Val Hedlund is the receptionist at NLAE 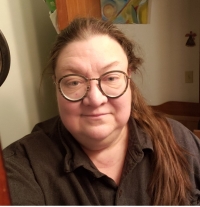 Was there an event or a person who inspired you to pursue your career path?
My Mom, who grew up on a 28-acre dairy farm, was my hero. After WWII, Mom put her address in the pockets of dresses donated to post war charities which resulted in German pen pals whom we met many times while living in Germany as well as the Midwest. John Deere sent our family to Heidelberg in the late 60s when I was a kid. Back in the Midwest, Mom constantly invited foreign people to join our household. Many Germans stayed at our house as well as Belgian flag dancers and eight Japanese students. This opened my mind to other cultures and opinions. My childhood in Germany and with foreign visitors has added to my enjoyment of reception desk duties, where I get to meet foreign scientists and visitors.

What attracted you to ARS or the NLAE?
I never wanted to work in an administrative job. I wanted to write jazz books, travel, and learn everything I could. I went to George Washington University in Washington DC, worked in the jazz department of Tower records and waitressed at the One Step Down Jazz Club. My interest in biology led me to the Bishop Museum, in Hawaii, the 3rd largest insect collection in the world, a dream job pinning beetles and weevils that had been collected in Papua New Guinea, Philippines, Tonga and Hawaii. The vocational rehab office at ISU placed me at my current job with USDA-ARS-NLAE.

If you could achieve any work-related accomplishment in the next 5-10 years what would it be and why would you choose it?
I’d finish my degree. I moved to Iowa in 2008 to study Biological Pre-Medical Illustration at Iowa State, but I could not get those last 9 credits. I was too ill from breast cancer and chemo.

Tell us something about yourself that might surprise people who know you?
Most people would be surprised to know that I have been visually impaired since 1992 and I taught myself to paint because I lost the ability to read. I relearned reading with cookbooks which were visually easy, and that is how I learned to cook.