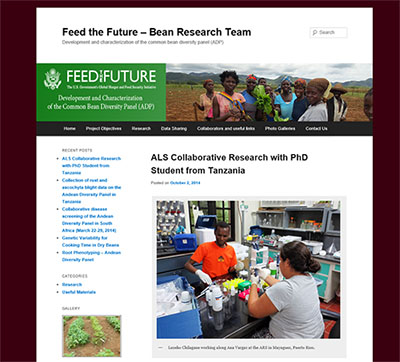 Beginning in 2011, the Norman Borlaug Commemorative Research Initiative between USAID Feed-the-Future and USDA-ARS has supported the collaborative research on common bean and tepary bean involving five USDA-ARS scientists, Phil Miklas, Karen Cichy, Mike Grusak, Talo Pastor-Corrales, and Tim Porch, and two researchers at the U. of Puerto Rico, James Beaver and Consuelo Estevez de Jensen, with the goal of increasing legume productivity in Feed the Future countries. The project has resulted in the development of tools, such as the Andean Diversity Panel (ADP) and the Phaseolus Improvement Cooperative (PIC) bulk-breeding populations, for characterization and improvement of major common bean production constraints.

The results to date include the characterization of disease and abiotic stress response, and information on bean seed nutrition, cooking time and composition; as well as the initiation of breeding efforts based on these characterization results including the selection of lines from PIC populations in target production environments in Africa and Central America. The project has also resulted in the development of new collaborations with scientists in Feed the Future countries, in the training of students from these countries, and in the development of approaches for the sharing of data, results and materials. One of these open data approaches is the FtF ARS Bean website, http://arsftfbean.uprm.edu/bean/, that shows current research efforts, a downloadable database of the ADP, and information and access to the PIC populations. In addition, a custom database will be available in 2015 that will allow for searching within the international ADP trials conducted to date. The database and website are maintained by the USDA-ARS in Mayaguez, PR, and are housed on a server at the University of Puerto Rico, Mayaguez, PR.