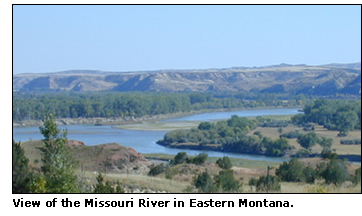 NPARL is situated in the "MonDak" region of the Northern Great Plains. This broad area is loosely defined as eastern Montana and western North Dakota, and is traversed by the Missouri and Yellowstone Rivers. The climate and soils of this region are highly variable resulting in a high risk for producers to maintain environmental and economic sustainability. The average annual precipitation is about 350 mm which is fairly evenly distributed throughout the year.

The two major commodities in the Northern Great Plains are spring wheat and beef cattle and calves, although durum wheat, alfalfa and sugar beets play a large part in the overall economic picture. Dryland production agriculture is best characterized as a spring wheat and fallow monoculture system. Irrigated production agriculture is focused around sugar beets with various small grains, corn and alfalfa and other crops in the rotation. A regionally sustainable agricultural industry is required to maintain the current quality of life.

Technological change has vastly increased the productivity of today's farms and ranches and has fostered specialization in either crop or livestock production, although many livestock producers raise grain and hay for feeding. However, many of the area's commodity producers earn the majority of their cash receipts from the sale of a single commodity in both dryland and irrigated production.  There is an obvious need to increase cropping diversity to spreak risk and reduce costs for growers to remain competitive in a global marketplace.

In recent years the crop sectors have faced record low commodity prices and rising production costs, while livestock prices are now high. The illusive search for alternative crops and value-added programs to bolster net farm income continues unabated. There is strong interest in growing potatoes but attempts to attract a processor to the area have thus far been unsuccessful. There has also been a strong effort to establish dairies in the region, but the distance to markets and a lack of local milk/cheese processing capacity has slowed progress. However, a new dairy cattle operation, Bostana, opened in 2004.

Some producers in this area of the Northern Great Plains produce both livestock and crops. This diversity often protects the farmer/rancher from large income fluctuations. This diversity has also led to increasing emphasis on whole farm systems. As producers move to alternative crops and cultural practices, interest in systems that integrate livestock and cropping systems has been spurred beyond the traditional practice of raising grain and hay for feed.

A considerable portion of the area is improved rangelands which are used for livestock grazing (primarily cow-calf operations). Other rangelands are part of Theodore Roosevelt National Park, Bureau of Land Management, state school sections and several Native American Reservations. These lands and river bottoms are vulnerable to invasive weeds like leafy spurge, Canada thistle, knapweeds and saltcedar. Various grasshopper species can also be a serious problems in these areas. 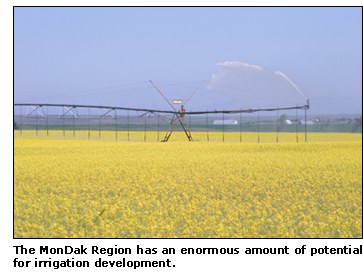 The area is also one of the last regions in the country available for irrigation development.  With the Missouri and Yellowstone Rivers both nearby, the region becomes very desirable for irrigation development and expansion. This area is potentially a highly productive food and export producing region. The environmental and legal concerns are large, but the favorable growing conditions, high quality and abundant water supplies and minimal problems with salinities of soils make the region a very desirable for economically sustainable expansion from a world perspective.

By virtue of the dry climate and the ability to precisely control soil water levels throughout the season through irrigation management, cultivation of specialty crops (e.g., seed crops, herbs, oil seed crops, biofuels, etc.) are highly likely. The geographic isolation make the cultivation of special crops that have been genetically modified, such as chemical plant feed stocks, pharmaceuticals and other uses, an attractive alternative to reduce the potential risk for cross-contamination. The capability to implement exact water and agrichemical management scenarios to achieve specific quality parameters in a particular crop will allow growers to better respond to economic conditions and produce high quality crops for niche markets. However, rigorous and highly efficient agricultural water management programs will be absolutely required if this development is to occur. The transition from dryland/livestock operations to high value irrigated agriculture is a huge step for new irrigated producers that will require a strong research and demonstration support base.

Approximately one third of all irrigation in the U.S. utilizes self-propelled (SP) center pivot and linear move irrigation systems. It is estimated that about 28,000hectares in the MonDak region are currently irrigated with these irrigation systems. In addition, there are plans for as much as another 250,000 hectares to be irrigated in the region within the next ten years, mostly with SP systems. There is also a considerable potential of conversions from surface irrigation to center pivot irrigation methods due to labor and water use efficiency concerns.