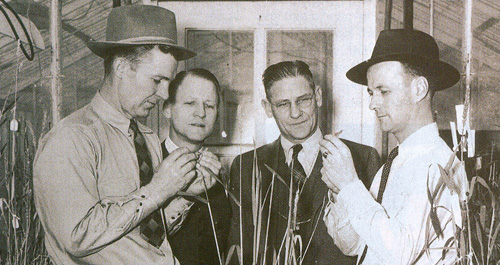 The need for drastically shorter and more lodging resistant winter wheats had become apparent after growers began planting winter wheat early and applying unusually heavy amounts of nitrogen fertilizers. Often accompanying the resultant unusually high grain yields was severely lodged grain. Varieties such as Omar and Brevor, which were considered to be highly resistant to lodging when released, often became severely lodged when managed for the new levels of production.

Being aware of our lodging problems, B.B. Bayles sent a collection of semidwarf wheats for preliminary observations at Pullman in 1949. From these, Norin 10 was selected to be crossed with Brevor which at that time Brevor was considered to be the most lodging resistant high yielding variety with short straw. The history of Norin 10 and its uses are given by Reitz (4).

The best segregates from this cross were not suitable for commercial use in Washington, and therefore many of them were crossed with many other varieties and hybrid segregates. A very large proportion of the new crosses produced no segregates worthy of further use. One selection, however, Norin 10 x Brevor, Selection 14 , was among those showing encouraging agronomic performances (5,6). Its greatest value, however, was a parent which contributed not only short, lodging resistant straw, but a greatly increased yield capability to breeding programs throughout the world.

Norin 10 appeared to be susceptible to every important plant disease in the PNW. In addition, a very high proportion of segregates from crosses with it were partially male-sterile. Also, nearly all of the best appearing segregates had a brittle rachis which would cause the heads to "snap off" from the stems when ripe and before they could be harvested. Consequently, any successful breeding for commercially acceptable semidwarfs required painstaking efforts and good luck in selecting and mating parents.

The first semidwarf winter wheat suitable for commercial production was Gaines, a soft white developed in Washington and released in 1961. It soon became the dominant variety with yields above 100 bushels being common under both dryland farming and irrigation. Its high resistance to lodging, shattering and all prevalent races of bunt encouraged (1) a widespread planting under irragation, (2) earlier planting in the fall for better control of soil erosion, and (3) greatly increased use of commercial fertilizers. However, it created new problems and intensified others.

The most baffling of the new problems is a combination of after-ripening dormancy of the seed, and short coleoptiles of the seedlings which caused difficulties in obtaining satisfactory stands of wheat in early fall planting. When planted sufficiently deep to be placed in moist soil the short coleoptile could not reach the soil surface and the seed leaf would wander under the soil surface and eventually die. Those eventually reaching the surface often were very weak, thereby resulting in reduced yields and unusually poor competition with weeds. Intensive efforts to develop new semidwarfs having a notably longer coleoptile and less after-ripening dormancy have resulted in a painfully slow development of at least some of the needed improvements.

Some of the milling industry voiced strong disapproval of Gaines, because it did not mill any easier than Brevor. Consequently, a sister selection of Gaines, named Nugaines, was released in 1965 because it milled notably faster and was more resistant to stripe rust. After its approval for release, we breeders were informed that the milling industry had adopted measures to permit milling of wheats comparable with Gaines and that they were resigned to accepting similar wheats. Nugaines largely replaced Gaines, primarily because it was the less severely injured by stripe rust.

With the widespread adoption of early planting came the need for new varieties more resistant to stripe rust, Cercosporella foot rot and lodging. Fortunately, the breeders have used a wide range of sources of resistance to stripe rust and have developed new resistant varieties. However, the appearance of new races have already outdated some new releases and late generation selections. For example, Moro, developed in Oregon, and Paha, developed in Washington, already have become victims of new races.

Breeding of semidwarfs resistant to Cercosporella foot rot has been very discouraging. The best progress in Washington, to date, is represented by a selection named Cerco. It has soft red grain, and therefore is useful only as a parent for additional breeding.

New and modified objectives facing breeders are the result of anticipated soil erosion regulations from the Environmental Protection Agency. These objectives are for the development of new varieties much better adapted to very early planting to control erosion on summerfallowed land, and for new varieties better adapted to minimum or no-till systems of wheat production. For the latter conditions a renewal of efforts to develop facultative varieties will be warranted. 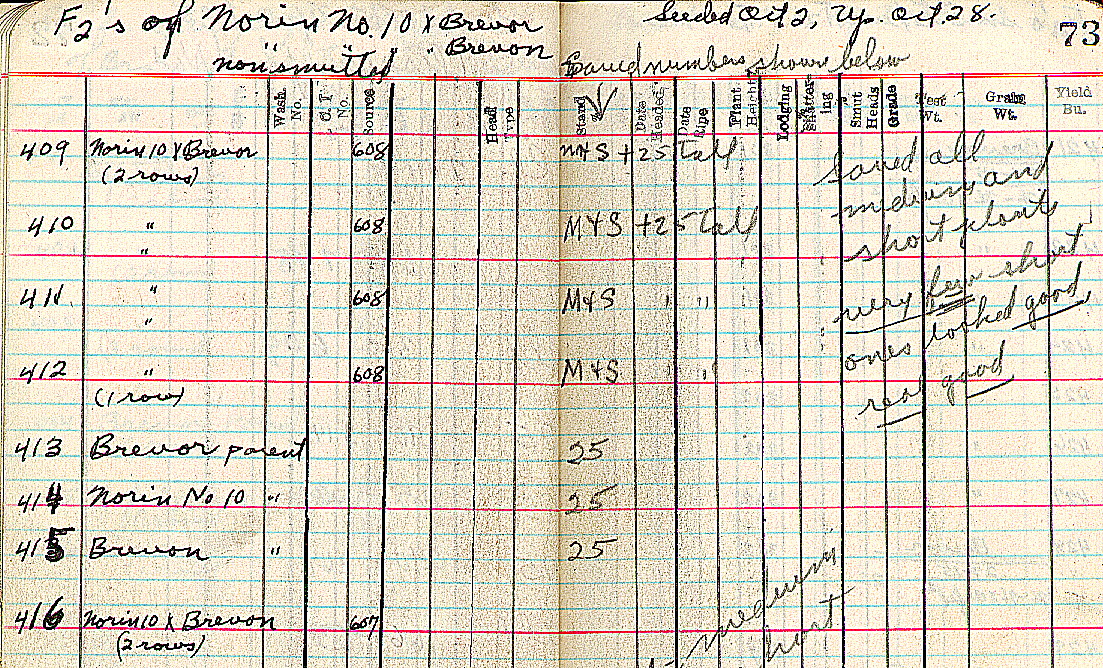