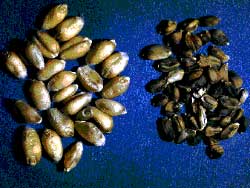 In 1995 the Brazilian government prohibited the entry of U.S. wheat because of concern over five plant-pathogenic fungi and the wheat seed gall nematode, Anguina tritici.

Most of the issues concerning the fungi were resolved rapidly. In contrast, Brazil remained convinced that the seed-transmitted nematode posed a major threat, primarily because some general literature described the species as "widespread" in the United States. Additionally, juvenile specimens of an unknown species had been detected in wheat sent to Brazil by agronomists for germplasm evaluation. (Adult specimens are required for morphological species determination.) 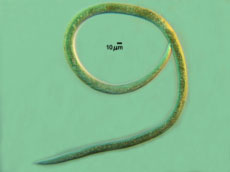 The USDA called upon the ARS Nematology Laboratory at Beltsville to provide expertise pertaining to the Brazilian concerns. This Laboratory is home to the USDA Nematode Collection, arguably the largest collection of plant-parasitic nematode reference specimens in the world.

Collection records indicated that the last detection of the wheat seed gall nematode in the United States was on a turf farm in Virginia in 1975. Laboratory personnel conducted an exhaustive survey of U.S. nematologists to confirm that 1975 was the last known detection.

Science-based information about the biology and distribution of the nematode was provided to Brazilian phytosanitary officials, and, in late 1998, hard red winter wheat from Gulf Coast ports was allowed entry into Brazil.

In a stunning policy reversal, in late 2000 Brazil prohibited the import of all U.S. wheat because of seed gall nematode concerns. Emergency negotiations resulted in a visiting team of Brazilian scientists being sent to the Nematology Laboratory to survey for the nematode in team-collected and Federal Grain Inspection Service-supplied wheat. One point of contention was that any Anguina specimens found would be of phytosanitary concern because of a belief that the genus was exotic to Brazil. From the American perspective, this was a troublesome issue because several Anguina species occur in the United States.

Fortunately, the USDA Nematode Collection again rescued the situation because it contained an obscure 50-year-old Anguina specimen originating in Brazil. Moreover, researchers at the Laboratory refined molecular methods for identification of Anguina juveniles and demonstrated them to the Brazilian visitors in the event that previously unidentifiable juveniles were discovered.

Brazil again imports most classes of wheat from most sections of the United States. Wheat exports to Brazil rose from nothing (1995-1998) to $10,000,000 annually (1999-2000). In the first two months of the 2002 marketing year (June and July), exports are at an annual rate of $160,000,000. This figure, which is 1,000 times the annual expense of maintaining the USDA Nematode Collection, clearly demonstrates the value of working systematics collections.