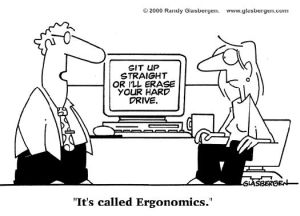 Repetitive motion injuries develop over time and occur when muscles and joints are stressed, tendons are inflamed, and nerves are pinched and the flow of blood is restricted. Standing and working in awkward positions in laboratory hoods/biological safety cabinets can also present ergonomic problems. By becoming familiar with how to control laboratory ergonomic risk factors, you can improve employee comfort, productivity, and job satisfaction while lowering chances for occupational injuries.

De Quervain's tenosynovitis, the most common disorder with tendon sheath swelling, occurs in the abductor (moving away from the midline) and extensor tendons of the thumb. These tendons share a common sheath, and swelling can affect both. Impingement on the tendon by swollen sheath and the production of excess synovial fluid can lead to loss of tendon function.

De Quervain's tenosynovitis, which is commonly recognized as an occupational disorder, may be precipitated by forceful grasping and turning, particularly of hard objects such as vials. Symptoms include swelling, pain and tenderness at the base of the thumb. Pain is aggravated by attempts to extend the thumb. Flexion and adduction may produce a "trigger" effect or popping sensation.

Carpal tunnel syndrome is the most common nerve entrapment disorder. Symptoms result from compression of the median nerve as it passes through the wrist within the carpal tunnel, a narrow, confined space formed by the eight carpal bones and the transverse carpal ligament.

Within this limited space, swelling of any of the components can increase pressure in the tunnel. Because the median nerve provides both sensory (feeling) and motor (muscular movement ) innervation to both the thumb and middle three fingers, damage can result in pain and disability.

Although it has been extensively studied, carpal tunnel syndrome still remains a subject of controversy in terms of etiology, relation to work, diagnosis and treatment. However, its association with cumulative occupational trauma is becoming more generally accepted.

Early symptoms include numbness, painful tingling, and burning pain and weakness in the thumb and first three fingers. These symptoms are often precipitated by repetitive hand or finger actions, but nocturnal symptoms that wake the patient are common. Shaking the hand may bring relief. Sensory loss in the ring finger frequently occurs only on the lateral (away from the body) side. Numbness rarely radiates proximal to the wrist, but sometimes the forearm and shoulder aches. Typically the dominant hand is most affected, with involvement of the other hand being evident only upon electrodiagnostic studies. Weakness eventually develops in the muscles that abduct and oppose the thumb. In advanced cases, the thumb cannot move properly in opposition to the other fingers, and the worker may drop objects.

Two of the best documented work related disorders are tendonitis and tenosynovitis. Both are painful and disabling and play a role in nerve compression syndromes. Tendonitis-inflammation of the tendon (fibrous band connecting skeletal muscle to bone) - can effect any extremity, but in the workplace, it is most common in the wrist and fingers. Tenosynovitis is inflammation of the synovial sheath that encloses tendons running within fibro-osseous (having both connective tissue and bone) tunnels. The sheath's inner membrane secretes a viscous fluid that lubricates the joint, and this secretion increases during an inflammatory process.

Tendonitis, which is often accompanied or preceded by tenosynovitis, is common among people who perform repetitive work, especially when a tendon rubs against other structures as it passes through a fibro-osseous tunnel. Occupational risk factors include repetitive tension and motion, bending and vibration. Risk increases with age, due to tendon stiffening.

Rotator cuff tendonitis is a shoulder disorder characterized by inflammation of the supraspinatus muscle to the humerus (upper arm bone). Rotator cuff tendonitis has several causes, which may be classified as extrinsic (due to mechanical impingement from outside of the cuff) or intrinsic (due to changes within the cuff, such as aging or diminished vascular supply). In primary mechanical impingement, elevation of the arm leads to pressing of the supraspinatus tendon against the acromion. When this is repetitive or excessive, the resulting irritation and ischemia (reduction in blood supply) lead to rotator cuff tendonitis.

The primary symptoms of rotator cuff tendonitis is shoulder pain, sometimes radiating down the arm. Generally tendonitis pain is exacerbated by movement and relieved by rest, but it may occur at night also, especially if the cause is impingement. Movement may be limited by pain, stiffness or weakness. Rotator cuff injuries are common among workers who perform repetitive tasks with their elbows above mid-torso height, particularly if their arms are raised overhead.

Thoracic outlet syndrome consists of upper extremity symptoms resulting from pressure on nerves of blood vessels between the base of the neck and the axilla (armpit). The syndrome may involve any of the several structures in the thoracic region, and symptoms make it difficult to distinguish the specific area.

Structures that are subject to compression are usually the nerves of the brachial plexus (the braid of nerve fibers formed by the anterior branches of cervical nerves C5-C8 and thoracic nerve T1; it begins in the base of the neck and extends into the axilla, where it divides into the major nerves of the arm). Less commonly (in fewer that 10 % of cases), the subclavian artery or vein is compressed.

Symptoms include neck pain, arm weakness and numbness extending along the inner forearm into the medial two fingers. Symptoms may be precipitated or aggravated by postural changes, especially arm elevation. Vascular symptoms are aching or throbbing in the arms, coldness and periodic blanching of the fingers. Diagnosis is difficult because many physical signs are nonspecific.

The wrist ganglion is considered by many to be a herniation of the joint capsule or of the synovial sheath of the tendon; other authorities believe it to be a cystic structure. It usually appears slowly after a wrist strain and contains a clear, mucous fluid. The ganglion most often appears on the back of the wrist, but can appear at any tendonous point in the wrist or hand. They are often treated surgically.

The trigger finger or thumb is an example of stenosing tenosynovitis, which is a condition where the tendon surface becomes irritated and rough, the sheath becomes inflamed, and the tendon sheath undergoes progressive constriction. It most commonly occurs in a flexor tendon that runs through a common sheath with other tendons. Thickening of the sheath or tendon occur, thus constricting the sliding tendon. A nodule in the synovium of the sheath adds to the difficulty of gliding. The worker complains that when the finger or thumb is flexed, there is resistance to re-extension, producing a snapping that is both palpable and audible.

Back injuries are categorized as ergonomic disorders when they result from chronic, or long term injury to the back rather than from one specific incident. Once back muscles or ligaments are injured from repetitive pulling and straining, additional injuries are more likely to occur because the back muscles, discs and ligaments may be scarred and weakened and can lose their ability to support the back.