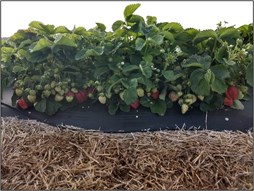 Description of fruit: ‘Cordial’ follows ‘Keepsake’ as the second cultivar resulting from a USDA-ARS effort at Beltsville, MD, to develop strawberries with increased shelf life. ‘Cordial’ and ‘Keepsake’ strawberries had similarly low proportions of rot and degradation in two weeks of refrigerated storage, compared with other cultivars and breeding selections. ‘Cordial’ has consistently provided very high yields and very low rot with no fumigation or fungicides in annual plasticulture at Beltsville, MD. ‘Cordial’ strawberries are large and attractive, quite firm, and tough enough for handling. The name, ‘Cordial’, is in reference to the flavor being “friendly”, and not tart, even in rainy weather. ‘Cordial’ is expected to be adapted to the Mid-Atlantic and regions with similar climate. 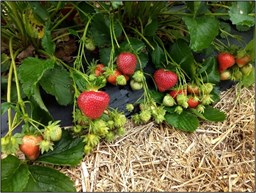 Description of fruit: ‘Keepsake’, trialed as B1806, is the first cultivar resulting from a USDA-ARS effort at Beltsville, MD, to develop strawberries with increased shelf life. Compared with other current cultivars and breeding selections evaluated after two weeks in cold storage, ‘Keepsake’ strawberries had a lower proportion of degraded fruits and low rot. The fruits have outstanding flavor with high percent soluble solids and moderate acidity. They have a pleasing texture and are juicy when eaten. ‘Keepsake’ has consistently provided competitive yields and low field rot with no fumigation or fungicides in annual plasticulture at Beltsville, MD. ‘Keepsake’ fruit are attractive with good size, color, gloss, and a showy calyx. They are quite firm, and tough enough for handling. ‘Keepsake’ was named for its exceptional quality and shelf life. 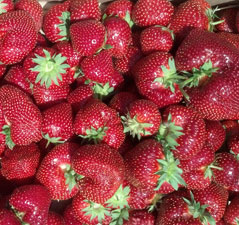 Description of fruit: ‘Flavorfest' was trialed as B1033 and has consistently performed as a top-yielding, large-fruited selection in the plasticulture production system at Beltsville, MD. 'Flavorfest' fruit have excellent flavor, are large, bright red, and appear distinctively plump. Fruiting season in plasticulture is similar to that of 'Chandler,' in that it is longer than most other cultivars and peaks at the same time. 'Flavorfest' has shown no susceptibility to anthracnose crown and fruit rot in the Beltsville fields. 'Flavorfest' is resistant or tolerant to most of the stem and leaf diseases. Percentage of 'Flavorfest' fruits showing Botrytis fruit rot, when harvested from untreated fields, is similar to or lower than other currently available mid-season cultivars grown in the Mid-Atlantic.

Commercial Endorsement Disclaimer
"The use of trade, firm, or corporation names in this webpage is for the information and convenience of the reader. Such use does not constitute an official endorsement or approval by the United States Department of Agriculture or the Agricultural Research Service of any product or service to the exclusion of others that may be suitable."