Wheat is a major food crop in the world and sustains the majority of the world's population. Wheat fields occupy more of the earth's surface than do fields of any other food crop. Stem rust is one of the most important wheat diseases limiting production in many areas of the world. The disease has been important throughout the ages. The Romans, in order to please the rust god, Robigus, held a festival called Robigalia. 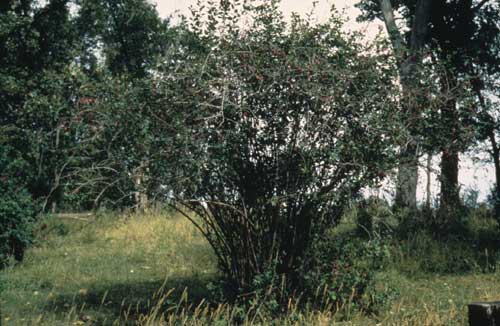 The common barberry was brought to North America by early settlers from Europe, where it had been widely grown for medicinal purposes. The medicinal uses were important enough that barberries were planted in monastery gardens throughout southern Europe. The long, straight lightwood of the barberry branches made excellent handles for hand tools. Barberries also made an excellent hedge because their dense growth and sharp spines discouraged penetration by livestock and poultry. In America the fruit became a favorite for sauces, jellies, wines and preserves and the bark was used as a source of yellow dye. Thus, the barberry became established in areas where it was a close neighbor to the small grain cereals, and both were moved by farmers as agriculture spread west in the early 1800s. The common barberry adapted well throughout much of the Midwest and became widespread locally as seeds were spread by birds, animals, and water.

The disadvantage of growing barberries and small grain cereals together was recognized by European farmers long before it was know that barberry was the alternate host for the fungus causing stem rust. In Rouen, France a law was passed in 1660 to outlaw the growing of barberry bushes, nearly 200 years before the German scientist A. DeBary proved that the rust on barberry in the spring was the same fungus that caused stem rust of small grain cereals in the summer and the fall. The earliest local laws against growing barberry in the Americas were passed in Connecticut in 1726, Massachusetts in 1754, and Rhode Island in 1766, but enforcement of these laws lapsed as wheat declined in importance in New England.

After the disastrous epidemic of 1916, laws against the growing of barberry were passed in the important wheat-producing states of South Dakota and North Dakota (1917).; Michigan, Minnesota, Nebraska, and Colorado (1918); and Illinois, Indiana, Iowa, Montana, Ohio, Wisconsin, and Wyoming (1919). A cooperative federal and state program on barberry eradication was started in these states in 1918, with E. C. Stakman as its head. Six states joined the program later: Washington in 1923; Missouri, Pennsylvania, Virginia, and West Virginia in 1935; and Kansas in 1955. 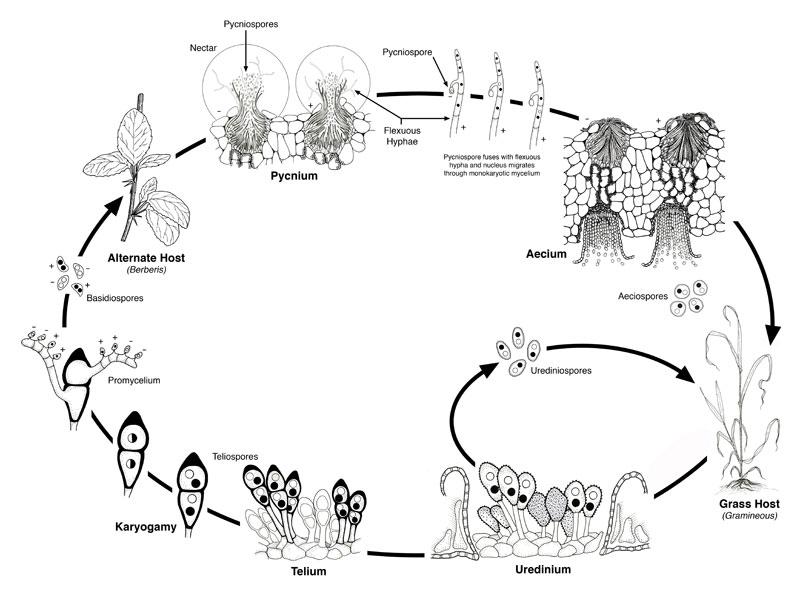 Barberry eradication was visualized as a way to break the rust cycle and prevent local outbreaks of stem rust principally on wheat and oats in order to maximize grain production during the period of World War I. The barberry eradication program varied in scope over the years principally because of the level of state and federal support. Eradication was supplemented in 1919 by the issuance of Federal Quarantine No. 38 to prevent the interstate movement and reestablishment of susceptible barberries. A program was established to test species and cultivars of Berberis, Mahonia and Mahoberberis for reaction to P. graminis. Those found to be susceptible were not permitted in the commercial trade and were destroyed if found in the eradication area. Untested stocks were destroyed or held without further propagation until the response to stem rust was determined so that appropriate action could be taken. During 1975 through 1980 the federal eradication program was gradually terminated. The states now are independently responsible for eradication. The federal program continues to test new cultivars and species for resistance to rust and to inspect bushes in commercial trade.