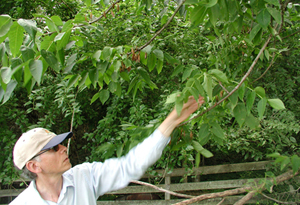 The most critical areas to sample are those closest to EAB infestations. The trees in those areas will be totally or largely lost if immediate efforts are not made to preserve them. A distribution map showing all identified Emerald Ash Borer infestations and quarantine areas is shown in our Maps area and is regularly updated on the Internet at:
http://emeraldashborer.info/files/MultiState_EABpos.pdf.

We would like to focus seed collections on states with infested counties and surrounding areas. Our initial focus will center on the five most widespread Fraxinus species in eastern North America:

Range maps of these are shown in our Maps area.

Ideally, the full ecogeographic ranges of these species will be sampled in a stratified fashion. In part, this can be accomplished by acquiring samples from as many Omernik Level III ecoregions as possible from throughout the native ranges. A copy of the Omernik Level III ecoregion map for North America can be obtained from:
ftp://ftp.epa.gov/wed/ecoregions/cec_na/NA_LEVEL_III.pdf. (Note: This takes some time to download)

Fraxinus species are widespread throughout the eastern and central United States, with other North American taxa found in isolated parts of the southwestern and western United States. Trying to identify suitable native populations of Fraxinus that are worthy of collecting comes with experience and can initially be difficult. However, a few simple guidelines can be followed in order to ensure high-quality samples are collected: