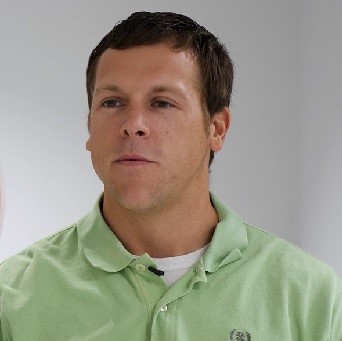 Dr. Benjamin “Ben” Fallen joined the Soybean and Nitrogen Fixation Unit in Raleigh, NC as Research Geneticist in Spring 2020.  Dr. Fallen grew up on a tobacco farm in Halifax Co., Virginia.  He received a BS in Crop and Soil Environmental Sciences with a minor in Biotechnology and Genetics from Virginia Polytechnic Institute and State University (VT) in 2006.  He went on to complete an MS and Ph.D. at the University of Tennessee, focusing on the detection of soybean amino acid QTL and seed yield QTL using selective genotyping.  He received both degrees while working full-time as a research technician under Dr. Vince Pantalone.   In 2013, he was recruited by Clemson University to lead the Soybean Breeding and Genetics Program.  During his 14 years of soybean research, his work resulted in 16 publications and he released 6 varieties, 1 germplasm line, and 4 more varieties pending release.  Dr. Fallen has established a network of scientists and collaborators both nationally and internationally to pursue team research focused on improving soybean production and quality.  Outside of work hours, Dr. Fallen spends time with his family; wife Heather, and 3 young boys.

Research Focus: Provide genetic solutions to improve soybean production that will ultimately lead to new soybean germplasm lines and cultivars to improve profitability for farmers and increase agricultural sustainability.  Research interests include a) Increasing Genetic Diversity: Wild soybean is the ancestor of domesticated soybeans produced today and is mainly distributed in the Southeast and Far East Asia including China, Japan, Korea, Taiwan, and Russia. Wild soybean is an annual, weed-like, climbing pioneer of secondary successions that look very different from today’s domesticated soybean.  Despite what may sound like undesirable attributes, wild soybean has been shown to contain a genetic treasure trove of genes for higher oil and protein contents, drought resistance, high heat tolerance, disease resistance, pest resistance, and other important traits, b) Drought Tolerance: Drought is a major factor causing low yield and lost income for soybean farmers in the US.  To help soybean plants better tolerate drought conditions two mechanisms have been utilized, sustained nitrogen fixation and slow wilting.  Our research shows that drought tolerance can raise yields by 5 to 8 bu/ac under stress, and c) Flood Tolerance: Farmers have experienced very wet weather for at least some part of most growing seasons in the last decade due to hurricanes, floods, and other events.  Flooding reduces the oxygen supply to the roots, builds up to toxic respired carbon dioxide in the soil, and promotes crippling root diseases.  Our research suggests that drought and flood tolerances may be related.  This discovery could improve the development of abiotic stress-tolerant soybean varieties, which is essential in pursuing agricultural sustainability.