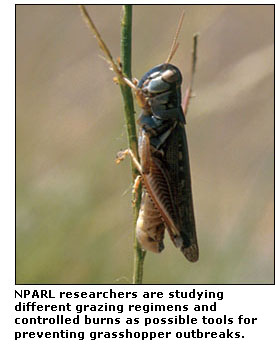 World-wide, grasshoppers and locusts are among the most economically important pests. Grasshoppers are an important native component of grassland ecosystems in the U.S., playing a role in nutrient cycling and serving as a critical food supply for wildlife. However, grasshoppers often reach outbreak densities in western North American grasslands, causing significant economic impact to the grazing industry from feeding, especially during drought periods when forage is already scarce. In addition, these outbreaks serve as a source of mass migration from large expanses of public rangeland to adjacent private cropland. It has been estimated that grasshoppers annually destroy on average at least 21 to 23% of available range forage in the western U.S. Traditional crisis-directed chemical control programs are economical only under certain conditions, do not provide predictable long-term control, have potentially important non-target effects, and may even exacerbate grasshopper problems.

Due to the historical emphasis on grasshopper outbreak suppression and intervention, ecologically-based preventative management of grasshoppers has received limited attention. We are examining the use of habitat management techniques such as burning or livestock grazing on rangeland as a method of manipulating the quality of habitat available for grasshoppers and/or their primary predators, and as a result, reducing grasshopper outbreaks. A promising ARS study found that during an outbreak period both grasshopper densities and forage consumption were five to nine times lower in twice-over-rotational grazing pastures than in season-long grazing pastures. We have also found that late-summer or fall fires in the northern Great Plains lead to reduced grasshopper populations in the year following a fire, suggesting that fire may be useful as a management tool for grasshoppers.