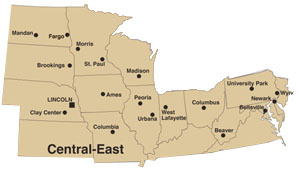 The Central-East Regional Biomass Research Center (CERBRC) is a network of existing USDA-ARS facilities and scientists located in Nebraska, North Dakota, South Dakota, Kansas, Minnesota, Iowa, Missouri, Wisconsin, Illinois, Indiana, Ohio, West Virginia, Pennsylvania, and Maryland. The CERBRC is a multidisciplinary research organization focused on agricultural feedstocks and environmental sustainability in the Great Plains, Midwest, and eastern US. CERBRC is one of five regional USDA Biomass Research Centers established in 2010 by the USDA Secretary's Office of Science to coordinate different research disciplines and approaches within ARS leading to development of integrated solutions contributing to sustainable biofuel supply chains based on agricultural feedstocks.

The CERBRC has three research focus areas: (1) Feedstock Development, (2) Feedstock Production, and (3) Feedstock Conversion. The main research focus is on the development of perennial grasses and biomass sorghum, along with significant coordination of research on corn grain ethanol and corn stover management, collection, and conversion. Emphasis is on integrating dedicated feedstock production into central-eastern agricultural production systems to enhance water and air quality and to minimize the adverse affects of bioenergy on existing agricultural markets.

Research has resulted in new information on how switchgrass and ethanol yields are affected by nitrogen fertility, harvest management, herbicide tolerance, and stand establishment. The Central-East team has used this information to develop a basic set of management guidelines and cultivars for large-scale production of switchgrass as a biomass energy crop in the Central Great Plains and the Midwest.

Current research emphasizes increasing system efficiency through introduction of nitrogen-fixing plants and cover crops into the production systems. Integrating perennial grass feedstocks into these systems may be a way to help reduce nutrient escape from fields to surface and ground waters and to reduce greenhouse gas emissions and increase carbon sequestration.

Development of improved perennial grasses for bioenergy feedstocks is led by scientists at Lincoln, NE and Madison, WI. Additionally, development of germplasm for biomass-type sorghums is led by scientists at Lincoln, NE. Scientists develop new feedstocks for increased yield and conversion characteristics through collaborations with agronomists, molecular biologists and chemical engineers. New feedstocks are field-tested to select for disease and insect resistance and to determine their suitability for production in different growing environments throughout the region. The chemical composition of feedstocks is a major emphasis to determine characteristics that influence thermo-chemical conversion and ethanol yield.

A recent accomplishment of the feedstock development team is the release of 'Liberty' switchgrass, an improved bioenergy-type switchgrass cultivar with high biomass yield for use in the northern half of the USA. Liberty was developed by ARS researchers by crossing northern upland and southern lowland plants followed by three generations of breeding for winter survival, high biomass yield, and low stem lignin concentration. In a 3-year yield trial in NE, WI, and IL, Liberty had excellent winter survival and in eastern NE and northern IL had biomass yields were over 2 tons per acre greater than the best available released upland cultivars. Liberty is the first bioenergy type cultivar for the Midwest and the northern Great Plains and will likely be used in the Northeast states.

The production of perennial grasses for bioenergy feedstocks is led by scientists at Lincoln, NE and University Park, PA. All field management practices for perennial grasses such as stand establishment, weed control, fertility management, harvest management, and feedstock storage are conducted to determine best management practices for growing various bioenergy feedstocks. Studies are undertaken to identify optimal landscape locations for integrating biofuel crops into traditional cropping systems and to determine how existing resources such as the Conservation Reserve Program may contribute to feedstock supplies. Additionally, scientists are evaluating all aspects of using crop residues such as corn stover as a bioenergy feedstock. Scientists at Ames, IA, Lincoln, NE, Mandan, ND, Morris, MN, St. Paul, MN, and University Park, PA are evaluating topics such as how much crop residue must be retained on the landscape to prevent environmental degradation, the economics of stover removal, greenhouse gas emissions from annual and perennial feedstocks, the role of cover crops in bioenergy, and the long-term effects of stover removal of soil health.

Scientists evaluate the biochemical and thermochemical conversion of various agricultural feedstocks (switchgrass, big bluestem, indiangrass, perennial grass mixtures, biomass sorghum, and crop residues). Collaborative research on feedstock conversion in the CERBRC is led by scientists at Peoria, IL and Wyndmoor, PA. The Central-East team developed the first near-infrared (NIR) method to measure 20 components in switchgrass that determine its potential value as a biofuel feedstock. Using NIR, they tested switchgrass varieties and experimental lines and found significant differences in the amount of ethanol that can be produced using current technologies and the amount that could be produced when technology is available for commercial-scale conversion of the plant sugars. This was calculated as actual and potential ethanol yield per ton and per acre. Results indicated that NIRS could accurately estimate ethanol yields of switchgrass for about $5 a sample.