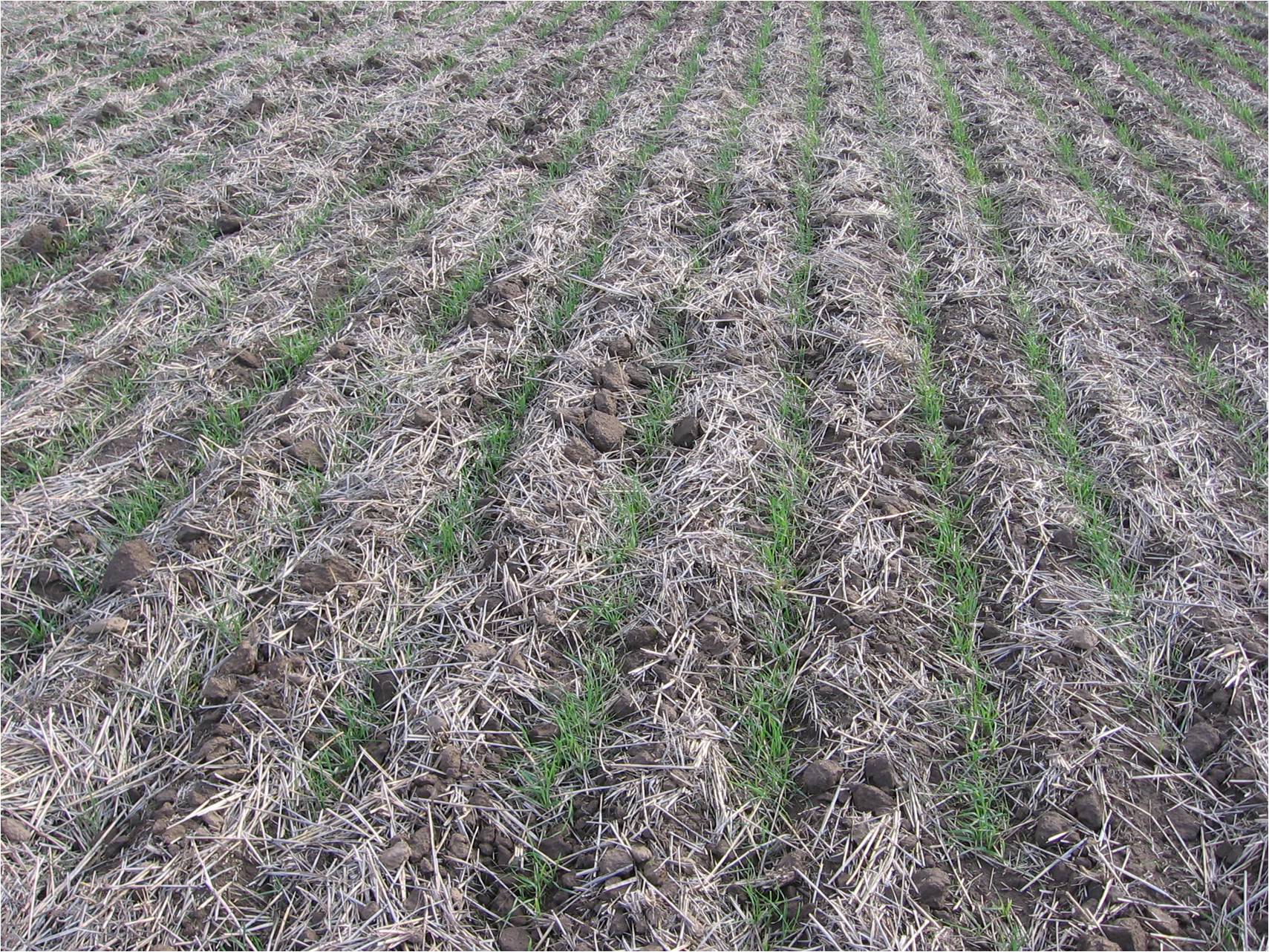 Ecology is the study of the relationship between living organisms and their environment. The Soil Ecology effort at the USDA-ARS Columbia Plateau Conservation Research Center near Pendleton, Oregon is focused on the soil environment created in our non-irrigated wheat production systems. Tillage has a major effect on soil organisms, heat and water flow, and the position and types of organic matter accumulated in soil. Our soil ecology program has studied the germination of wheat seed, the influences of tillage and no-till cropping practices on water infiltration and earthworm populations, and the effects of different tillage practices on evaporation of water from fallow fields during the summer.

Note: For details and downloadable publications related to these projects, see Stewart Wuest.

The most important factor determining whether rain or snow-melt water will be absorbed versus running off of soil is the ability of the soil surface to resist slaking and reconsolidation, also known as crusting. Slaking is when wet soil aggregates (tiny clusters or clumps of soil) break apart into smaller aggregates or separate particles. When very small aggregates or individual sand, silt, and clay particles are free to move with the movement of water, they settle into a very compact layer. When this layer dries, we recognize it as a crust, but even when it is wet this layer is nearly impermeable to water.

Root channels, pores, and cracks that develop over time in an untilled soil are not nearly as important to water infiltration as the prevention of surface crusting. Continuous soil pores only play a role in water infiltration if they happen to open at the surface in a place where water has accumulated. In a soil where crusts are forming, these pores are quickly sealed by slaked soil. In a soil where aggregates are protected and strong enough to resist slaking, there is very little water accumulation at the surface.

Surface residue helps protect aggregates from slaking. It reduces the action of rain, snow, freezing, thawing, wetting and drying that tends to break soil aggregates apart. This is why erosion prediction models give significant credit for the amount of surface residue cover. Surface residue improves water infiltration and reduces runoff and erosion even on intensively tilled soils. Even more important to long-term improvement in water infiltration is the role of residue as a source of organic matter. Higher levels of organic matter in surface soil creates stronger soil aggregation, which greatly reduces crust formation. 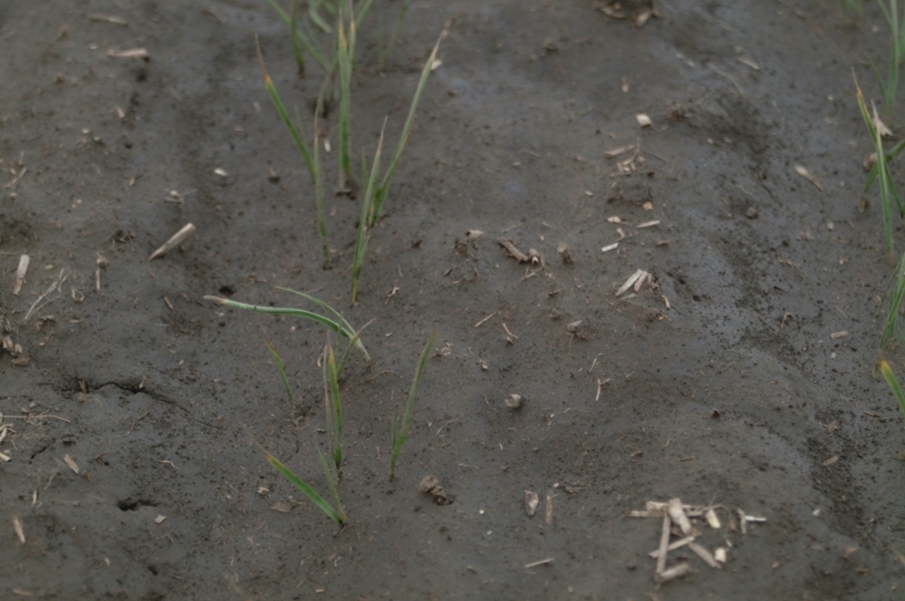 It has been commonly assumed that seeds absorb most of the water they need for germination as liquid through seed-to-soil contact. Seeds are also exposed to water vapor in soil. In water uptake models, procedures used to estimate potential vapor absorption have underappreciated the effect of distance on diffusion rate, and underestimated the contribution of vapor. On the other hand, the amount of seed-to-soil contact that actually exists in soil is often overestimated. We conducted several experiments that demonstrated rapid absorption of water and germination without any soil contact at all, meaning adequate amounts of water were absorbed as vapor. This makes sense, since relative humidity of soil air remains near 100% through a wide range of soil moisture contents. The combined evidence contradicts the assumption that seed-soil contact is important for imbibition of water by seeds. Water vapor should be considered the primary source of water for seeds in unsaturated soils. We also recently completed work which established that wheat cultivars grown in the Pacific Northwest will germinate rapidly when the soil water potential surrounding the seed is above -1.1 MPa, (11 bars, equivalent to about 6 to 9% water content in Pacific Northwest soils), and will germinate well but more slowly in soils as dry as -1.6 MPa (16 bars, equivalent to about 5 to 8% water content).

Standard soil sampling methods and data analysis result in a complete confounding of soil constituent analysis with soil bulk density changes. This causes a measurement bias when comparing tillage systems for water, carbon, or other soil constituents. We verified that measuring dry soil mass per unit area to establish depth instead of the typical distance from the soil surface (e.g. 0 to 4 inches, etc) is completely independent of soil bulk density and is much more effective for comparing soil water profiles or soil carbon differences between different tillage systems. This is very important when looking for changes over time, since soil bulk density fluctuates over time also. We also demonstrated that this method is capable of overcoming biases between operators and sampling techniques.

The Inland Pacific Northwest is an excellent environment for the production of winter wheat. The Mediterranean climate results in mild to cold winters and hot dry summers, with 70% of precipitation falling from October to March, and most of the rest falling from April to June. The native vegetation was dominated by cool season perennial bunch grasses and sagebrush that made use of stored soil water as spring quickly warms into a hot, dry summer and growth halts due to an almost complete lack of precipitation. Early settlers found that winter wheat was a highly productive crop which produced adequate yields even in years when spring rains were sparse. Spring crops, on the other hand, are not able to develop root systems capable of reaching water stored deep in the soil profile before hot, dry weather arrives. 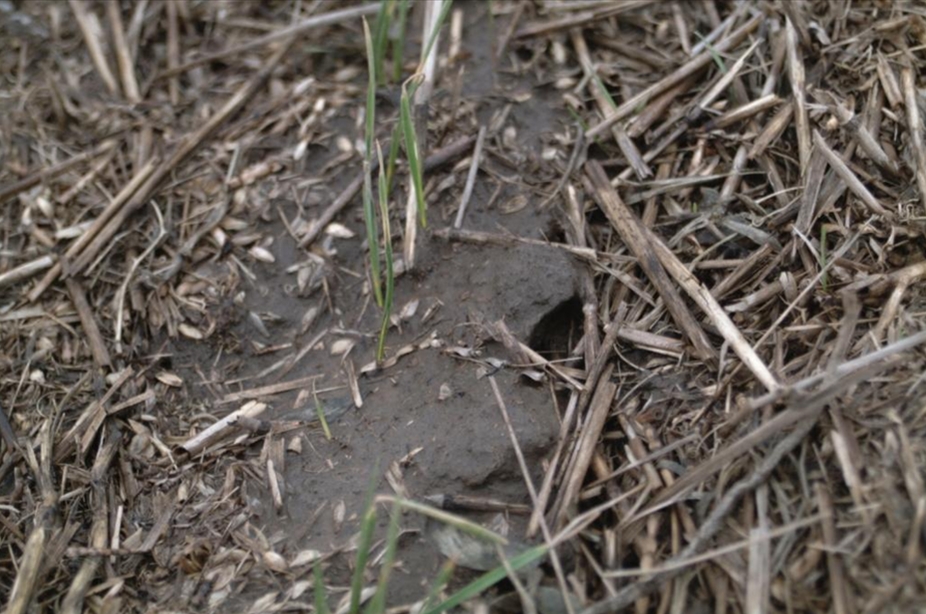 A major challenge in growing winter wheat in the driest half of the region where precipitation is < 350 mm (14 inches) is establishing the crop before the weather turns cold in November. Substantial fall precipitation after the summer drought often does not occur until mid- to late October, providing little time to seed a crop into surface moisture and have plants put down roots and harden before cold winter weather. A solution to the problem is to grow winter wheat in rotation with a fallow year, meaning that the ground is without a crop the entire winter and summer following July harvest of the previous crop. This so-called "summer fallow" year allows about 30% of the precipitation occurring during the fallow period to be stored in the soil for seeding of the winter wheat in September. Early farmers found that frequent, shallow tillage for weed control created a soil mulch which kept the soil below it moist. In the late 1960s special deep furrow drills were developed to seed into this deep moisture. Thus, a crop could be established with reasonable reliability even in the absence of any fall rain. This system of tilled summer fallow with a relatively fine dust mulch is still the basic practice in much of the region. The major drawback is that the soil is very susceptible to wind and water erosion. No-till summer fallow has been successfully adopted in certain regions, such as the U.S. Great Plains where early fall rains are likely, and in areas of the Inland Pacific Northwest that receive more than 380 mm (15 inches) of annual precipitation. No-till provides excellent water infiltration and erosion control. Without a mulch of tilled soil on the surface, however, summertime soil drying is too deep to allow early seeding into adequate water, even using deep-furrow drills. At some locations, such as throughout east-central Washington, a failure to establish the crop early causes substantial yield reductions.

Farmers need a tillage method that preserves seed-zone water and resists erosion by wind and water. In agreement with work in Washington, our recent investigations on timing, depth, and intensity of tillage show that highly tilled soil mulches are not necessary for effective evaporation reduction. To take advantage of these findings, we are currently working to develop detailed prescriptions for producing effective coarse mulches on major soils of the region. In addition, we are working on guidelines for timing of spring tillage to minimize evaporative loss without reducing infiltration of spring precipitation. Adoption of these reduced tillage methods on land currently under intensive tillage will greatly reduce soil erosion by wind and water. It will also reduce fuel usage, and should eliminate the possibility of needing to reseed due to soil crusting after seeding.