Using this immunomarking technique, ALARC scientists are collaborating with researchers throughout the world to study the dispersal patterns of a wide variety of agricultural and household pests (e.g., lygus, spotted-wing Drosophila, bed bugs), natural enemies (insect predators and parasitoids), and pollinators (e.g., honey bees, bumble bees). Every year, more and more people are finding ways to use immunomarking as part of their research thanks to the low cost and simplicity of this system.

This project was funded, in part, by the USDA-CSREES Pest Management Alternatives Program (PMAP).

Identification of critical genes in the western tarnished plant bug. Although the western tarnished plant bug is widely recognized as an important crop pest in the western U.S., little information is available regarding its molecular biology and physiology. We identified 65 members of a gene family (the ABC transporters) known from other organisms to function in protein synthesis, reproductive development, and the elimination of toxins. A subset of these genes likely to function in pesticide resistance was further identified. These results suggest possible targets for genetic-based pest control and provides a broad baseline for future research to develop species-specific non-insecticidal control tactics. Contact: Joe.Hull@ars.usda.gov

Insects that feed on many types of host plants are often exposed to a variety of plant defensive chemicals that are toxic to the insect. The mechanisms these insects use to eliminate or detoxify plant defensive chemicals may also deactivate certain insecticides. We identified a suite of detoxification enzymes in the silverleaf whitefly that are stimulated when the insects feed on specific hosts. Increased tolerance to selected insecticides was also associated with increased activity of the detoxification enzymes. Improved understanding of the influence of host plant on the effectiveness of insecticides is an important consideration to the design of sustainable management strategies for the silverleaf whitefly. Contact: Steven.Castle@ars.usda.gov

Although the pink bollworm is a major cotton pest worldwide, the advent of insecticidal Bt cotton has revolutionized management and suppression of this pest. However, recent emergence of highly-resistant field populations of pink bollworm in Asia accentuates the need to understand the molecular basis of Bt-resistance. Research at ALARC scientists in collaboration with the University of Arizona, analyzed field-collected pink bollworm from India, they found a diversity of genetic changes conferring resistance, including a novel mechanism called alternative splicing. These findings represent the first example of alternative splicing associated with Bt resistance that developed in the field. Because a diversity of resistance mechanisms were identified from only a few field-collected pink bollworm, current methods to detect resistance based on specific genetic changes may not be effective. Contact: Jeff.Fabrick@ars.usda.gov

Development of direct seeding methods for guayule, a natural source for rubber.

Guayule,Parthenium argentatum, is a desert shrub that produces latex in bark tissues and represents a potential domestic source of natural rubber. One of the major challenges for cultivating guayule, however, is that the plant must be hand-sown using seedlings, which significantly increases the costs and labor associated with crop production. ALARC scientists with the University of Arizona, Cornell University, West Virginia University, and Seed Dynamics Incorporated of Salinas, California, developed direct-seeding methods for guayule and optimized conditions for seed germination and seedling establishment. The results of these studies will directly impact the guayule industry and underpin future efforts to further improve guayule cultivation and agronomics.

Cotton plants are sensitive to abiotic stresses including sudden episodes of cold temperature during the early parts of the growing season, and heat and drought encountered during the latter parts of the growing season. ALARC scientists in collaboration with scientists at the University of North Texas, Cornell University, Brigham Young University, and West Virginia University, identified and characterized a large gene family in cotton that is responsible for the production of omega-3 fatty acids. Omega-3 fatty acids are involved in both chilling adaptation as well as heat and drought response in plants. Knowledge of this gene family in cotton provides key insight to the genes that underlie abiotic stress response in commercially important varieties. Notably, a single gene was identified whose expression was upregulated during both drought and cold temperature response in cotton. This provides information that will underpin future efforts to improve cotton germplasm using molecular breeding approaches. Contact: John.Dyer@ars.usda.gov

Determination of the upper lethal growing-season-long-average air temperature for wheat.

In order to adapt wheat production to global warming, a dataset was needed to test the high-temperature aspects of wheat growth models. ALARC scientists in collaboration with scientists at the University of Arizona, Tucson, Arizona, conducted a Hot Serial Cereal Experiment. Cereal because the crop was wheat, Serial because the wheat was planted about every six weeks for two years in hot Arizona, and Hot because on six of the planting dates, infrared heaters were deployed above some of the plots to provide additional warming. Results showed that yields decreased as season-long-average air temperatures increased above 15C, reaching a crop-failure lethal temperature at 32C. These results should ultimately lead to improved wheat growth models that can be used to help develop strategies for adapting to global warming, which will benefit all consumers of wheat products including wheat-fed meat production. Contact: Jeffrey.White@ars.usda.gov

Nitrogen fertilizer management for durum wheat cultivars in the Southwest.

Optimizing nitrogen (N) management and using cultivars with high N use efficiency (NUE) are important for durum wheat producers in irrigated production systems. ALARC researchers collaborated with scientists at the University of Arizona to conduct field experiments with six durum wheat cultivars and five or six levels of N treatment for two growing seasons (2010-2011 and 2011-2012) to determine NUE, and yield of durum wheat cultivars under irrigated desert conditions. Recovery efficiency of N fertilizer was very high (63 to 79%) and fertilizer rate had a positive effect on nearly all agronomic variables in both seasons. Although there was variation in grain yield and NUE among durum wheat cultivars, N fertilizer effects were more significant than cultivar effects. Results show that grower decisions on optimal N rate will have more impact than cultivar selection and that development of practical guidelines for optimizing durum N fertilizer management will benefit durum wheat growers in the southwestern U.S. contact: Kevin.Bronson@ars.usda.gov

The application of reclaimed municipal waste water containing antibiotics may lead to the development of increased antibiotic resistance in soil microorganisms receiving these waters. ALARC scientists found that soil organisms isolated from the top 30 cm of a groundwater recharge facility were resistant to the antibiotics lincomycin, penicillin, and vancomycin. However, the level of resistance in the recharge basins was similar to organisms from a recharge facility that only receives ground water for recharge. Furthermore, resistance to four antibiotics in Enterococcus was higher in the control soils that had only received groundwater soils receiving treated effluent. Comparing the development of antibiotic resistance in soil bacteria at these two sites will increase awareness of the environmental and public health impacts of using reclaimed water for groundwater recharge and irrigation of municipal areas. Contact: Clinton.Williams@ars.usda.gov

, in partnership with USDA-ARS, and multiple universities will develop ECOSTRESS, a space-based instrument that will enable study of how effectively plants utilize water. (link)

High Throughput Phenotyping at the USDA-ARS and Maricopa Agricultural Center:

USDA-ARS, Kansas State University and University of Arizona are partnering on the development of high throughput phenotyping to accelerate crop improvement. (link2)

ALARC againhosted the Summer Ag Institute. This is a group of K-12 teachers, who embark on a week-long tour throughout Arizona. This adventure is designed to teach them about food and fiber production, and help them incorporate that knowledge in the classroom curriculum. This experience is a great opportunity for the teachers to see the vital role agriculture plays in rural communities and the importance of the research being conducted at our center. The group had the opportunity to tour various labs in the three research units, as well as seeing a tractor for high-throughput phenotyping, providing the group with an overview for why we need this approach for heat and drought research and how the sensors on the tractor make it possible.

, ALARC hosted a group of students/faculty from Central Arizona College (an HSI), located in Maricopa, AZ. The group consisted of 18 students and 9 faculty members interested in learning about the agricultural research we do at the Center.

the EEO Committee observed Lesbian, Gay, Bisexual and Transgender (LGBT) month by showing a "Movie at Lunch Time." The movie included three short and fun videos, along with popcorn, soda, and candy. This was a great way for employees to take a break from their busy schedules, share thoughts, learn, and enjoy movie & popcorn.

July 2014, ALARC held its annual "Bring your Kids to Work" day. This was a great opportunity for our kids to see, touch, and feel the science that their parents are conducting. The day was filled with activities that included a Farm Field Tour, Isolating their own DNA, Robotics-Lab Automation, a Greenhouse tour, Computer/Intranet programming, Insects under the Microscope, Thermal Imaging, and Polymers to Slime. It was a wonderful day for the kids, as well as the parents (parent written consent granted for photos).

June-July, 2014, USDA-ARS, Maricopa, AZ scientists from all 3 research units hosted 13 high school intern and one teacher as part of a South Mountain Community College (SMCC) led Undergraduate Bioscience Engagement Track (UBET) program. The program aims to increase science and engineering training in local high schools, particularly for minority students. The students conducted an individual research project in their mentor's laboratory while earning college level credits. The interns developed a poster of their projects that were presented at the Center and then at SMCC for a final grade. This marks the third year that USDA-ARS has hosted interns from this program and a group of 17 students and teachers will participate in summer of 2015. Enjoy a video of the program put together by Tempe Union High School District.

July 2014,Dr. Paul Sanchez hosted and provided a tour to the Arizona Knights of Rizal. This group is a is a civic, cultural, non-political, non-profit, non-sectarian organization with the general purpose and specific objective to study and spread the ideals, teachings and the exemplary life of Dr. Jose P. Rizal, the Philippine National hero and the pride of the Malayan race.

, ALARC hosted the East Valley Chemistry Club, a group composed of home-school high school students. The club is a group of home-schooled teens studying chemistry. The club has been meeting weekly since June 2014 to interact with each other, work on lessons, and conduct chemistry experiments. Center scientists provided chemistry related activities for the students and discussed and demonstrated a number of scientific instruments used in chemistry.

, The USDA-ARS, Maricopa, AZ Seminar Series kicked-off its 8th year. The series this year focused on research being conducted by the scientific staff of the Center and included a wide diversity of topics in entomology, plant science and engineering.

ALARC and the University of Arizona, Maricopa Agricultural Center held Farm Day. This event brought in local vendors, farmers, and families throughout the community to learn about agricultural and how it affects their communities. Activities included: insect zoo, insect sounds, cotton 101, auto-guidance tractor-ride along, hayrides for the kids to the University of Arizona Farm Village & cotton gin, cricket spitting, and face painting. ALARC Scientist and Technician's put together displays on Biofuel crops, Entomology, Photosynthesis, Irrigation, Remote sensing, Natural Rubber from guayule, and Farm Equipment. A local group brought along a number of antique tractors for display and rides and Pinal County Master Gardner's were also on hand. 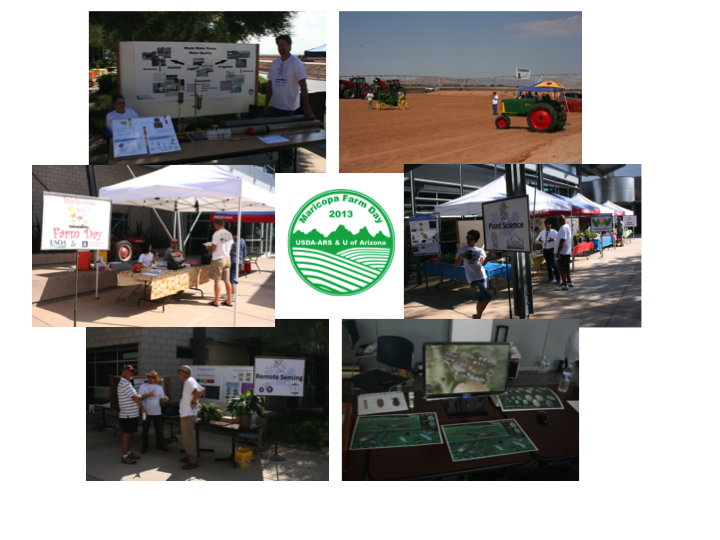 February 2015, ALARC Scientists and a Human Resource specialist represented the USDA-ARS at the annual Phoenix College USDA Career Pathways Fair located in Phoenix, AZ. The personnel visited with students and faculty to promote research activities and internship opportunities within the ARS, in general, and the Maricopa research lab, specifically. Approximately 30 people stopped by the table over a two-hour period, and pamphlets, brochures, and other promotional materials were passed out. We collected names of students interested in internships.