The Systematic Botany and Mycology Laboratory (SBML) was formed when the Mycology Laboratory was combined with portions of the Plant Exploration and Taxonomy Laboratory in 1986. In the late 1890’s mycology was closely allied with plant pathology within the USDA Bureau of Plant Industry, Plant Disease Investigations. At that time the fungus collections except the lichens from the Smithsonian Institution 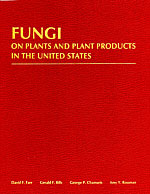 were given to the USDA to become the U.S. National Fungus Collections, now the largest collection of fungi in the world. Since then a strong mycological research program has been associated with the U.S. National Fungus Collections culminating in the comprehensive account of Fungi on Plants and Plant Products in the United States. The vascular plant systematics program reached a high point in the 1980’s but has dwindled to only two SYs at present. Starting in 1906 the U.S. National Seed Herbarium was initiated to voucher newly arriving plant germplasm. At present this herbarium includes representative seeds of most of the described plant genera.

The SBML includes four mycologists and two plant systematists. In mycology 1 SY works on the systematics of fungi used in biological control, specifically Hypocrea/Trichoderma and other hypocrealean fungi, 2 SYs work on the systematics of the chestnut blight order (Diaporthales) and their asexual relatives as well as databases and on-line identification systems, and 1 SY studies bunt fungi (Tilletia spp.). One new SY will be hired to study the molecular systematics of rust fungi. In plant systematics 1 SY is studying the genus Lotus (Fabaceae). The other plant SY serves as the nomenclature expert for the National Plant Germplasm System providing accurate scientific names of economically important plants.

Several major groups of fungi of importance to agriculture lack systematics expertise. Those fungal groups most in need of expertise include: Peronosporales and Sclerosporales or downy mildews 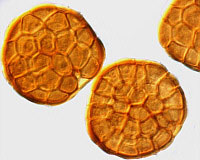 (Oomycetes), a group of obligate parasitic fungi that cause serious diseases of crop plants; fungi causing anthracnose such as Colletotrichum and other coelomycetes; Phytophthora, the genus that includes late blight of potato and sudden oak death, a new disease in the western United States; the Erysiphales or powdery mildews (Ascomycetes), a group of obligate parasitic fungi including new and invasive species such as tomato powdery mildew; and morphology of rust fungi (Uredinales) to complement the new SY working on the molecular systematics of rust fungi. In addition, there is a need for a service mycologist to determine the accurate names of plant-associated fungi. For plants, it is difficult to state where are the research gaps because the plant systematics program in ARS is very small. There is an urgent need for a single resource of information about plants that affect agriculture and natural systems in the United States such as provided in part by the 1 SY working on plant nomenclature.

SBML provides identifications and information about fungi and plants including seeds for APHIS and the scientific public. In addition to identifying specimens, information about the nomenclature, host and geographic distribution of fungi and plants is provided on-line. Most recently interactive identification systems have been developed for the biocontrol fungi Hypomyces, Hypocrea and Trichoderma as well as for the seeds of legumes to genus. The plant nomenclature scientist provides the accurate scientific of plants to the plant germplasm system and the public.

SBML including the U.S. National Fungus Collections are located on the third floor of Building 011A at the Beltsville Agricultural Research Center, Beltsville, MD.