In 1994 there was serious concern that the pink hibiscus mealybug 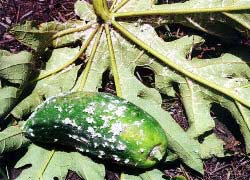 would be the next invasive species in the United States and would cause significant monetary damage to a wide range of agriculturally important plants. When a survey for the pest in Florida turned up a different, and equally devastating pest (the papaya mealybug), two scientists from the Systematic Entomology Laboratory were recruited by APHIS to implement a project to find natural enemies of the invader.

In collaboration with scientists from Belize and Mexico, 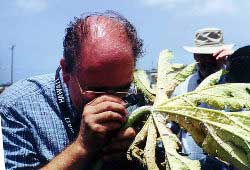 they found three wasp parasites that were reared and studied in ARS quarantine facilities and ultimately were released in Florida, Puerto Rico, and Guam. These wasps have been so successful in Florida and Puerto Rico that the papaya mealybug is rare or absent where it once was caused major damage. In Guam, three months after introduction of the parasites, their impact is evident though not complete.

In collaboration with APHIS, these SEL scientists also have been involved in successful biological control efforts that have diminished the impact of recent invasions of the pink hibiscus mealybug into Florida, California, and the Caribbean. Through the efforts of these scientists, damage that might have run into millions of dollars annually has been sporadic and minor.