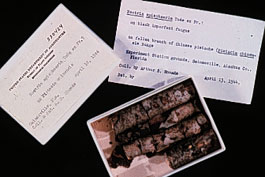 Search all the databases

Specimens in the U.S. National Fungus Collections. The U.S. National Fungus Collections (BPI) are the repository for over one million fungal specimens worldwide and are the largest such collections in the world. Information associated with these specimens constitute an enormous data resource, especially about plant-associated fungi. Data from the labels of more than 750,000 of the specimens have been entered into a database. These labels have information on the host on which the fungus was found and the locality in which the specimen was collected. Sixty percent of these specimens are from the United States and thus represent a large body of information about the fungi in this country. Data entry has been completed for the Uredinales (rusts), the Ustilaginales (smuts), the Polyporales (polypores), the Deuteromycetes (imperfect fungi), the Ascomycetes, and the C.G. Lloyd collections. Recent progress has been made in the computerization of specimens of the agarics and the "lower" fungi including the Oomycetes and Chytridiomycetes.

Fungus-Host Distributions. This database includes reports of fungi on vascular plants and plant products according to their distribution by state (for the U.S.) and country taken from over 12,000 literature sources. Currently the database contains 80,000 fungal taxa on 56,000 vascular plant hosts representing 324,000 unique host-fungus combinations. Over 300 countries and territories are included. Records are continuously added as new publications are received. This database was used to produce the book Fungi on Plants and Plant Products in the United States (APS Press, St. Paul, Minnesota, 1989).

Literature. An outstanding database more than 40,000 references on the systematics of plant pathogenic fungi is available. The worldwide literature received at the SMML is reviewed for important references on world distribution, taxonomy, and biology of plant pathogenic fungi and bacteria. Keywords for each piece of literature are derived primarily from fungus and host scientific names and country. Data in this database were used to produce the book Literature Guide for the Identification of Plant Pathogenic Fungi (APS Press, St. Paul, Minnesota, 1987).

Nomenclature. This database contains information on the accepted names and synonyms for approximately 40,000 fungal names. Additional information on general distribution and useful literature is also included. The database includes the nomenclatural information published in Farr et al., Fungi on Plants and Plant Products in the United States (APS Press, St. Paul, Minnesota, 1989) in its entirety. After 1989, data was added irregularly and the nomenclature was reviewed for selected plant hosts. The date of verification, if present, indicates that the nomenclature record has been updated. Records lacking dates of verification reflect older literature sources (probably pre-1989) and should be interpreted with caution. [More details about nomenclature records in the database]

Search all the databases