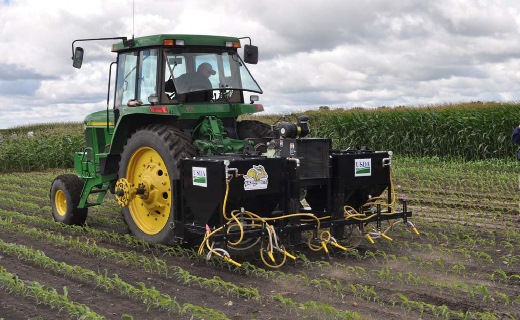 Air-Propelled Abrasive Grit Management (PAGMan) is being developed for selective, postemergence, in-row weed control in corn, soybean, and other crops that are grown in widely-spaced rows. PAGMan allows organic growers to control small weeds in row crops without seriously affecting the crop. It lessens the dependence on soil cultivation for in-row weed control. Weeds between the crop rows can be managed by other methods, such as inter-row cultivation, flaming, or mowing.

PAGMan can use many types of commonly available grit. Several grits are associated with agriculture, such corn cob grit, walnut shell grit, and so forth. Additionally, gritty-textured organic fertilizers also can be employed as grits. These include alfalfa meal, corn gluten meal, crushed limestone, seed meals, and many others. All work equally well to control small weed seedlings.

PAGMan entrains these grits into an airstream pressurized at about 100 psi (700 kPa). When aimed at the bases of crop plants growing in rows, the grits kill weed seedlings through abrasion. Three abrasion events, at times comparable to the 1-leaf, 3-leaf, and 5-leaf stages of corn, provide season-long weed control of common annual weeds such as lambsquarters, pigweed, and foxtail (Chenopodium album, Amaranthus retroflexus, and Setaria viridis), which maintains yields comparable to those in weed-free crops.