The long-term goal of research conducted in the Small Grains Insect Resistance Laboratory is to identify, characterize and utilize genetic mechanisms that confer durable insect resistance to crop plants. The current focus of the laboratory is to use genetics and molecular biology techniques to address the issue of wheat/Hessian fly interactions. This lab, which was established in 1995, is located within the Crop Production and Pest Control Research Unit of the Agricultural Research Service on the Purdue University Campus, Department of Entomology, West Lafayette, Indiana.

For the past forty years, the Hessian fly, a major insect pest of wheat world wide, has been controlled by the widespread use of resistant wheat cultivars. This type of host-plant resistance is achieved by identifying resistance genes in common wheat, its wild species relatives, durum wheat (pasta wheat) or rye and incorporating these resistance genes into new cultivated varieties through classical plant breeding. However, within 8-10 years of the release of a new wheat cultivar, the Hessian fly is able to overcome the resistance gene and can survive on cultivars that were formerly resistant. Thus, we must constantly continue our search for new sources of resistance genes to replace ones that are no longer effective. Since it takes roughly 8-10 years to identify a new source of resistance and incorporate it into a cultivar, the wheat crop is constantly under threat.

USDA-ARS scientists, in conjunction with scientists at Purdue, are devising deployment strategies that will lead to more durable resistance. This collaboration integrates entomologists, who identify new sources of resistance and determine which genes will be effective in various parts of the U.S., molecular biologists and geneticists, who determine the chromosomal locations of genes and their mechanisms of resistance, and plant breeders, who incorporate the genes into new resistant wheat varieties.

Goal 1) Identification of DNA markers that are coinherited with individual resistance genes. The presence of multiple markers in a single plant will indicate that multiple resistance genes are also present.

Goal 2) Determination of the chromosomal locations of resistance genes. If multiple genes are to be pyramided, it is essential to verify that genes from different sources are not actually the same gene.

The molecular cloning of genes conferring resistance to the Hessian fly will allow direct transfer of resistance to previously developed wheat cultivars. In addition, information gained from molecular analysis of these genes will deepen our understanding of their modes of action and will lead to new strategies for insect resistance in wheat as well as other crop plants. However, wheat is a difficult plant in which to undertake targeted gene cloning projects, due to its large genome resulting from hexaploidy and a high fraction of repetitive DNA. Rice, on the other hand, has a small diploid genome containing little repetitive DNA and subgenomic segments in which the gene order is similar to that of wheat. Molecular studies that compare wheat segments containing Hessian fly resistance genes to evolutionarily related rice segments will lead to new cloning strategies. The goals of this project are to generate information that will facilitate targeted cloning in plants with large genomes.

Goal 2) Identify many markers within rice segment to serve as first step for targeted cloning in wheat. 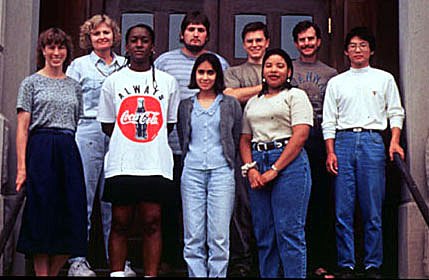 The P.I.'s publications from March 1995 through the present are listed. The P.I.'s previous work was on rice.