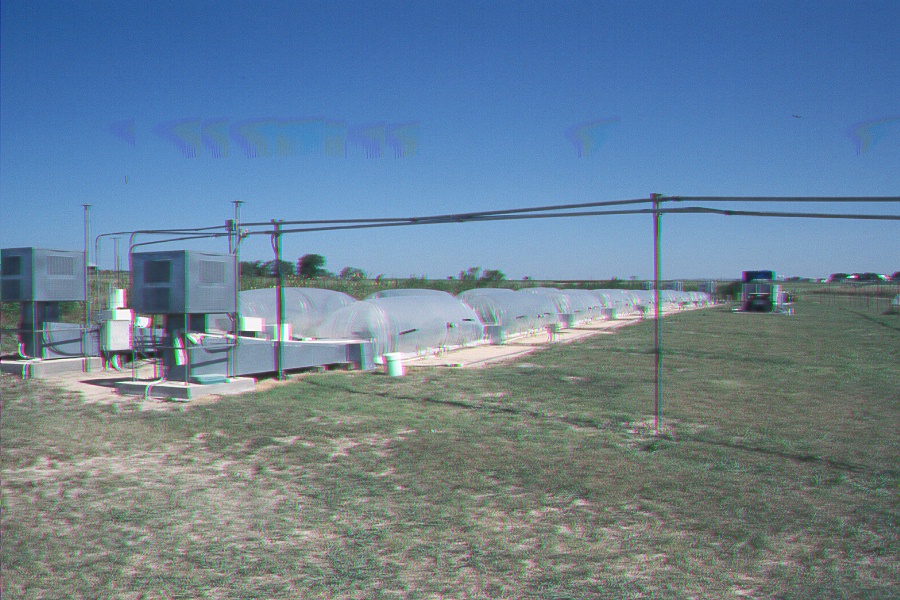 The Prairie CO2 Gradient: Research with a View to the Past and Vision of the Future

The Prairie CO2 Gradient (PCG) is a unique controlled environment facility for exposing a portion of intact rangeland to a continuous gradient in atmospheric carbon dioxide (CO2) concentration. The PCG provides for a uniform daytime gradient in CO2 concentration from near the Ice Age (c.18,000 years BP) level of 200 ppm (parts per million) to the current 360 ppm and from the current concentration to one predicted during the next century (550 ppm). The PCG is modeled after a prototype that has been operated for almost 10 years in a glasshouse at Temple,Texas, and is comprised of two tunnel-shaped chambers aligned parallel to each other along a north to south axis.

The two chambers in the PCG each are 1 m wide and tall, and are composed of ten 5-m long compartments containing undisturbed soil and vegetation. During daylight, photosynthesis of enclosed vegetation depletes the CO2 concentration of air as it is moved unidirectionally through each chamber. The desired CO2 gradient is maintained by automatically adjusting the rate of air flow through each chamber to changes in net CO2 uptake by vegetation. Pure CO2 is added during daylight to air introduced to one chamber (superambient chamber) to elevate the initial CO2 concentration to 550 ppm. A continuous gradient in CO2 concentration from 550 to 360 ppm is maintained. Ambient air is introduced during daylight to the other chamber (subambient chamber)to initiate a subambient CO2 gradient from 360 ppm to 200 ppm. The direction of air flow in each chamber is reversed at night and the CO2 of air input to the superambient chamber is elevated. Air flow rates are regulated to maintain night-time CO2 concentrations at 150 ppm above daytime values along each chamber.

Each of the 20, 5-m lengths in the PCG is separated by ducts with chilled-water cooling coils that are used to automatically reset air temperature and humidity to values measured outside chambers. Soil in each of the 20 lengths with undisturbed vegetation is isolated to a depth of 90 cm from surrounding soil with a rubber-coated fabric 3 mm in thickness. Air dry bulb and dew point temperatures and atmospheric CO2 concentration are measured regularly at extremes of each 5-m length. Water is added through a surface irrigation system to match precipitation.

The PCG was constructed on a rangeland dominated by C3 annuals in spring and the decumbent C4 perennial grass Bothriochloa ischaemum (KR bluestem) and taller C3 annual forb Amphiacharis dracunculoides (annual broomweed) during summer. Other warm-season C3 forbs occur at relatively low densities. The long-term annual precipitation of 825 mm is well distributed over the year, but often is insufficient to support growth from July through September.

Carbon dioxide treatments were initiated with the PCG in April 1997 to test two central hypotheses.

1. Increasing atmospheric CO2 from near glacial through present to possible future concentra- tions will enhance net primary production and thereby contribute to an increase in short- to medium-term (years) carbon (C) sequestration in soil. Carbon accumulation rates will be monitored directly and continuously as net CO2 fluxes between the atmosphere and the vegetation and soils in each of the 20, 5-m lengths along the PCG, and will be integrated over daily to annual scales to quantify effects of CO2 on ecosystem C balance. Measurements of aboveground and belowground biomass and soil C content will serve as a compliment to the CO2 flux data.

2. Increasing atmospheric CO2 concentration will reduce evapotranspiration and increase average levels of soil water, particularly during the usually dry summer. These changes will contribute to an increase in production and, possibly, to an increase in abundance of species that previously were limited by low water availability. Evapotranspiration from rangeland in 5-m lengths of each chamber will be calculated from regular measurements of air dry bulb and dew point temperatures at extremes of each length. We will regularly measure xylem pressure potential on selected species, volumetric soil water content, and species composition across the CO2 gradient.