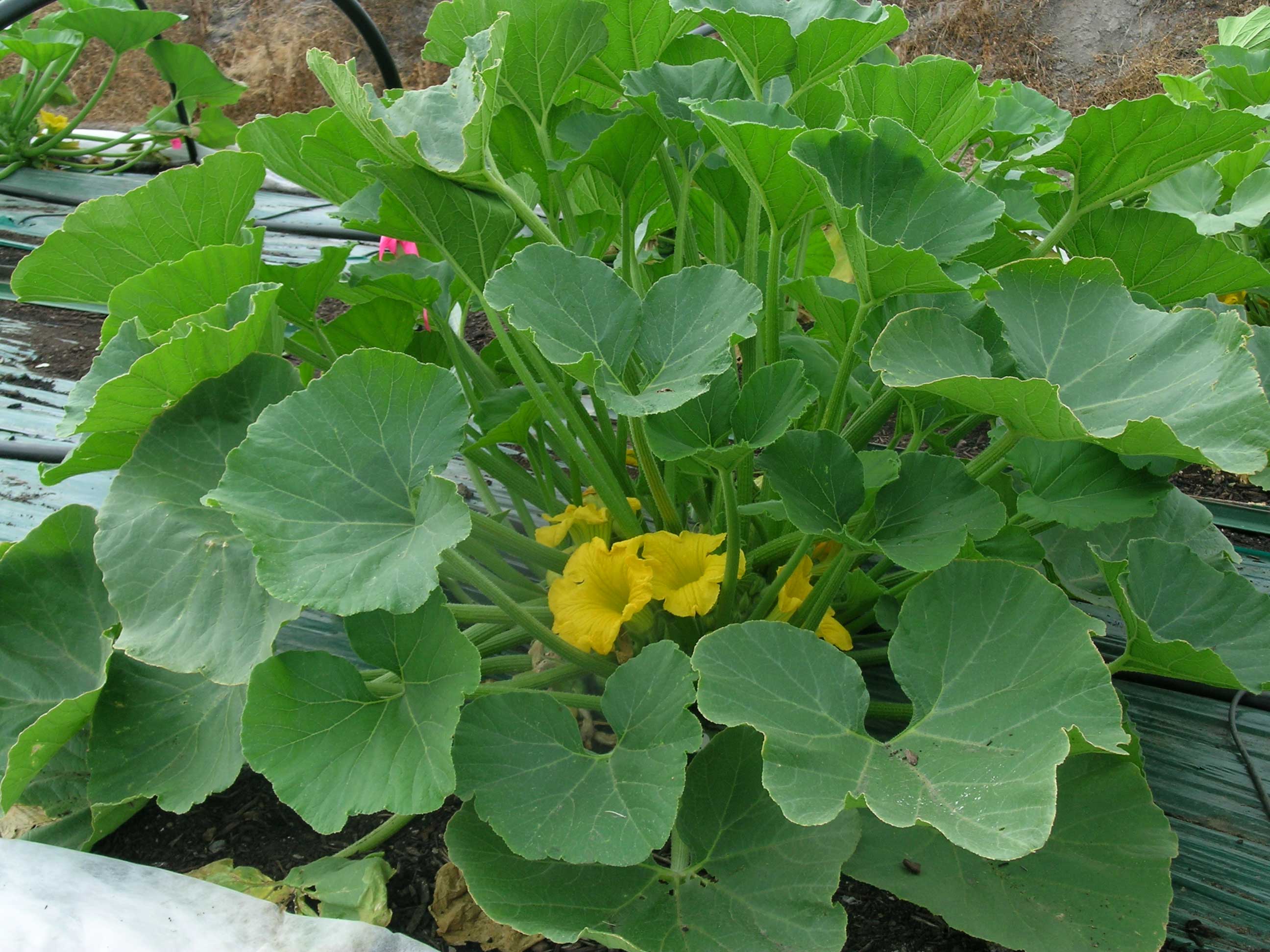 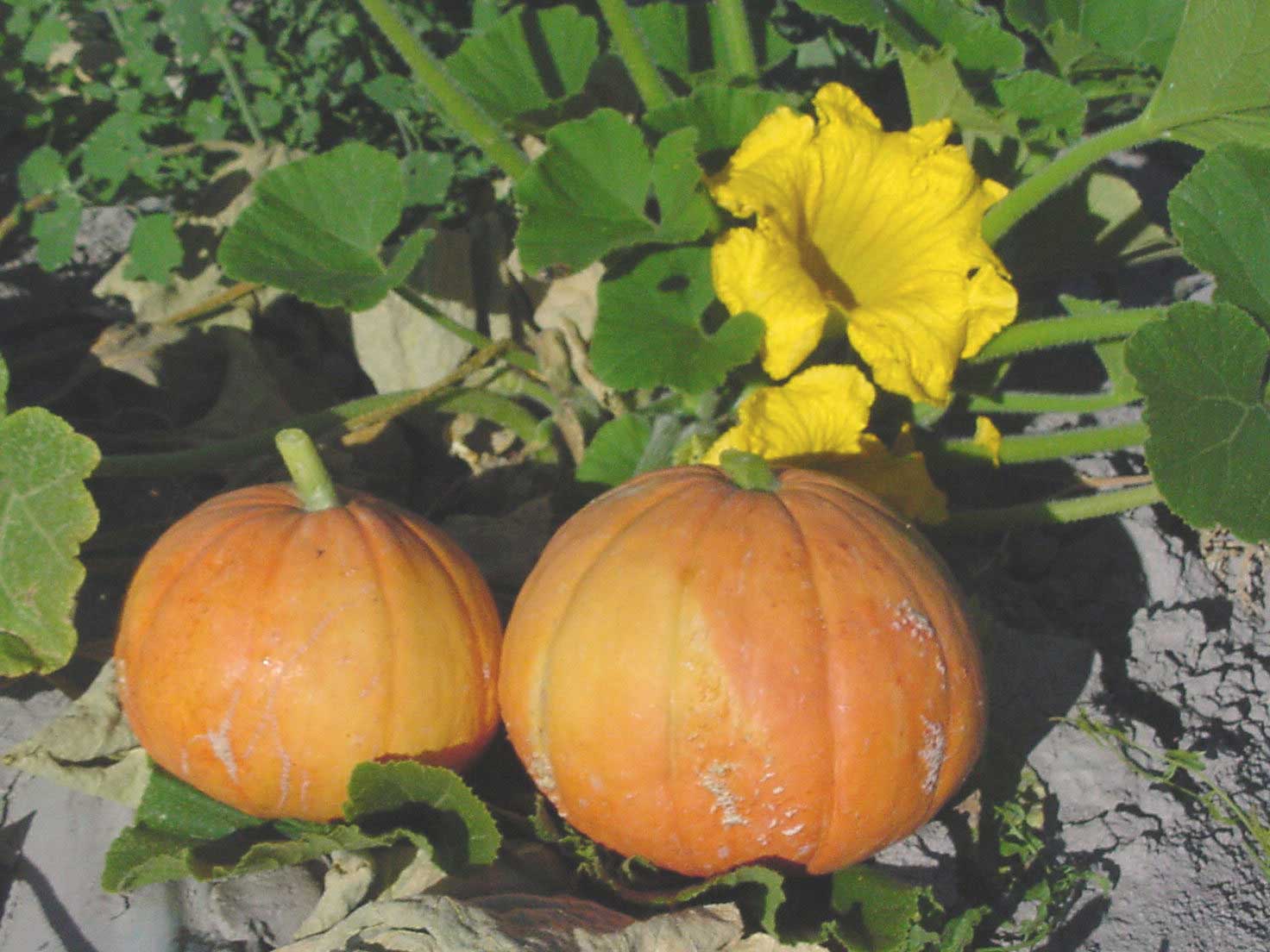 The squashes (including pumpkins and gourds) are a crop native to the Americas that require a pollinator.  Squashes are big business, a half billion dollar crop in the USA alone, and that does not count the huge quantities grown in home gardens. Squash flowers are unisexual, and so require a bee to move pollen from male to female flowers.  Honeybees are typically provided for commercial squash pollination, but native specialist bees of two genera - Peponapis and Xenoglossa, the so-called "squash bees" - are very common, often the dominant pollinators of many wild New WorldCucurbita (the genus that includes squashes and gourds).  Where squash cultivation has extended beyond the ranges of wild plants, representative species of squash bees have followed (in North America, anywhere outside the Southwest; in South America, areas of southern Brazil).  Squash bees are non-social, but occasionally gregarious (they like to nest together), ground-nesters, and all species are strict specialists for Cucurbita pollen.  They forage early in the morning, beginning before honey bees are active, and have been shown to be excellent pollinators of several kinds of both winter and summer squashes.  If numerous, they thoroughly pollinate all available flowers, rendering flower visits of later-flying honey bees superfluous for pollination.  Before honey bees were introduced to the Americas by European colonists, it seems evident that squash bees were critical to the adoption, domestication, spread and production of Cucurbita by native peoples throughout the Americas. 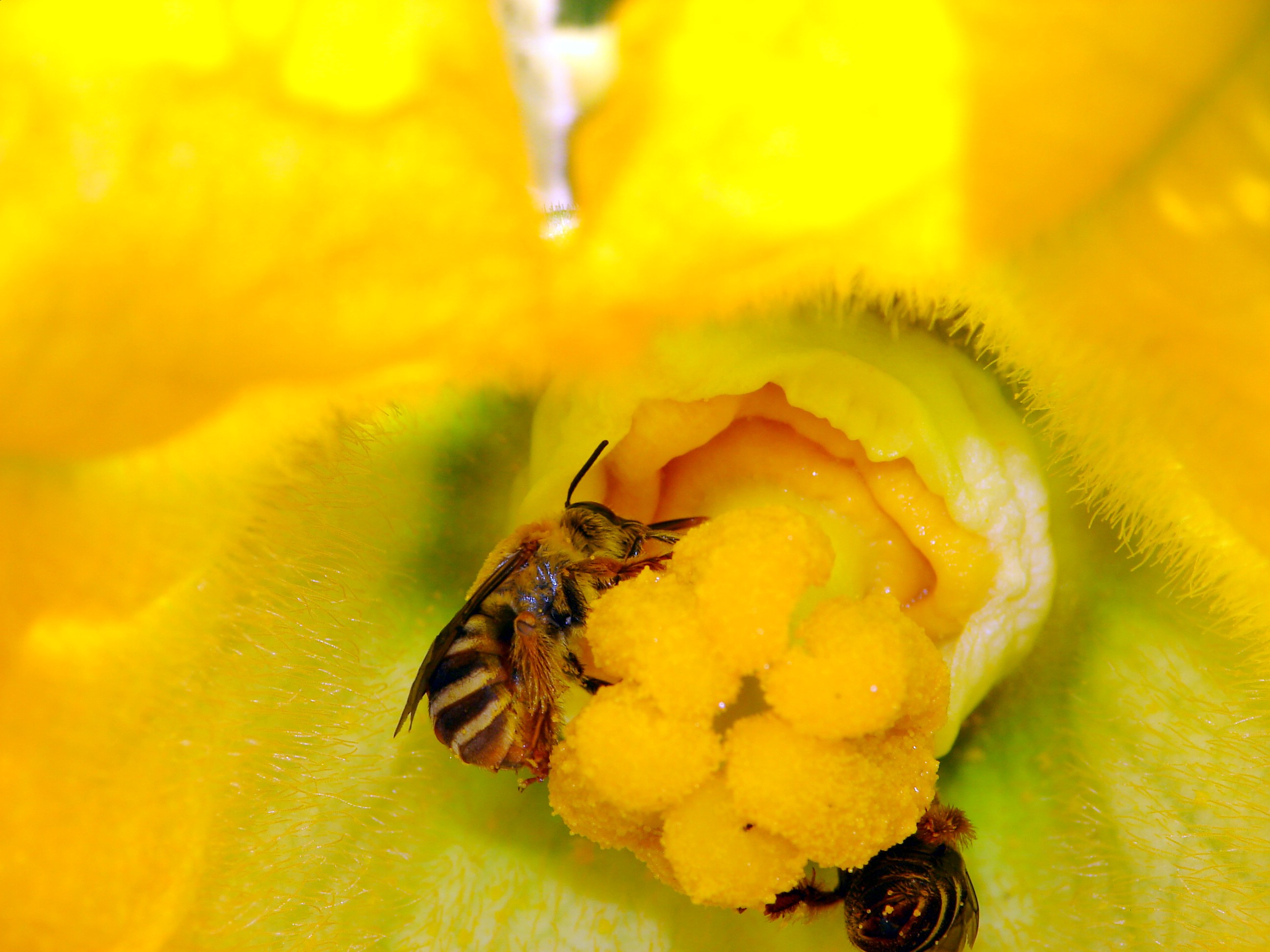 Today, we know from intensive sampling efforts plus museum label data that squash bees are found throughout most of the US and SE Canada, southward through Mexico to near Buenos Aires, Argentina, Uruguay and thence across through S Brazil. Peponapis are proving to be abundant and effective, a first case for unmanaged, native non-social bees playing a key role for production of an agricultural crop at the continental scale.  As a practical matter, their recognition and stewardship by farmers and gardeners will translate directly into production and sales, while in many cases diminishing the need to rent honey bee colonies. 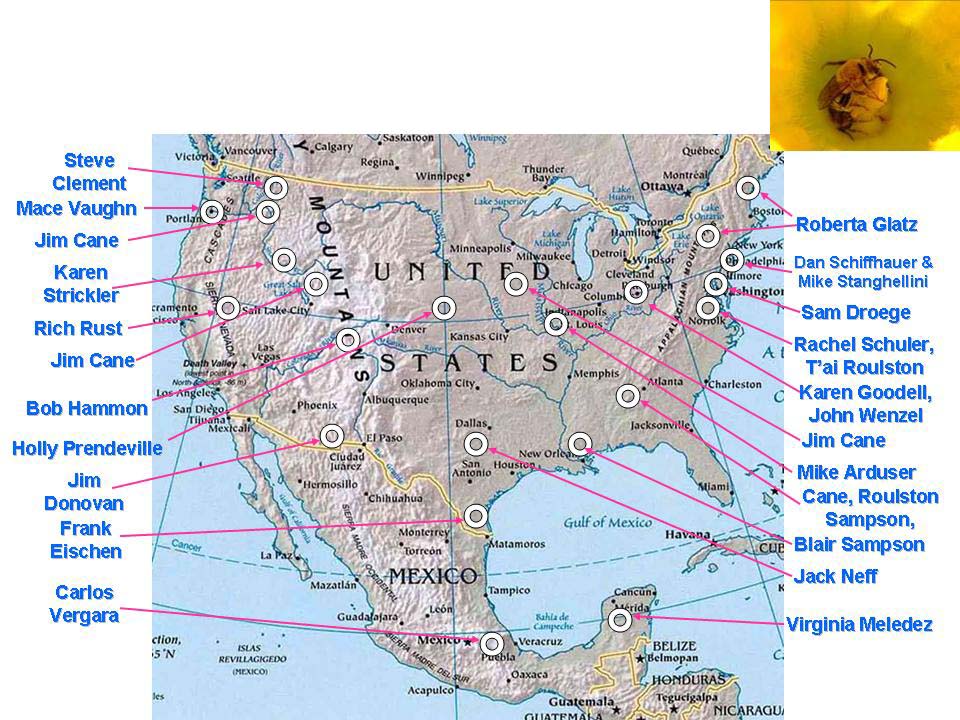 Researchers involved in the U.S. and Mexico survey 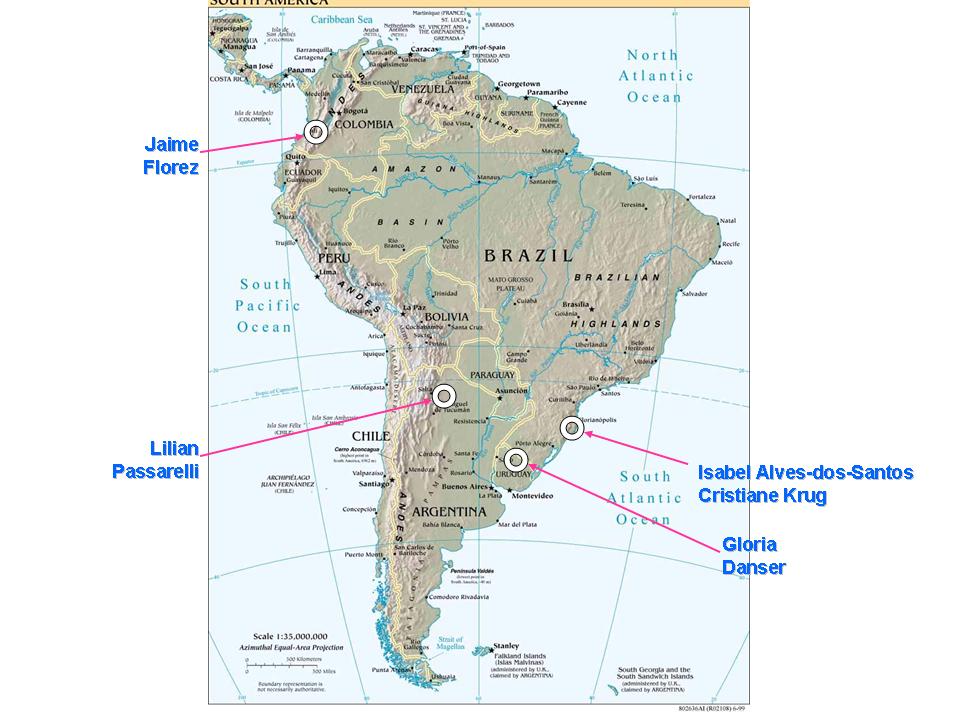 It is clearly impractical impossible for any one investigator to locate and concurrently survey for bees across a series of cultivated squash fields and gardens across any country. Therefore, to achieve this necessary objective, the Squash Pollinators of the Americas Survey (SPAS) was conceived and first implemented in January 2004 by Jim Cane at the USDA-ARS Pollinating Insect Research Unit at UtahStateUniversity in Logan, Utah.  SPAS consists of a growing network of volunteer collaborators, mostly pollination ecologists or bee biologists, drawn from universities and federal agencies all the way from Guelph, Ontario, Canada to Buenos Aires, Argentina and three states in southern Brazil.  A systematic, unbiased protocol was designed to survey squash bees and other bees at a recorded count of squash flowers and plants.  The protocol was then tested, evaluated and refined by 16 founding members at 55 sites during 2004, mostly by collaborators in the USA.  Also recorded are hour and date of the census, species of squash, field size, years in production, organic or not, surrounding habitat, as these variables may be responsible for differences in counts.  Communication between participants is facilitated by a listserv and a bilingual master spreadsheet for data entry, compilation, and distribution of data back to participants.  These features will continue to be refined as insights are gained.  Rather than the traditional model of a principal investigator directing subordinate contributors, SPAS has fostered inquiry and decentralized leadership from among the participants, who are encouraged to band together in various combinations to tackle regional, conceptual or practical components of the overall program.

Data from 21 states, 6 countries and 20 collaborators indicate that one or more species of Peponapis are abundant if not dominant at flowers of cultivated Cucurbita at most locations, exceptions being the US Pacific Northwest and the Amazon Basin.  Population densities do not seem to diminish with larger patch size.  For instance, one 150 acre field of kabocha squash hosted one Peponapis bee at every five flowers.  Locations with a history of Cucurbita cultivation are typically hosting abundant Peponapis. Some conventional farms that use pesticides judiciously in the crop or the surround area are nonetheless served by abundant Peponapis at their Cucurbita flowers.  This unexpected result may reflect attributes of this particular system that are forgiving of insecticide use so long as insecticides are not systemic, and they are applied as liquids at dusk or night and dry by morning.

Additional collaborators are welcomed for the survey, especially in the western US and from other countries, as large regions and half the states remain entirely unsampled, and many more are under-sampled. The 10-min surveys hinge on the reliable and consistent contribution of its participants.  If you would like to contribute surveys, contact Jim Cane for instructions. It is becoming clear that an unmanaged group of non-social native bees - the specialist squash bees - are responsible for much of the production of cultivated squashes and pumpkins across much of the Western Hemisphere.