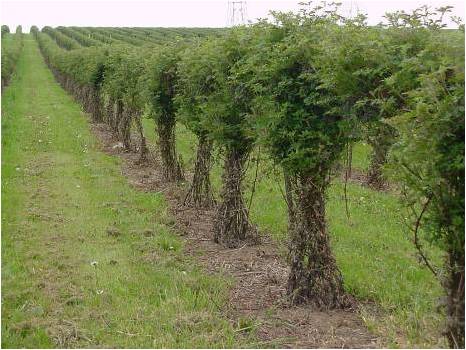 Raspberries, blackberries, dewberries, cloudberries, and their kin belong to the genus Rubus of the rose family (Rosaceae).

Some varieties will form fruits without floral visitation, but in all cases, fully sized fruits only result from floral pollination by bees.

Raspberries and to a lesser extent blackberries are attractive to diverse bees, as their abundant pollen and nectar is readily accessible at the open flowers.

Fruits of raspberries and blackberries are compound drupes composed of small turgid drupelets, each of which contains 1-2 seeds.  Wild species vary with regard to self-incompatibility, but flowers of domestic species and their hybrids are hermaphroditic, self-fertile and to a degree self-pollinating.  Some, like the red raspberry, possess pseudogamous apomicty, meaning that fertile seeds form without fertilization, but to form the fleshy tissue surrounding the seed, fusion with male gametes is required.  Each flower consists of ring of stamens centered around a central brush of pistils setting atop a receptacle.  Stigmas of outer pistils can contact the ring of anthers by themselves, but inner ones do not reach the distance.  Fruits from unvisited flowers thus consist of a ring of plump drupelets surrounding a central pithy tip of leathery undeveloped drupelets.  Such fruits weigh 1/3 less and are unsuitable for fresh market sales.

Fully formed fruits result from bee pollination of flowers.  Flowers of many cultivars provide generous rewards of pale gray or tan, protein-rich pollen and accessible, often copious quantities of nectar.  Superior pollinators will atop the central column of pistils as they forage, assuring that the stigmas of these inner pistils receive pollen.  Poor pollinators will stand on the petals instead, circling the flower for nectar and failing to contact the innermost pistils.

Honeybees can be satisfactory pollinators where weather during bloom is warm and conducive to flight.

At the Bee Lab, Dr. Jim Cane is studying a promising species of West Coast Osmia that avidly visits all flowering raspberries and all varieties of blackberries, consistently making stigmatic contact on every visit.

It is proving to be manageable in foam nesting boards used for alfalfa leafcutting bees.