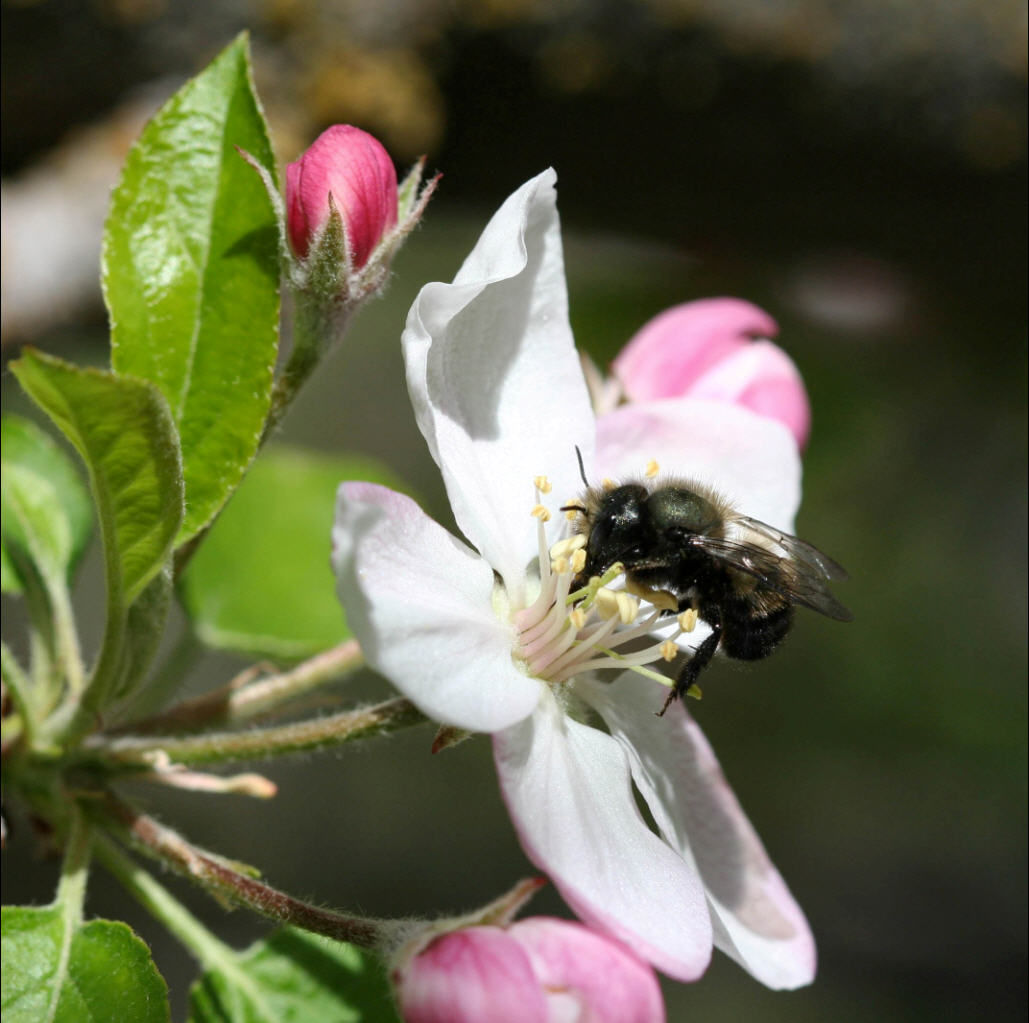 In recent years, the blue orchard bee (BOB) has become established as an alternative orchard pollinator in North America. With a strong preference for fruit trees, BOBs are highly efficient pollinators; in fact, just 250-300 females will pollinate an entire acre of apples or cherries.  BOBs forage and pollinate under cloudy skies and at lower temperatures than most other bees.  They are easy to manage and rarely sting. 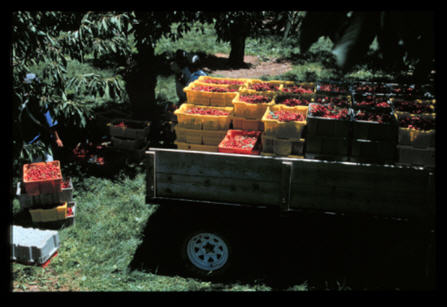 Cherries being harvested from an orchard pollinated by blue orchard bees.

The blue orchard bee (BOB), Osmia lignaria, is increasingly sought by people who are commercially trap-nesting wild bees in the western USA.  Dozens of other native bees, including other Osmia species, may be inadvertently obtained, particularly if the nest tubes are left out during the summer.  Timely pick-up by late spring will avoid many of these unwanted species, especially prevalent summer bees such as Megachile.

When recovering blocks/reeds/tubes from the field, initially all one sees are the end caps of the nests, which for some species may be recessed.  With practice and a hand lens, the probable identity of the nest can be learned from the nature of the cap itself, or certainly what the occupant is not, based on the material(s) constituting the cap and its surface texture.  Most species of cavity-nesting Osmia make closures from leaf pulp (mastic), including the earliest spring nester, Osmia ribifloris  .

It is ultimately important to sort by-catch from BOB, both for quality control and also to avoid shipping other species out of their native ranges   The by-catch should be returned to the wild, but several hundred yards from where nest blocks will be placed the following year.

Below is a visual guide to some of the common or more recognizable nest caps one is likely to encounter when trap-nesting BOBs, particularly in northern Utah. 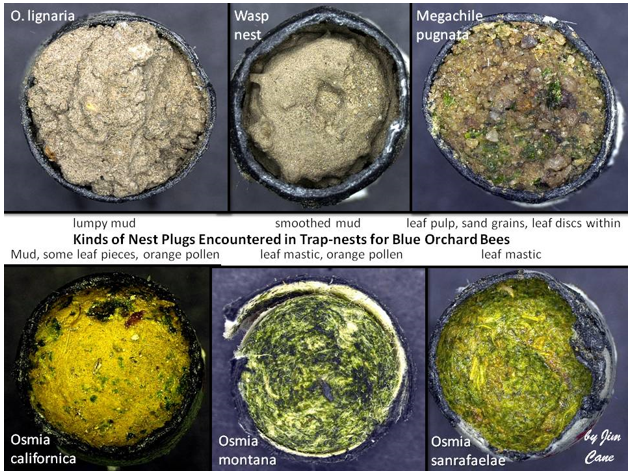 A printable PDF version of this Nest Plug information is available.

These bees do have their own pests and diseases, however, nest materials and management techniques are available to deter or remove many of these from the bees nesting in an orchard.

Examples of pests include:

The adult checkered flower beetle (Trichodes ornatus) is very colorful, and females lay their eggs in bee nests.  The larvae prey on the developing bee brood, and eat the pollen provisions.  The larvae have a somewhat worm-like appearance and a red color. 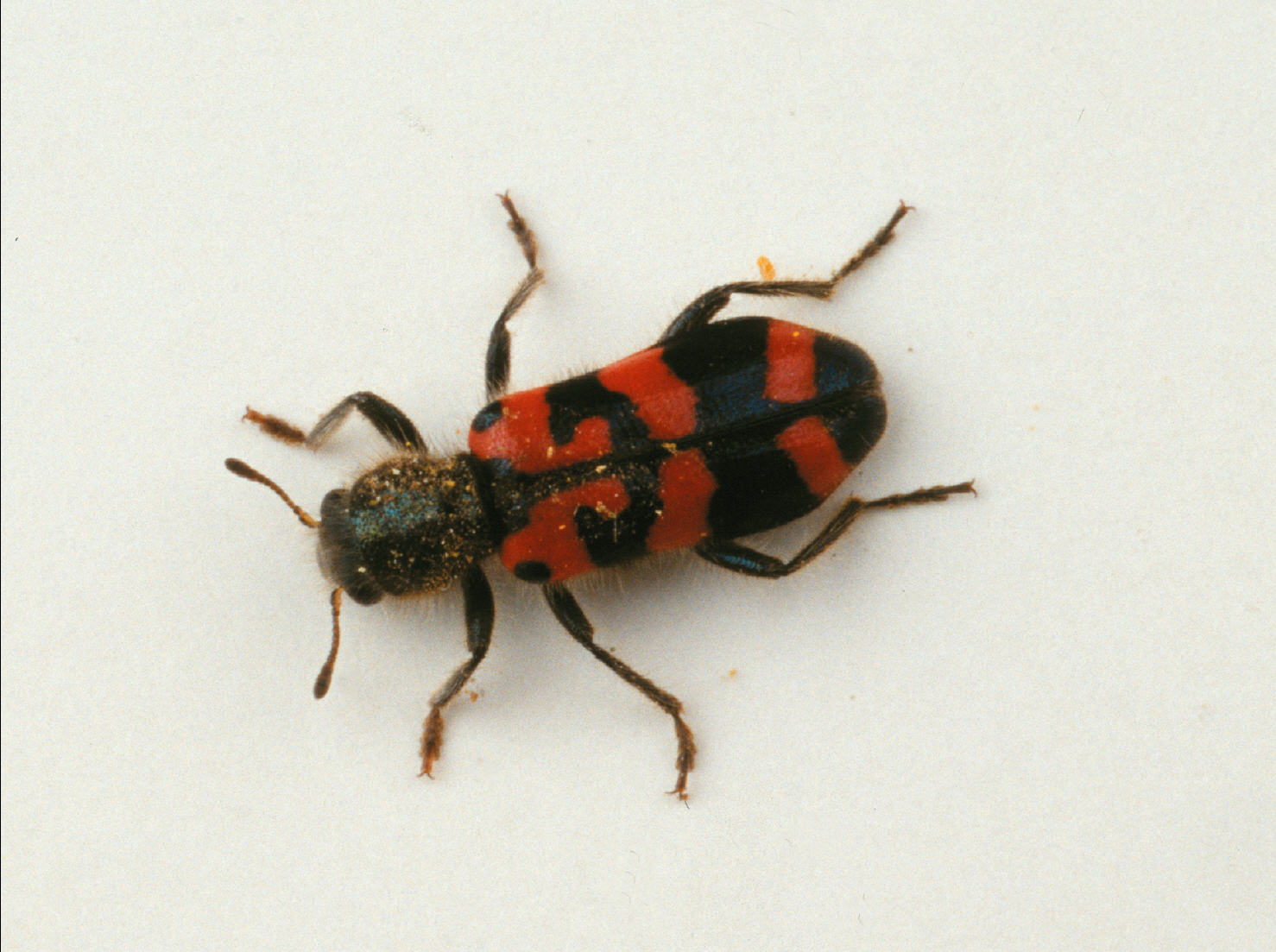 Blister beetles (Tricrania stansburyi) lay their eggs in flowers, and when the eggs hatch, the new larvae wait for a bee to come and visit, then hop a ride to the bee's nest.  In this way, the beetle larvae finds its way into a sealed nest cell, where it kills the bee egg and feeds on the pollen provision.  Only one blister beetle develops in one bee cell. 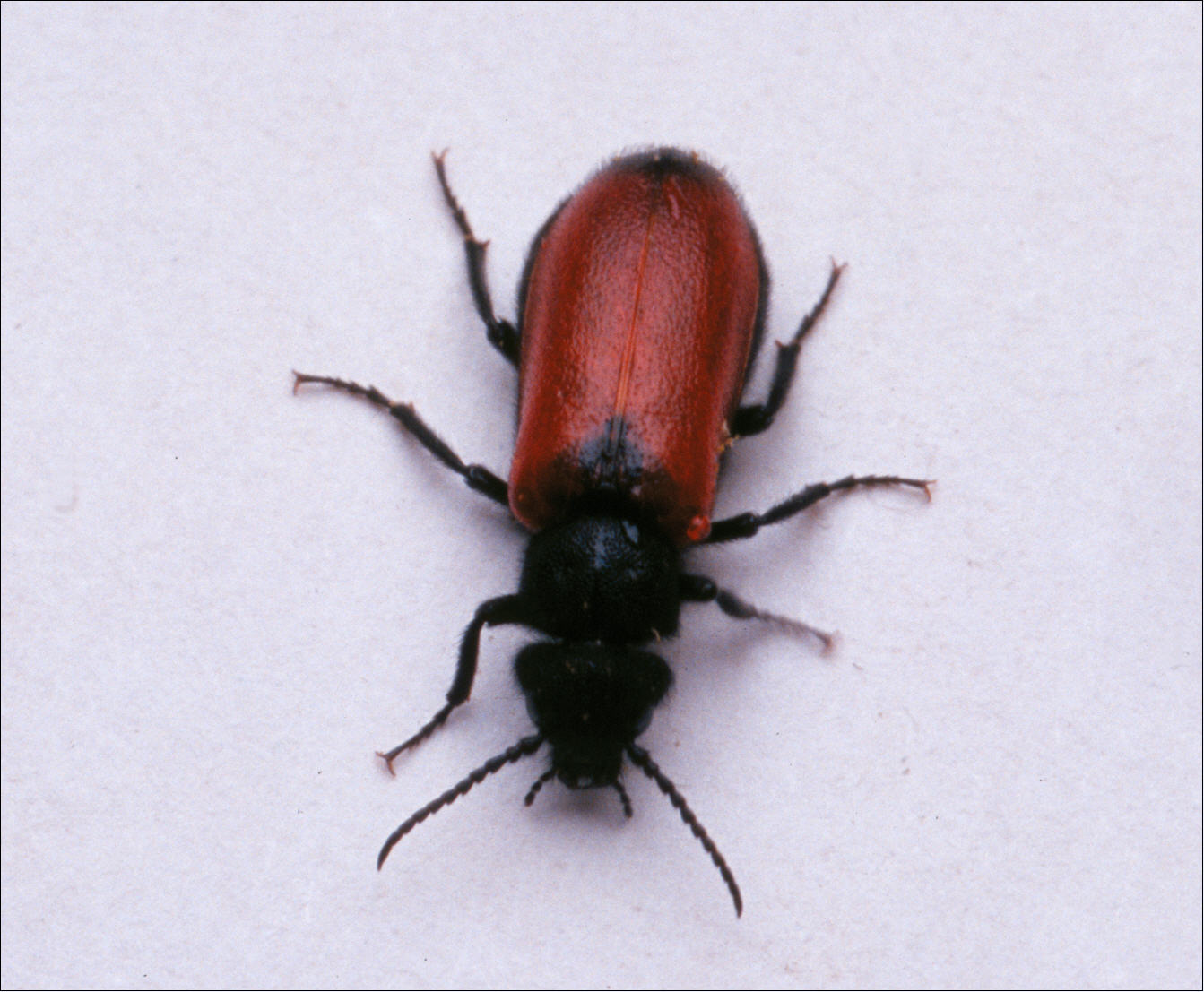 Flour beetles (Tribolium spp.) lay their eggs in the nests, and the larvae feed on the pollen provisions.  They typically do not harm the bees directly. 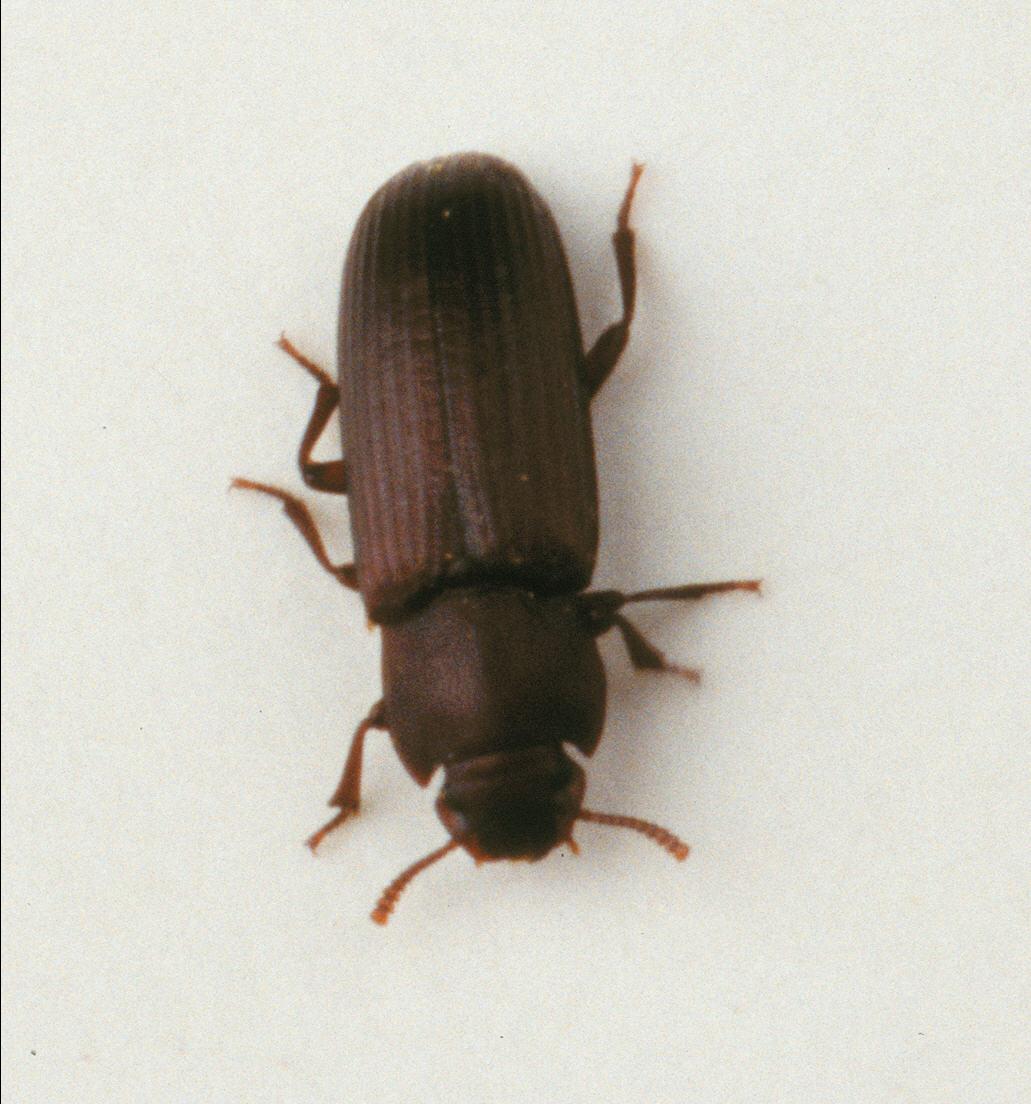 Carpet beetles, such as this larva, commonly scavenge in bee nests.  Carpet beetles belong to the Family Dermestidae. 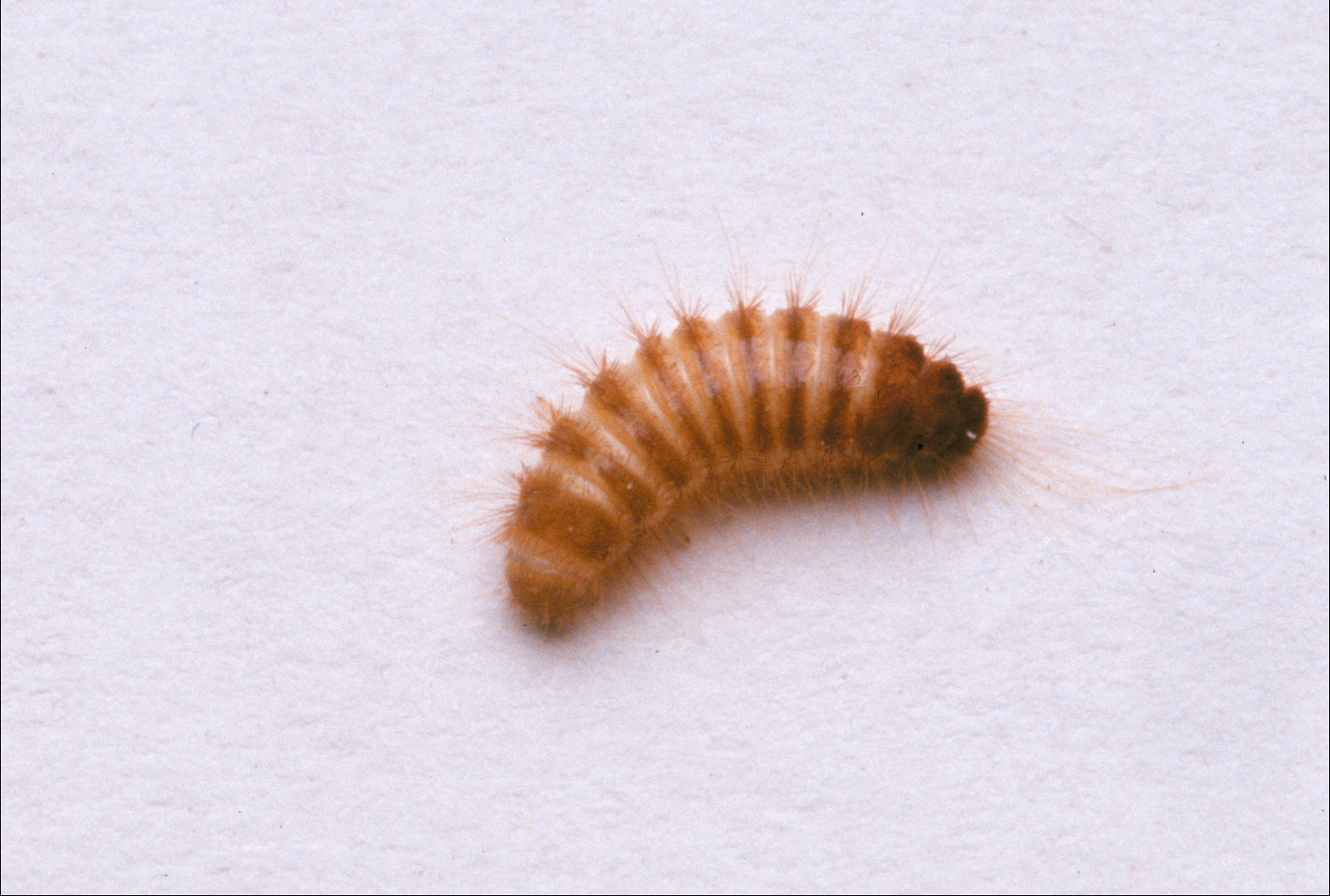 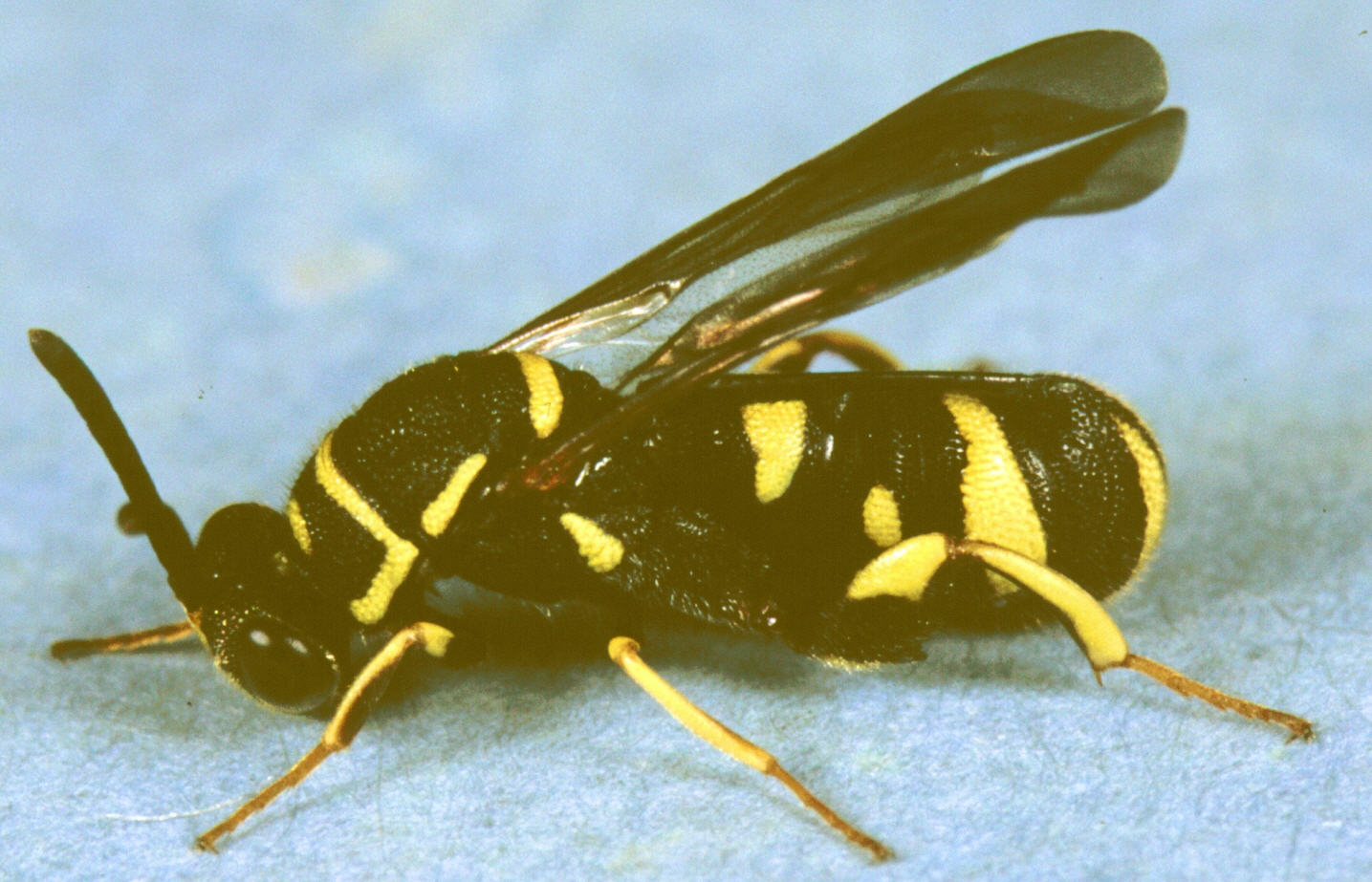 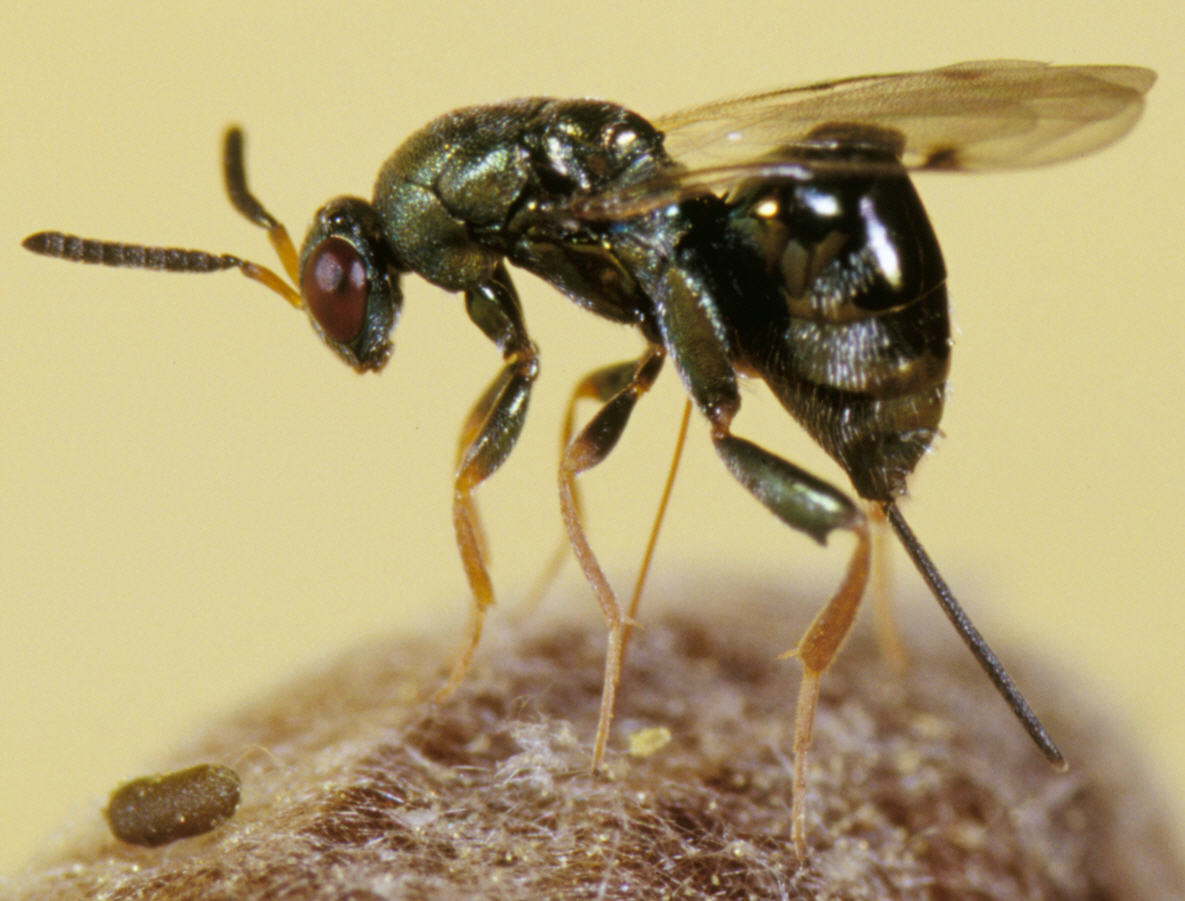 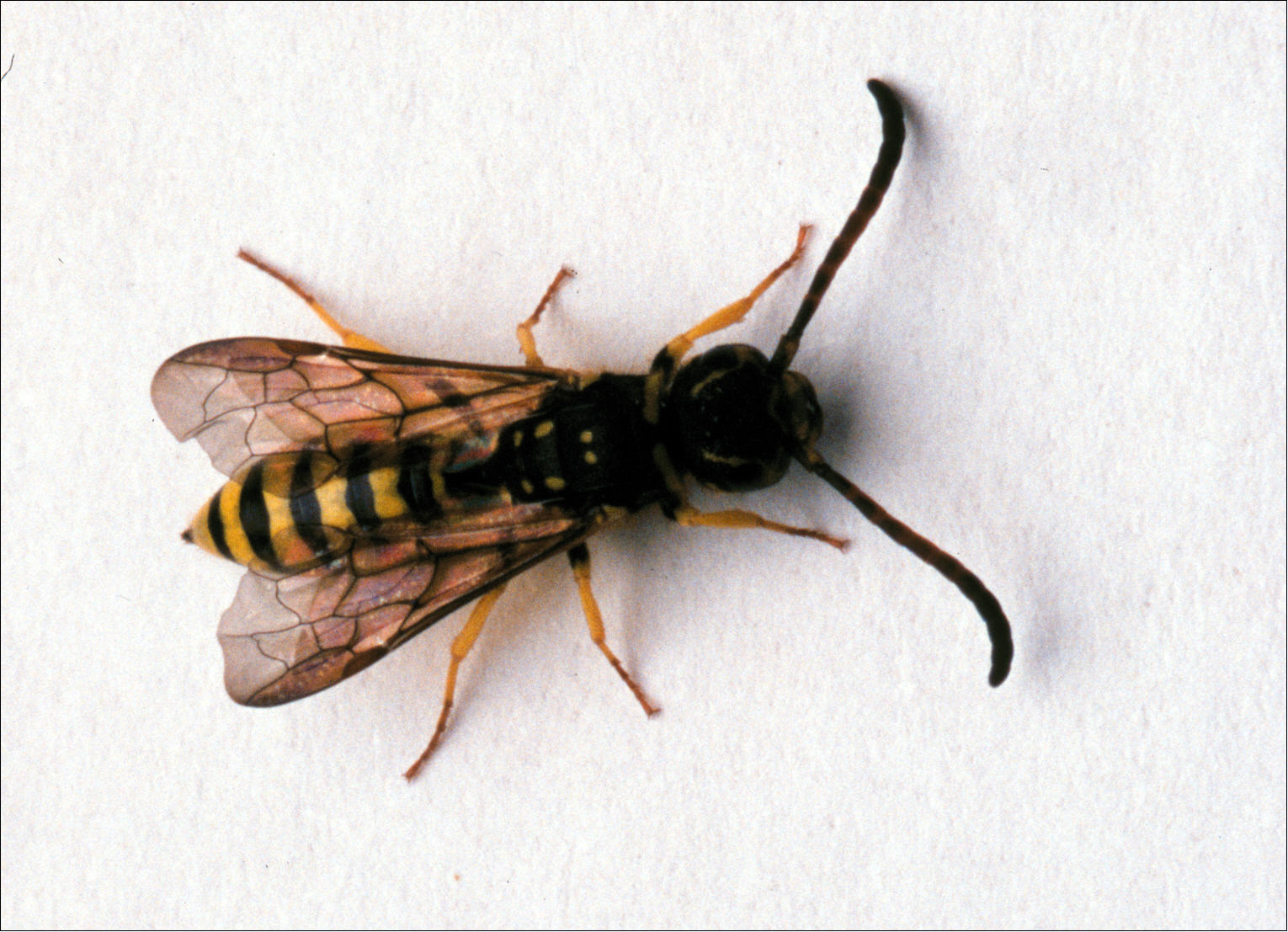 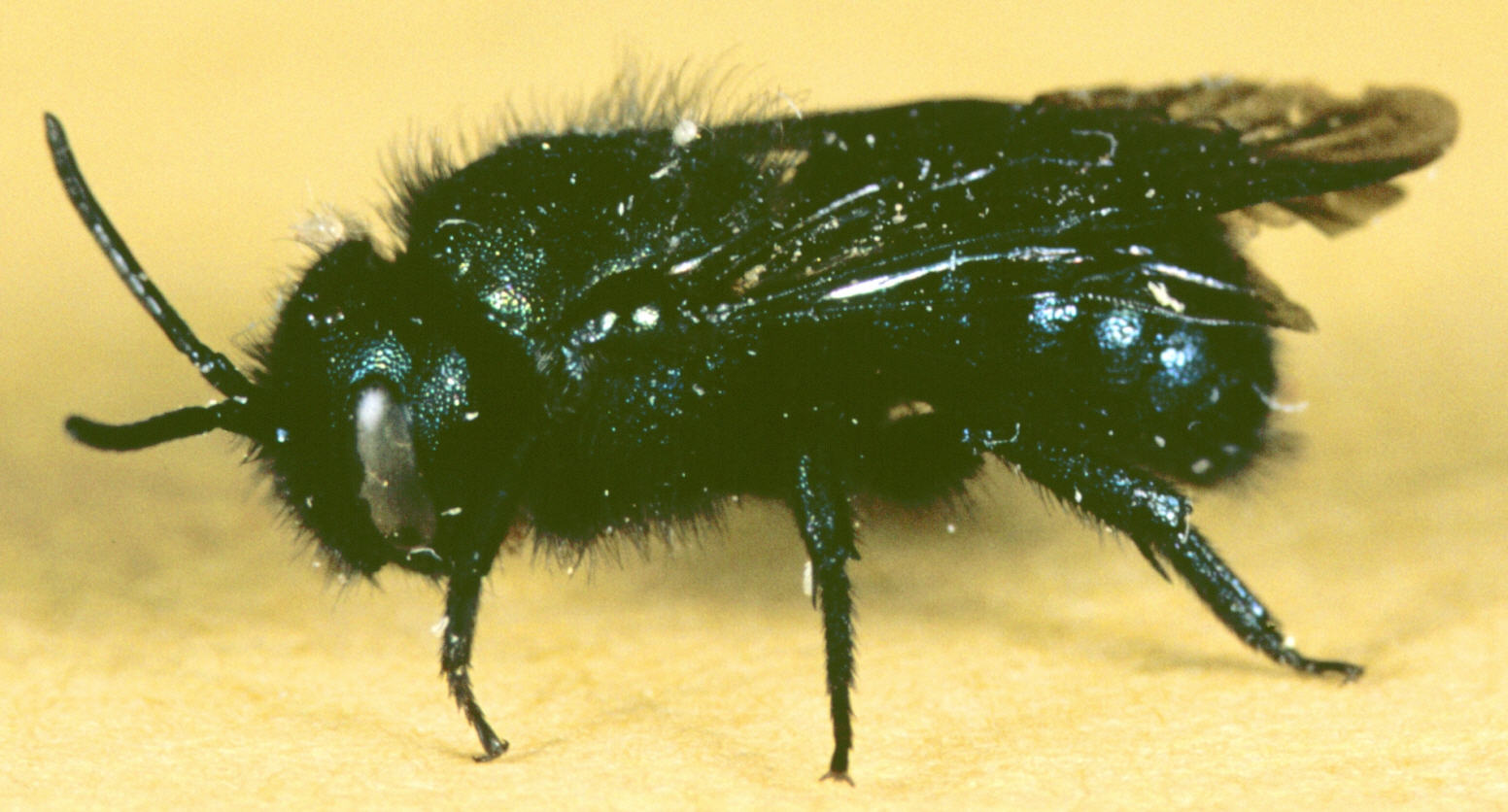 Stelis is a bee that is a cleptoparasite.  It is also called the cuckoo bee.  Its looks are similar to the blue orchard bee, but it is smaller, and the fecal pellets are long and curly, allowing one to identify it in the nest. 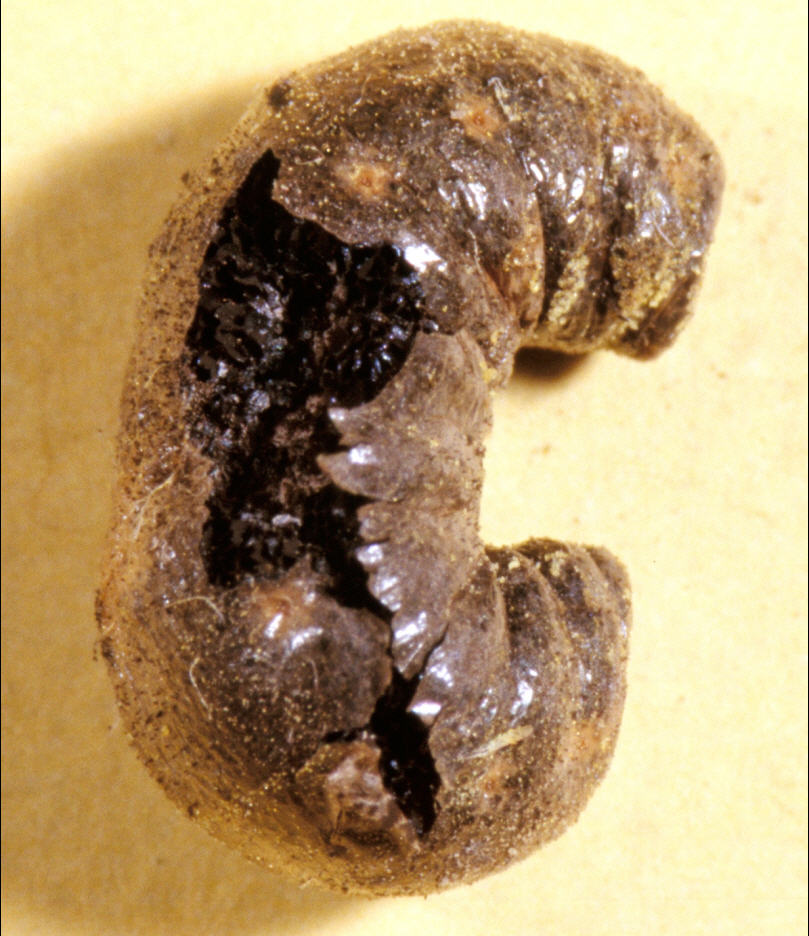 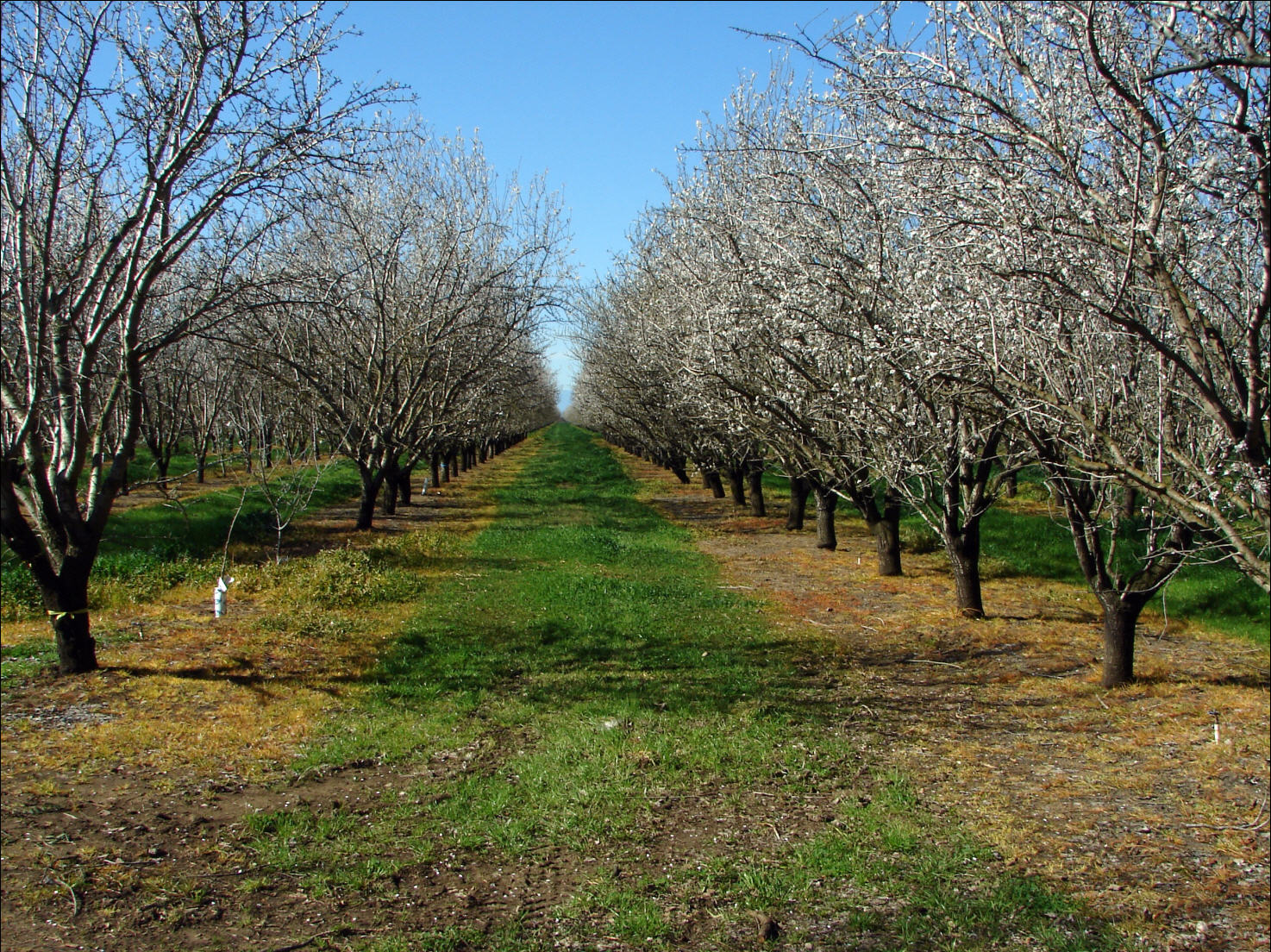 The cost of renting honey bee hives for almond pollination service was about $50 per hive in 2003, but in 2009, the cost had increased to about $150-170 per hive.  Between 2003 and 2005, the hive rental costs increased three-fold.  This increase was due to a shortage of bees caused, on one hand, by declines in honey bee colonies due to varroa mites and colony disorder, and on the other hand, to rapid increases in almond acreage.  The price of honey bee colonies is expected to level off at current prices as the markets come into balance.

Blue Orchard bees are a good supplement or alternative to honey bees for almond pollinations.  They are becoming commercially available for almond producers, although currently on a smaller scale than honey bees.  Our laboratory has been working on developing blue orchard bee pollination systems for 20 years.

While the cost of honey bee hives for other orchard crops is not as high as for almond, blue orchard bees are still a good supplement and help diversify the pollinator pool for these crops as well.

Management of the Blue Orchard Bee (BOB) is quite different than for honey bees.  BOBs have one generation per year and each female has her own nest.

Additional measures ideal for all pollinators

Nest material should: have holes about 5/16" in diameter (ideally, 19/64"); be about 6" long; be 3/4" apart (although, if hole entrances are offset, they can be closer); be plugged at the back to seal against light and parasites; be thick enough to block light and parasitism by wasps; should be lightweight and economical (although avoid plastic, it leads to mold); placed close to release site.  For more information on building a nesting board, view our instructions.

Shelters should: be open; face Southeast; provide protection from direct mid-day sunlight; be protected from rain; provide some morning solar warming in areas where temperatures are marginal for bloom and flight; ideally be spaced at 1 per acre; be large enough to provide 2-4 holes per female released; ideally be placed within orchard (in years of limited flight time, shorter flight distance restricts pollination to nearby trees); be small enough to be out of the way of spray rigs. 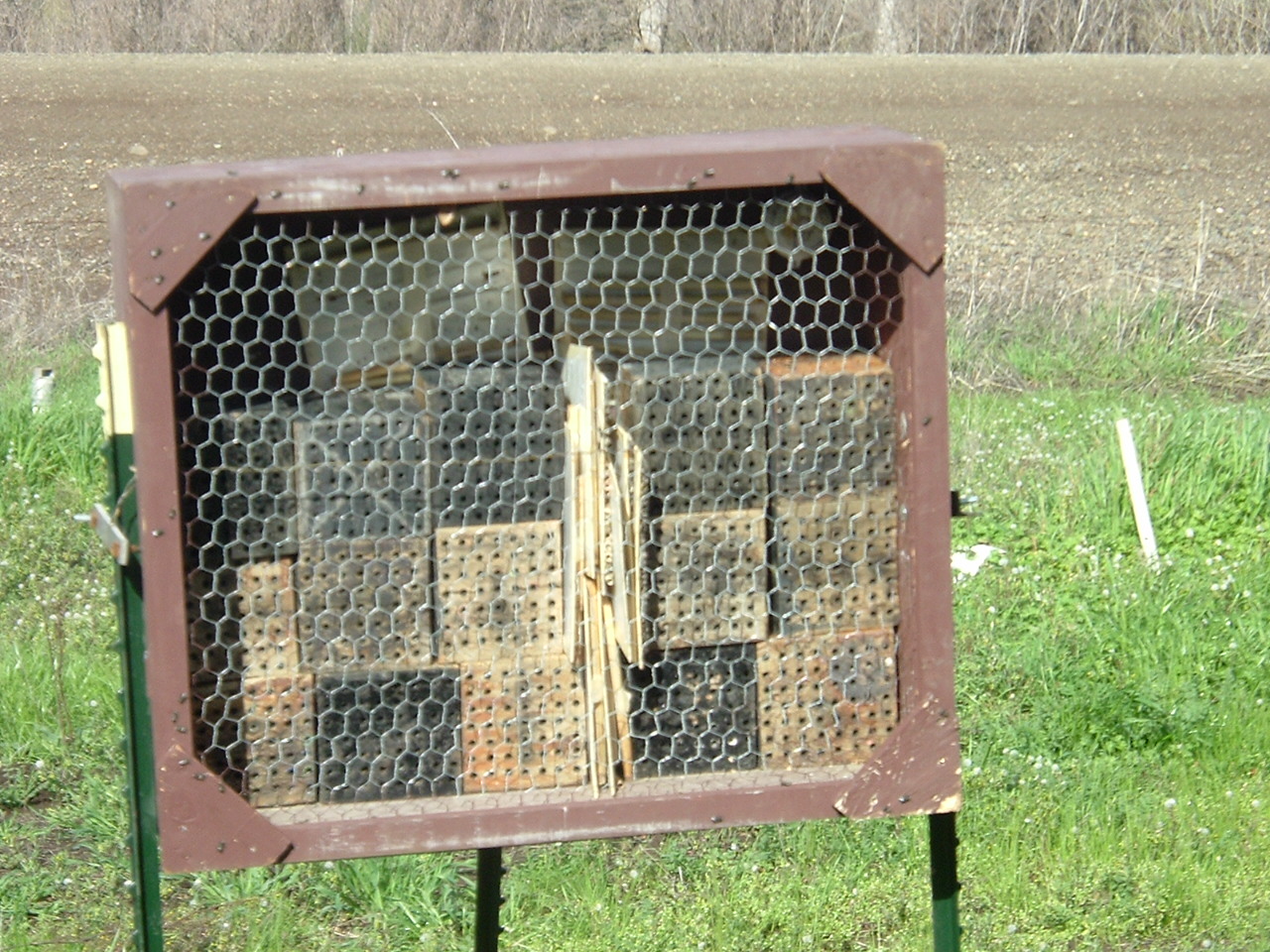 Further information on using BOBs can be found in our 2001 publication "How to manage the blue orchard bee as an orchard pollinator."  This book is currently out of print, but available in pdf format.