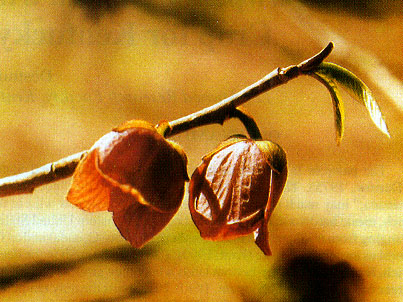 The pawpaw is unusual. This tree is the only temperate member of the tropical family, Annonaceae (Callaway, 1990). The fruits of this usually scraggly, wild, understory tree are the largest of any tree native to North America, and can grow to be as much as 1 kg (2 lb) (Layne, 1996). Although the tree is famous in folklore and song, few Americans have actually tasted of the rich, custard-like, highly nutritive, strong-flavored fruit.

The pawpaw is indigenous to North America. Fossils which closely resemble A. triloba are found in New Jersey and date to the late mioscene; others found in Colorado, Mississippi, Texas, and Wyoming date to the eocene (Peterson, 1991). The range of this species may have expanded from glacial refugia by dispersal by large mammals during the Pleistocene. Towards the end of this epoch, the first humans in North America began dispersal and selection of the fruit. Those peoples of the lower Ohio River Valley and the major tributaries collected and selected pawpaws.

The first documentation of pawpaws occurred in the 1541 report of the Hernando De Soto expedition (Layne, 1996). These Spanish explorers observed pawpaws being grown by native peoples from Florida to the Mississippi River. The people ate the fruit and used the bark to make fishing nets. Pawpaws also sustained the Lewis and Clark expedition in western Missouri during their return trip to the east in the fall of 1810 when their food supplies were low.

Pawpaws are sold in markets in the eastern U. S. Thus far, sales are modest because fruits are gathered from the wild or home grown trees (Peterson, 1991). Cultivation in commercial orchards is just beginning. Gourmet fruit markets and restaurants are expanding the demand. The fruit has potential for fresh sales, extracts for baby foods, dairy products such as flavorings for yogurts and ice cream, and food supplements.

The pawpaw has high nutritional qualities compared to typical temperate fruits such as apple and peach (Peterson, 1991). The fruit has a particularly low moisture content, high caloric content, high content for vitamins A and C, minerals P, Mg, S, Ca and Fe, and the essential fatty acids linoleic and linolenic. This fruit is also notable for a higher protein content than that of other temperate fruits and for an exceptionally favorable amino acid balance (Peterson, 1991).

A Word of Caution

While many people enjoy the taste of pawpaw, some individuals become sick after eating the fruit. Skin rash, nausea, vomiting or diarrhea can develop. In other cases, individuals may be allergic to the leaves or the fruit skin (Peterson, 1991).

Many tissues of this tree, especially bark, leaves, and seeds, contain a variety of alkaloids, phenolic acids, proanthocyanidins, tannins, flavinoids, and acetogenins. While these chemicals can cause allergic reactions, some of them are anticarcenogens and still others have natural or botanical pesticide qualities (McLaughlin and Hui, 1993; Zhao et al., 1994.)

The pawpaws are members of the family Annonaceae, a family of about 130 genera and about 23,000 species which mostly inhabit low elevations in the tropics. Asimina is the only genus native to the temperate zone. Kral (1960) grouped the pawpaws into two groups: northern Pawpaws and the Florida dwarf pawpaws. Wilbur (1970) revised the names of several taxa. Bowden (1948) observed that Asimina species contain 2n = 2x = 16 chromosomes.

Two of the Florida dwarf pawpaws are listed on the IUCN Red List of threatened plants. Asimina obovata , the Flang pawpaw, is listed at "rare" in Florida and Georgia, and A. tetramera, the four-petal pawpaw, is endangered in its very narrow range in Florida.

This species is also listed by the U. S. Fish and Wildlife Service Division of Endangered Species. This pawpaw is threatened by destruction of its habitat for commercial and residential construction. Most of the original sand pine scrub habitat is now urbanized, and the species is essentially confined to remnant areas of scrub vegetation on scattered sites. The four-petal pawpaw is protected in Jonathan Dickinson State Park, Palm Beach County, Florida. The National Clonal Germplasm Repository in Corvallis has accessions in ex situ preservation for both the Flang and the four-petal pawpaw.

Asimina germplasm is preserved at the U. S. National Clonal Germplasm Repository in Corvallis, Oregon; at Kentucky State University, and at the Wye Research Farm and Keedeysville Research Center of the University of Maryland. In 1993 a Regional Variety Trial was initiated in about 16 locations throughout the United States. Additional sites in China and Chile are also to be planted.

The pawpaw occurs as a forest understory tree in clumps or thickets which generally result from root suckering (Layne, 1997). When cultivated in sunny locations, the individual trees assume a pyramidal habit, straight trunk and lush, dark-green foliage. The leaves turn gold-brown during fall. The tree has very late bud-break in the spring. Leaves may emerge yellow and appear yellowish for the first several weeks of spring, particularly in northern latitudes. The tree grows optimally under maximum photosynthetic conditions of high summer air and soil temperatures, ample water, and high nitrogen rates. Recommended tree spacing is 5.5 m between rows and 2 m within the row. Row orientation should be north-south.

Flower bud initiation occurs in late July and early August. Pawpaws tend to be precocious under good conditions. Two year old grafted trees that are 1m tall may have as many as 40 flower buds. However, in Oregon we are finding that flower set on some (southern selected?) cultivars may be limited (Hummer, per. comm.).

Dormant vegetative buds are narrow and pointed and are quite readily distinguished from the more spherical flower buds.

Flowers emerge before leaves. Flowers are singly borne. Asimina triloba has maroon-colored calyx. Flowers of other species of the genus are cream colored. The flowers are strongly protogynous (which means that the female flower parts are receptive before the pollen of the same flower ripens), generally self-incompatible, and require cross-pollination. Flies and beetles are known to be pollinators in the native range for the species. The fruit develop as oblong-cylindric berries about 3 to 15 cm long by 3 to 10 cm wide (Layne, 1997). The fruit is borne in a cluster that resembles the "hand" of a banana.

The ripe flesh of this fruit is highly aromatic and tastes like a creamy mix of banana, mango, avocado, and pineapple. This fruit is "climacteric," like an apple and ripens very fast in the presence of ethylene. Neither the seed nor the skin should be eaten.

The fruit can be stored refrigerated for as much as three weeks.

Asimina triloba seed must be kept most to retain viability. Seed dormancy and embryo immaturity require a cool-moist (0 to 5oC) storage period (stratification), for 90 to 120 days. Young and Young (1992) recommend 100 days at 5 C. Germination is best in well-drained, slightly acid medium, with fluctuating diurnal temperatures between 25 and 30oC. Although radicle emergence can be as soon as 18 days, epicotyl emergence can require more than 64 days. Germination is hypogeal and the plumule is sensitive to light. Seeds prefer very warm soil conditions for germination. At 24 to 29oC seedlings emerge after 9 weeks. Soil temperatures from 29 to 32oC (optimum temperature) hasten emergence by 10 days. Seedlings tend to develop deep tap roots and deep pots are recommended.

Transplanting trees from the wild is usually unsuccessful. Transplant shock can be severe because trees dug from a thicket or grove are often root suckers with few feeder roots. Containerized seedlings transplant with much greater success.

Pawpaw cuttings do not root well and vegetative propagation by grafting and budding is recommended. Whip-and-tongue, cleft, bark inlay or chip budding are recommended. Chip budding is successful when the seedling rootstock is about pencil thickness and actively growing. Dormant scionwood should be grafted after chilling requirement has been met.

Vegetative propagation techniques such as root cuttings, hard and softwood cuttings, and tissue culture have marginal success. Hickman (1985) described a method of rooting softwood cuttings under intermittent mist. Cuttings 15 cm long with 3 leaves were taken in August. Leaf surface area was reduced. Stems were dipped in rooting hormone and were placed in sand:peat moss 1:1 by volume, however, percent rooting was low.