Citrus Canker is a bacterial disease of citrus. 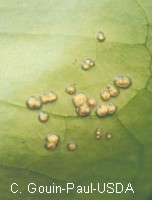 The causal agent of canker is Xanthomonas citri and was first identified in Florida in the early 1900's, and was thought to have come from imported infected trifoliate orange seedlings imported from Japan for use as rootstocks.

The bacteria cause lesions on the entire tree: leaves, fruit, stems etc. The disease weakens the tree and makes the fruit unsalable. The bacteria are spread by wind driven rain, contaminated pruning equipment, and use of infected seedlings when planting. The larva of a tiny moth called a leaf miner increases the severity of disease, because the tunnels or mines that it creates in the leaf are very susceptible for bacterial infection. See the photo to the right. 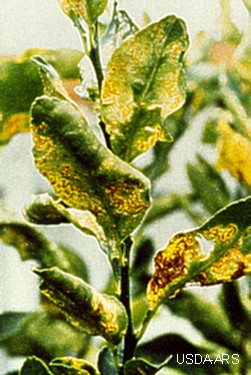 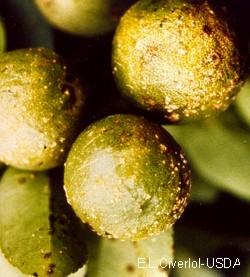 Trees with canker were removed from groves and residences (if allowed) and burned. When the eradication first began every tree within a 125 ft radius was also removed. Research demonstrated that this procedure was inadequate to stop the spread of the pathogen. At the height of eradication efforts every tree within 1900 ft radius of an infected tree was destroyed. Over 16 million trees, many in commercial citrus groves, were removed in the state of Florida due to canker infection.

In 1994 the Florida Department of Food and Consumer Services declared that they had completely eradicated the disease from the state. Unfortunately, the pathogen soon returned, possibly spread from infected privately owned trees back out into the commercial groves.

In 2006-2008 eradication efforts stopped largely due to multiple hurricanes which hit the state, thus spreading the bacteria too far and wide for effective control. Citrus canker remains a production problem, as infected fruit are blemished, difficult to sell, and likely to fall to the ground before they can be harvested. Grapefruit and lime are particularly susceptible to citrus canker.