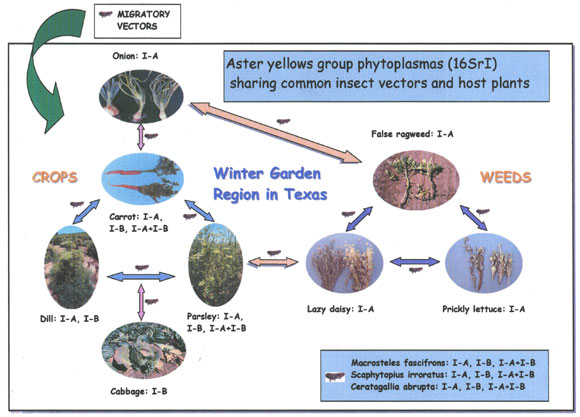 A proposed ecological model illustrating the three-way interaction among the vegetable crops, weeds, phytoplasmas, and insect vectors involved in the 2000 outbreak of aster yellows in the Winter Garden region of Texas.

The three predominant vectors present in this region are polyphagous and carried (or were infected by) 16SrI-A, 16SrI-B, or both phytoplasmas, although M. fascifrons primarily carried 16SrI-A phytoplasma strains.

Individual insects that carried both 16SrI-A and 16SrI-B were very common among populations of the vectors, A. irroratus and C. abrupta, collected from several representative fields. As a result, mixed infections were common in carrot, dill, and parsley. The ecological constrains of 16SrI-A or 16SrI-B phytoplasma strains in these plant hosts appeared to result from the three-way (phytoplasma(s)/vectors(s)/host plant(s)) interactions.

Three major contributing factors; all play an important role in determining the final constituent of phytoplasma type(s) in each individual plant or a given crop.

Sequence and phylogenetic analyses based on both 16S rRNA and ribosomal protein (rp) genes revealed that both subgroup A and subgroup B phytoplasmas were highly homogenous, indicating that the source of phytoplasma strains most likely originated from the same common pools.

The phytoplasma-carrying leafhoppers migrating from southerly latitude or elsewhere may present a primary source of aster yellows phytoplasmas responsible for the epidemic.