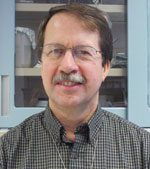 The overall goal of this project is to elucidate mechanisms that are pivotal to the plant/pathogen interaction with the intent that this knowledge will either help identify new strategies of disease control or aid in improving current control strategies by providing increased understanding.

In recent years it has become clear that oxidative metabolism affects and impacts various facets of life in both animals and plants and even more so during times of disease.

The field of oxidative metabolism is still in its infancy and not well defined but can be viewed as a collection of reactions in which electrons are either lost or gained (including redox reactions, light reactions, electron transport, and reactive oxygen reactions) and, although not necessarily part of the same biochemical pathway, they influence each other by their effect on the redox environment (which governs how readily electrons are exchanged).

There are reports of involvement in:

This project specifically addresses the role/effect of extracellular or apoplastic antioxidants on the early events of the host/pathogen interaction.

Objective 1:
Determine the role/effect of plant apoplastic antioxidants in susceptibility or resistance during the early events in plant/bacterial interactions.
Objective 2:
Describe the role of prooxidants and antioxidants in the apoplast-infection droplet microenvironment in preventing successful penetration of the host by fungal spores. 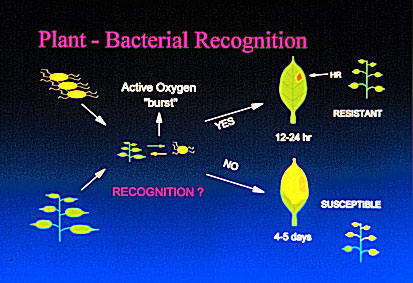 We are interested in the earliest response mechanisms of the plant after contact and recognition of a pathogen has occurred. Active oxygen production is one of these mechanisms that occur within the first few hours. These initial response mechanisms are critical to determining whether the outcome of the interaction will be resistance or susceptibility. 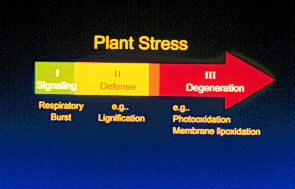 A chronological summary of events in plant pathogenesis that involve AO metabolism.