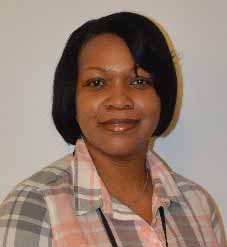 Tabatha serves as a Biological Science Technician in an entomology lab whose primary focus is the control of insects, affecting cotton, soybeans, and entomopathogenic fungi. She's required to identify insects and understands the roll they play in the field-crop environment, she's responsible for collecting and processing samples of insects 1.) insects in...2.) plants in...and 3.) fungi in... her involvement in the past six years has been on the biological control of Tarnished Plant Bugs (TPB) offending cotton using the insect killing fungus Beauveria bassiana. Tabatha's involved in laboratory and field evaluations B. bassiana isolates against, TPB and other insects. Tabatha also is involved in researched aimed at determining how to mass produce the entomopathogenic fungi Bb and M.A. She has experience growing these fungi using a wide variety of techniques including growth and Petri dishes, in flasks, on fiber bands and in spawn bags. Tabatha duties in this area include checking for culture contamination, spore viability, proper spore dying, and spore quantifications. Much of this work was performed using sterile technique.