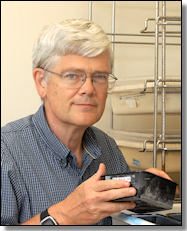 Sanford Porter is employed as a Research Entomologist for the USDA's Agricultural Research Service in Gainesville, FL. His specialty is the behavior and ecology of fire ants. He is currently evaluating and releasing phorid decapitating flies as fire ant biocontrol agents in the United States. He discovered that these parasites decapitate fire ant workers and then pupate in their heads. He also found that the impact of these flies on fire ant populations has been sufficient to cause the evolution of several phorid-specific defense behaviors. In 1996, he spent seven months on an ARS fellowship in Brazil studying these flies and developing ways to rear them in the laboratory.

Another achievement is a model of future fire ant distribution in the United States and countries around the world based on colony growth and winter survival. This information is important in assessing risk associated with the dispersal of invasion fire ants. Another study suggests that fire ant population densities in the United States are unusually high because fire ants have escaped natural biocontrol agents that were left behind in South America. Dr. Porter has also studied the distribution, expansion, and impacts of multiple-queen fire ants in Florida and throughout the southeastern United States.

Dr. Porter began his professional career studying the behavior and population dynamics of harvester ants in Idaho under the direction of Clive Jorgensen (1977-1980). He then moved to Florida where he studied fire ant thermoregulation and social organization under Walter Tschinkel, first as a PhD student (1980-1984) and then as an NSF funded postdoc (1984-1986). More recently, Dr. Porter worked with Larry Gilbert in Austin, Texas (1986-1989) where he tested new fire ant control products, provided advise and training for the Texas Department of Agriculture, and studied the biology of polygyne fire ants.

Dr. Porter has also engaged in a number of professional service activities. In 2009 he worked with Dr. Walter Tschinkel in organizing a symposium at the annual meeting of the Entomological Society of America to honor Edward O. Wilson and Bert Hölldobler, two giants in the field of social insect research. Dr. Porter served on the program committee and organized a symposium for the 2006 International Congress of the International Union for the Study of Social Insects (IUSSI). He served as Chair of Section C of the Entomological Society of America and on the Section C Executive Committee (2000-2004). He was an assistant editor for the Florida Entomologist (1993-1998). He served as President of the International Union for the Study of Social Insects - North American Section (1990-1991) and was a member of the executive committee for five years. He was chairman of a computer resources committee that put the Florida Entomologist online via the Internet. He was also the original compiler of FORMIS, a master bibliography of ant literature which currently contains more than 40,000 citations. This computer database is playing an important role in coordinating the research efforts of ant biologists throughout the world - more than 350 colleagues from 40 nations have copies of FORMIS and many others use it online via the Internet.

Porter, S. D. 2010. Distribution of the Formosa strain of the fire ant decapitating fly Pseudacteon curvatus (Diptera: Phoridae) three and a half years after releases in North Florida. Florida Entomol. 93: 107-112.

King, J. R., and S. D. Porter. 2004. Recommendations on the use of alcohols for preservation of ant specimens (Hymenoptera: Formicidae). Insectes Sociaux 51: 1-6.

Zacaro, A. A., and S. D. Porter. 1997. First report on the ultrastructure (TEM) of a truly parasitic phorid: the ovary of the scuttle fly Pseudacteon solenopsidis Schmitz (Diptera: Phoridae). Acta Microscopica 6B: 622-623.