Phorid flies in the genus Pseudacteon are 1) highly specific parasitoids, 2) broadly distributed across geography and climate, and 3) strongly affect fire ant foraging behavior. Maggots of these miniature flies develop in the heads of fire ant workers, decapitating their host upon pupation.

Fire ant workers are keenly aware of the presence of phorid flies. A single fly usually stops or greatly inhibits the foraging efforts of hundreds of workers. Reduced foraging facilitates competition from ants that might otherwise be excluded from food sources in fire ant territories. Morrison and Porter reported that the impacts of a single species of fly (P. tricuspis) did not rise above background variability (10-30%). However, the impact of all phorid species in South America is clearly sufficient to have caused the evolution of a number of phorid-specific defense behaviors and these behaviors could only have evolved if Pseudacteon flies impact the production of sexuals. Roadside surveys indicate that fire ant populations are lower in the last several years (2011-2013) than they were in the 1990s before phorid fly releases. Other studies have shown that decapitating flies disrupt foraging, potentially vector pathogens, and parasitize up to 5% of colony workers. 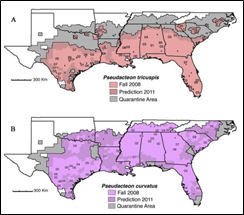