Epizootic Rift Valley fever has occurred in Kenya at least for more than 80 years, always associated with heavy rainfall in the generally dry, bushed, and wooded grasslands. Generally, regional widespread heavy rainfall in East Africa is associated with the development of a strong inter-tropical convergence zone, typically more enhanced during El Niño periods (Ropelewski and Halpert 1987). A key factor in RVF outbreaks seems to be widespread and persistent rainfall that results in significantly greater seasonal vegetation development than typically seen in long term means of the satellite-derived normalized difference vegetation index (NDVI).

The apparent failure of heavy local rain to produce no more than limited epizootics in most years suggests that other factors may be critical drivers in the production of RVF outbreaks during widespread surplus rainfall episodes (Davies et al. 1985). Persistent cloud cover and vegetation development may be important determinants for the survival of adult mosquitoes, a key factor in the generation of mosquito-propagated virus epizootics. Convective activity and air currents may be important agents for the transport of infected mosquitoes or other vectors of RVFV during epizootics (Sellers et al. 1982), and this could produce both local and distant extensions from the original foci of the epizootics. For example, the 1977 outbreak of RVF in Egypt was coincident with that in East Africa (Sellers, 1982). Additionally, movements of viremic wild or domestic ungulate mammals could transport RVFV into new ecological habitats. Genomic studies indicate that the RVF viruses introduced into the Arabian Peninsula in 2000 were very closely related to the viruses circulating in the 1997-1998 outbreak in East Africa (Bird et al. 2007).

RVF virus is probably maintained in inter-epizootic periods by transovarial transmission among successive generations of mosquitoes of the genus Aedes that breed in temporary ground pools known as dambos (Fig. 2a) in East Africa and dry pans or vleis in South Africa (Fig. 2b). 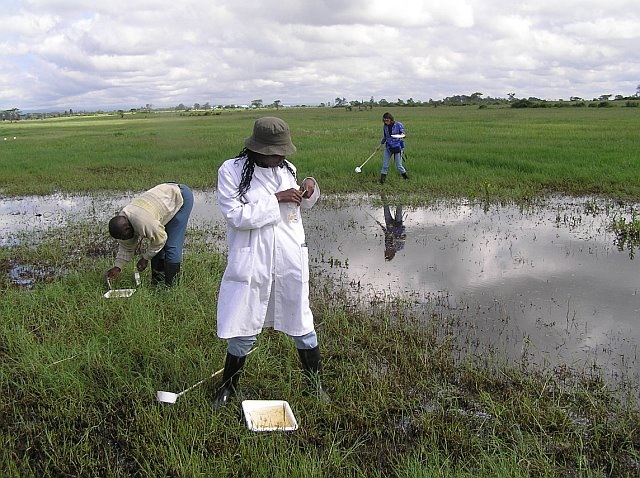 Figure 2a: Typical dambo ecosystem prior to outbreak in 2006 near Ruiru, Kenya. Entomologists collecting moquito vectors for laboratory analysis (Photo courtesy of Anyamba). 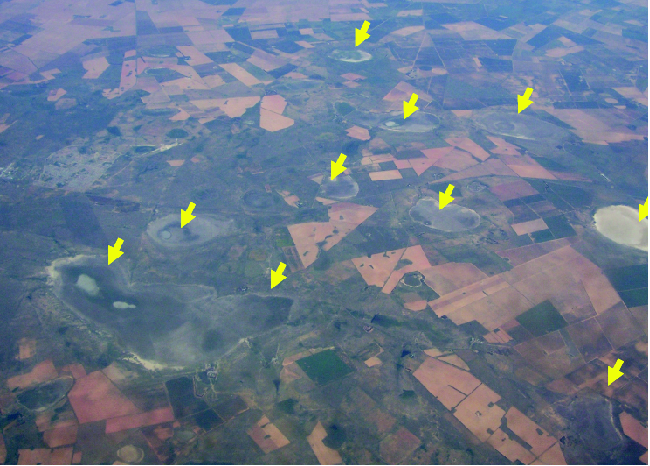 RVFV-infected Aedes eggs in dambos may survive and lie dormant through single or successive dry years, and will be replaced or augmented at low or moderate levels with new cohorts in normal or moderately rainy years when dambos flood for short periods of time. However, anomalously widespread and prolonged heavy rainfall raises the water table in certain areas, flooding these grassland depressions at greater depths and for extended periods. Within the first 20 days following flooding, Aedes eggs dormant in the soil will be induced to hatch, causing the subsequent emergence and survival of very large numbers of mosquitoes (Linthicum et al. 1983, 1984) (Fig. 3). 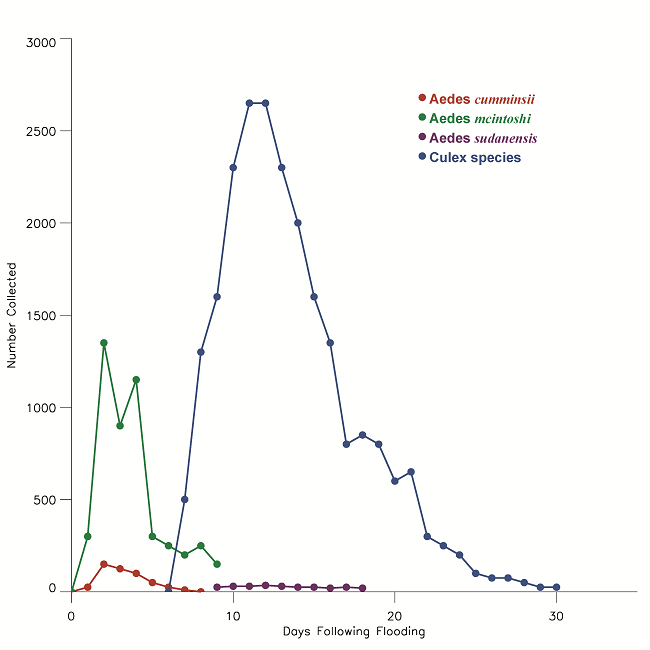 The humid conditions and persistent cloud cover present during prolonged rainy periods allow a greater proportion of the adult Aedes population to survive through more feeding-oviposition cycles than is possible in the hot, dry conditions usually prevailing in these areas. The massive populations of Aedes, some proportion of which is already infected with RVFV, will then preferentially feed upon domestic animals including cattle, goats, sheep and camels and some wild herbivores like buffalo (Linthicum et al. 1985). In the years of anomalously long and widespread rainfall the dambos also serve as good habitats for other important secondary mosquito vector species capable of transmitting RVFV that will become the dominant mosquito populations 30-40 days after flooding. Transovarially infected Aedes mosquitoes initially transmit RVFV to vertebrate ungulate hosts that provide a favorable reservoir for rapid amplification of the virus. Following the die-off of Aedes mosquitoes, later-emerging species including Culex and Mansonia then feed on these vertebrate RVFV reservoirs and themselves become infected and carry out the second wave of transmission of the virus, mainly to additional vertebrate hosts including livestock and humans (McIntosh 1972). Unfortunately, this period of secondary transmission is typically when the first clinical signs of the disease are first seen and the opportunity for effective control or reduction of primary transmission has passed.

Conditions that allow the emergence of RVF epizootics in Kenya often prevail simultaneously in Tanzania and Zambia and often in some of the southern African countries (Davies 1975; Swanepoel 1981). An annual emergence of infected Aedes mosquitoes may occur regularly in grassland areas with high rainfall, for example in Zambia (Davies et al. 1992) or in the tropical forest belt that traverses the continent zonally (Fig. 4). 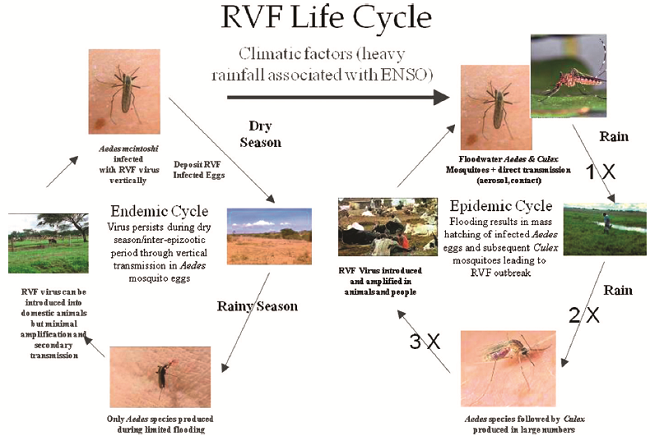 This is corroborated by serological studies for the presence of RVFV antibodies in human and ruminant populations in riverine and forest-edge settlements in such areas (Digoutte et al. 1974; Henderson et al. 1972; Maurice Provost 1969; Metselaar et al. 1974). In bushed and wooded savanna habitats (with moderately high rainfall) that cover most of the high plateau region east and to the immediate south of the African continental tropical forest, emergence of RVFV-infected Aedes may occur at 2-4 year intervals. In lower rainfall areas (< 500 mm/yr) of East and Southern Africa, epizootics of RVF generally occur at 5-15 year intervals wherein cycles of drought are followed by periods of excessive rainfall. These are the conditions prevailing throughout much of the RVF epizootic areas of Kenya (Davies et al. 1985). The most recent RVF epizootic/epidemics were in East Africa in late 1997 and early 1998 and 2006-2007 (Anyamba et al. 2010), and in Sudan in 2007 and in southern Africa 2007-2011 (Anyamba et al. 2010a, 2012b).