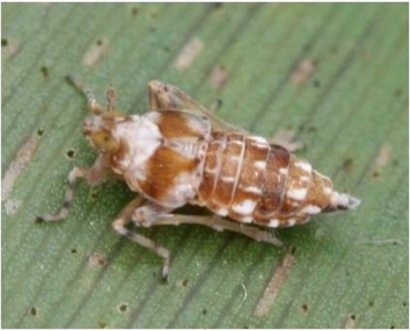 The Invasive Plant Research Laboratory has been investigating Integrated Pest Management (IPM) methods on waterhyacinth, combining chemical and biological control for this weed. One recent finding was that attack by biological control agents makes waterhyacinth more susceptible to herbicides. In that study, the feeding by the biological control agents N. eichhorniae and M. scutellaris reduced waterhyacinth biomass by 15.2%, and herbicides alone reduced biomass by 29.2%. However, when biocontrol and chemical control were combined, biomass was reduced by 99.4%. Feeding by the insects likely weakened the plants to the point that even a reduced rate of herbicide was as effective as the currently used, higher operational rates. A simple logistic model predicted that the presence of the biological control insects will reduce the number of herbicide re-treatments from five in a year to just two, or a 60% reduction. In addition, the pattern of spraying may increase the effect of the insects by providing internal refuges within sprayed mats whereby insect attack would be more damaging to any remaining plants through increased densities as the insects move from sprayed to unsprayed plants.

For more details please reference links to publications below: