Small hive beetles (SHB), Aethina tumida Murray (Coleoptera, Nitidulidae), were first detected in the United States in 1996. Although they are relatively harmless pests in their native South Africa, they have become serious pests of honey bees, especially in the southeastern region of the United States.

SHB eats everything (pollen, brood, honey, dead adult bees and combs) in the colony, causing honey to ferment in the process. Fermented honey usually runs out of the comb, creating a mess within the hives (a) or honey house. Although weak colonies (b) are more prone to SHB invasion, strong colonies can also be overwhelmed (a). 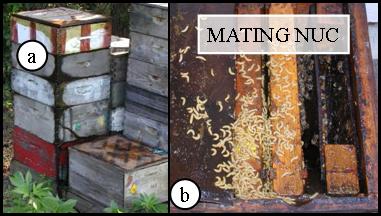 The life cycle of SHB goes through different stages: eggs, larva, pupa and adult. Temperature significantly influences their developmental period; higher temperatures shorten development to about 23 days, and cooler temperatures extend their development to about 39 days. Infestations peak during late-summer months through the fall season when most beetles are emerging from the soil. This increase in adult population is usually a result of massive infestations and reproduction from honey bee colonies destroyed by SHB during the summer months. 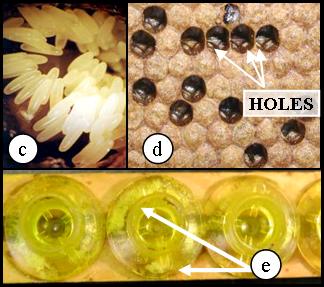 Eggs are white in color (c). They are deposited in masses inside sealed brood by making a small hole on the cell capping or through the cell wall (d). Generally, a comb is not required for egg-laying. Females can also lay eggs in crevices, e.g. underneath queen cell cups (e) used in queen production. The egg incubation period takes about 2 to 3 days.

The larvae are cream in color and have 2 rows of spines on their dorsal surfaces with 2 larger spines located at the posterior end of the larvae (f). The larval stage is the most damaging stage. There are 3 larval instars that are active feeders. The feeding stage lasts for about 5 to 8 days. The late stage of the third-instar larvae stop feeding (this non-feeding stage is known as the wandering phase) and leave the hive and burrow in the soil, remaining mobile for about 5 to 10 days. While mobile, they make smooth-walled pupation cells - occasionally multiple cells - until reaching the immobile stage. At this point, the larva becomes short and stout. The larvae can pupate in any type of soil; generally pupating just below the surface of the soil.

The white beetle pupae (g) take 5 to 11 days to develop and become young adults. These young adults are very fragile; thus, they remain inside the cells for another 5 to 9 days to mature. About 75% of the beetles' developmental time is spent in the soil as larvae (h), pupae (i) and then as young adults (j).

When mature adults emerge from the soil (23 or 39 days), they are maroon in color but will turn darker as they age. They are about 1/3 the size of a worker bee (k). An easy way to identify SHB adults is their clubbed antennae (l) and sinuated margin of the thorax (m) and shortened elytra (n), which are the hard wing coverings of adult beetles. 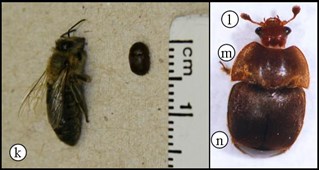 The female has a long ovipositor extending straight from the tip of the abdomen (o), while the male genitalia can be viewed ventrally extending at a right angle when viewed sideways (p). The male also has an 8th tergite (q), which is absent in the female.

The presence of pollen, brood and honey is necessary for successful mating and reproduction of SHB. Females can begin to lay eggs within 24 hours of emergence. Honey alone does not stimulate egg-laying but can support extended survival of adult beetles for about a year in the laboratory.

Females mate several times with different males. Reproduction also depends on temperature. An adult female mated with one male can lay an average of 165 eggs per day at room temperature. Egg-laying increases at higher temperature.

1. Keep colonies strong. Do not stack infested supers onto strong colonies. Freeze lightly infested combs before re-using them and burn heavily infested ones.

2. Maintain queen right colonies only. Do not allow queenless colonies to become weak or turn into drone layers. Queenlessness will attract beetles, and the presence of a small amount of brood and also pollen encourage beetles to reproduce. Combine colonies if necessary

3. Do not add supers or put brood on top supers if bees cannot take care of them. Similarly, avoid putting brood frames against the wall and avoid squeezing brood against the wall of the box or adjacent frames. Empty frames can serve as hiding places for SHB while unattended, and squeezed brood will attract beetles and stimulate reproduction.

4. Remove burr combs and propolis (corals) since they can also serve as hiding places for adult beetles. Their removal will expose SHB to the aggressive behavior of bees.

5. Remove dead colonies as soon as possible. Prompt action will prevent larvae from reaching the matured stage (wandering phase), minimizing the number of larvae that leave the hive to pupate in the soil.

6. Place colonies under the sun. Research has showed that out-hive traps positioned in a shaded part of an apiary trapped more beetles than those exposed to the sun.

7. When feeding colonies with pollen supplement, provide just enough patties to be consumed in two days. Excessive amounts will support SHB reproduction and allow larvae to develop and mature.

8. Keep in-hive feeders and bottom boards clean. Dead bees in feeders, and pollen and dead bees on bottom boards, can serve as sources of protein, which stimulates SHB reproduction.

9. Keep honey houses neat and clean. Store frames with pollen and brood in a freezer since these two are the main sources of protein that stimulate reproduction.

10. Extract honey within 2-3 days before massive hatching of eggs occurs. Return wet supers immediately. If done within 4 days (or before larvae reach wandering phase), allow wet supers to be robbed out by bees before putting them onto colonies or storing them. Melt all wax cappings as soon as possible.

Through Section 18, Checkmite+ can be used to regulate SHB populations inside the colonies. It is formulated using the active ingredient coumaphos (10%), an organophosphate pesticide impregnated in a plastic strip. Staple strips onto a piece of cardboard (q) or corrugated black plastic (r), and put it on the bottom board of the colony. Be sure that honey supers are removed before applying this material.

Another control measure is drenching the soil with GardStar (s) to kill developing pupae. It should be applied by low-pressure spray equipment or sprinkler can. Both chemicals should be used appropriately and according to label directions. Misuse of them may result in the contamination of honey and beeswax.