During the Dust Bowl era in the 1930's, soil conservation became a national focus. In 1935, Congress passed legislation establishing the Soil Conservation Service (SCS) as a permanent agency in the USDA. The creation of the SCS represented the culmination of the efforts of Hugh Hammond Bennett, “father of Soil Conservation” and the first SCS Chief, to awaken public concern for the problem of soil erosion. Shortly thereafter, major engineering problems were recognized with regards to soil and water conservation practices associated with the design of terrace and terrace outlet systems, gully-control works, and structures used for the collection, conveyance, and disposal of surface runoff. Because conservation engineering was in its infancy, there was a serious lack of research, publications, and design tools available regarding this field of study. With input from a survey of field technicians, a comprehensive research program was planned, and SCS set out to establish the USDA-SCS Outdoor Hydraulic Laboratory near Spartanburg, South Carolina by 1936. The research mission of the Spartanburg laboratory was to study hydraulic characteristics of vegetal channel linings for sediment and erosion control.

At the time the Spartanburg laboratory was established, it was concluded that the laboratory would relocate every five years to test the indigenous vegetation across the country. By 1939, the scientific staff in Spartanburg began to search for a relocation site and had heard about Stillwater, Oklahoma being a potential site. Lake Carl Blackwell dam near Stillwater had been completed a few years earlier by the Land Utilization Agency, but it was transferred to SCS in 1938. USDA reached an agreement with Oklahoma A&M College, now Oklahoma State University, for use of the dam, reservoir, and property surrounding the lake. Maurice Cox with Oklahoma A&M College Agricultural Experiment Station began research on vegetated waterways using water directly from the lake. This research sparked interest from the scientists from Spartanburg, so the two groups decided to meet to discuss the potential relocation of the Spartanburg research program. An agreement was reached between the two parties, and by the end of 1940, construction began on what would become the present-day USDA-Agricultural Research Service (ARS) Hydraulic Engineering Research Unit (HERU) with W.O. (Bill) Ree, designated as laboratory director.

The laboratory is located approximately 7 miles west of Stillwater, Oklahoma just downstream of Lake Carl Blackwell dam. With approximately 100 acres available for the establishment of the laboratory, Ree had great vision for expanding the research program beyond its initial charge. By the summer of 1940, Ree arrived in Stillwater to make a topographic survey of the site. The survey data was used to begin plans for constructing a network of channels that had sufficient slope to deliver water discharged from the lake through means of gravity. To deliver the water from Lake Carl Blackwell reservoir, five 20-inch diameter siphons were designed and constructed over the dam that could deliver water at a rate of 200 cubic feet per second. Shortly, thereafter, the dam was raised to provide additional flood storage for the City of Stillwater, so when viewing the siphons today, one will observe the siphons going through the dam. This change to the dam would eventually lead to a lowering of the siphons flow capacity to 120 cubic feet per second (cfs) as the siphons developed pinholes in the 1990’s. The redesign of the siphons resulted in 18-inch diameter siphons sleeved inside the existing 20-inch diameter siphons. With the vast amount of land available for conducting small to real-world scale structures and with the flow capacity of 120 cfs available, our laboratory is one of the most unique facilities worldwide for conducting this type of research today.

By 1953, USDA established a new agency within the department, the USDA-Agricultural Research Service (ARS). The Agricultural Research Service was created as the USDA’s primary scientific research agency. With the reorganization of the research programs within USDA, the HERU was removed from the oversight of USDA-SCS and placed in the newly formed USDA-ARS. The early-day purpose of the laboratory in Stillwater was to continue research on the hydraulics of grass-lined channels, including terrace outlet channels, farm reservoir emergency spillways, diversions, and meadow strips. Research later expanded to incorporate hydraulic structures, including grade stabilization structures (i.e. hood inlet pipe spillways, low drop structures, and rock chutes). The congressional passage of the Flood Control Acts of the 1940s and 1950s created the USDA Small Watershed Program, a program administered by the USDA-Natural Resources Conservation Service (NRCS) (formerly SCS). This program allows USDA-NRCS to provide technical and financial assistance for the construction of flood control dams on the upper tributaries of watersheds. To date, nearly 12,000 multi-purpose dams (i.e. flood control, recreational use, municipal and rural water supplies, wildlife habitat, among others) have been constructed across the U.S. Research provided by HERU scientists led to standard designs for all components (i.e. trash inlet guards for closed conduit spillway entrances, cantilever pipe outlet riprap design for plunge basins, and vegetated earthen auxiliary spillways) of the dams such that a USDA-assisted dam constructed in California would look like one in Oklahoma, New York, and elsewhere in the U.S. In 1983, the only other hydraulic structures USDA-ARS research unit, the Saint Anthony Falls Laboratory in Minneapolis, Minnesota, was closed, and its function was integrated into HERU’s research mission.

In addition to research related to hydraulic structures, significant advances were made in watershed runoff measurement through the improved flow measurement devices and calibration procedures of H-flumes and supercritical flow measuring flumes. Advancements also continued in vegetated channels, concentrated flow erosion, and headcut erosion. This research led to the development of soil erodibility methodologies (i.e. submerged JET device) for the analysis of soil erodibility and critical shear stress on soils used for earthen spillways. Refinement and modification of the JET over the years has made it a more portable unit. Today, it is used to evaluate erosion resistance of soil in stream beds, stream banks, irrigation canals, levees, dams, clay liners for waste water impoundments, among others. In addition, the JET is integral for the software users as it may be used to provide soil input parameters. In fact, the soil erodibility research has led to refinement in other computational models such as SWAT (Soil and Water Assessment Tool), and BSTEM (Bank Stability Toe Erosion Model).

Laboratory scientists have worked in cooperation with the USDA-NRCS since the laboratory’s inception. This collaboration combined with cooperation from Kansas State University has led to the development of engineering tools used by engineers worldwide. These tools include SITES (Water Resource Site Analyses software) and WinDAM (Windows Dam Analysis Modules). The SITES software is used for erosion prediction of earthen spillways. WinDAM is used in the evaluation of dams for breach potential and the prioritization of dams for rehabilitation.

Today, HERU scientists conducts research in support of the USDA dam rehabilitation program. Specifically, HERU scientists conduct research on large-scale physical models to examine and evaluate the breach potential of embankment dams through overtopping or internal erosion. In addition, scientists are also conducting research to develop standard design criteria for overtopping protection systems like stepped spillways. Under Ree and his successors’ leadership, the laboratory gained national and international recognition as a significant contributor of sound design criteria for soil and water conservation structures and channels. The American Society of Agricultural and biological Engineers has twice designated the HERU as a Historic Landmark of Agricultural Engineering: in 1990 for Design Concepts for Vegetated Waterways and in 2011 for The USDA Small Watershed Program. 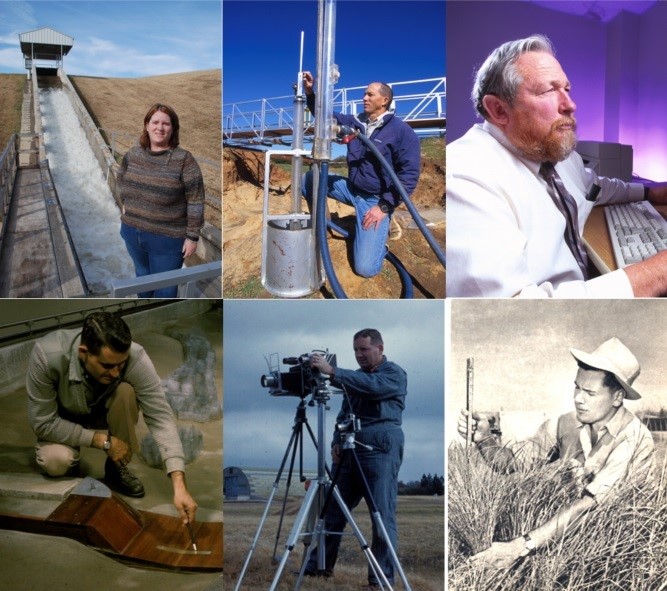