Vegetated Waterways
-The Making of a Historic Landmark

During the Dust Bowl era, soil conservation became a national focus. In 1935, Congress passed legislation establishing the Soil Conservation Service (SCS) as a permanent agency in the USDA. The creation of the USDA-SCS represented the culmination of the efforts of Hugh Hammond Bennett, “father of Soil Conservation” and the first SCS Chief, to awaken public concern for the problem of soil erosion. Shortly thereafter, major engineering problems were recognized with regards to soil and water conservation practices associated with the design of terrace and terrace outlet systems, gully-control works, and structures used for the collection, conveyance, and disposal of surface runoff. Because conservation engineering was in its infancy, there was a serious lack of research, publications, and design tools available regarding this field of study. To address these issues, USDA-SCS established the Outdoor Hydraulic Laboratory near Spartanburg, South Carolina in 1936. The research mission of the laboratory was to study the hydraulic characteristics of vegetal channel linings. By 1940, the Outdoor Hydraulic Laboratory was relocated to Stillwater, Oklahoma where the research mission was continued and led by Mr. William (Bill) O. Ree, who was named laboratory director. The relocation of the laboratory was an attempt to centralize research efforts, to build collaborations for the common good of developing design concepts for vegetated channels to address the issues being observed in the field, and to improve facilities that were lacking in Spartanburg. Ree teamed with Mr. Vernon Palmer, a scientist at the laboratory, and Mr. Maurice Cox, a scientist with the Oklahoma Agricultural Experiment Station to better understand the use of vegetation for providing erosion protection. Their research would go on to be published in the 1946 publication, SCS-TP-61 Handbook of Channel Design for Soil and Water Conservation. The design concepts developed by Ree, Palmer, and Cox would eventually bring recognition to the USDA-Agricultural Research Service (USDA-ARS), Hydraulic Engineering Research Unit (HERU), formerly the USDA-SCS Outdoor Hydraulic Laboratory by the American Society of Agricultural Engineers in 1990 as a history landmark in agricultural engineering. At the time of the dedication of this landmark, it was estimated that over 500,000 miles of grassed waterways had been designed and constructed worldwide based on this design criteria. These design concepts have held the test of time as it is the same design concepts taught to collegiate engineering students today. 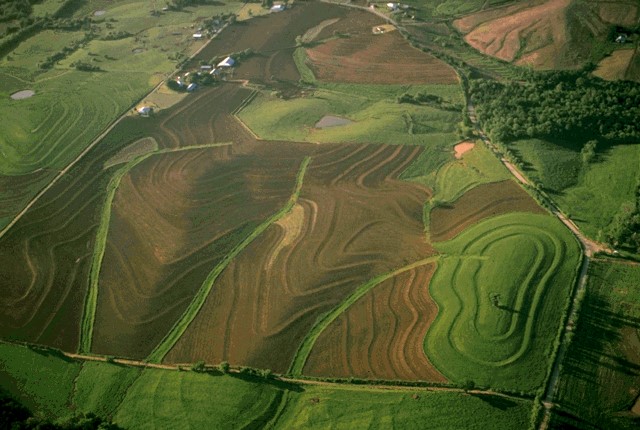 Bird’s eye view of vegetated waterways on an agricultural landscape.