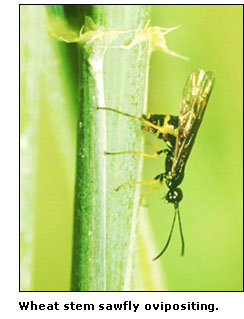 The wheat stem sawfly, Cephus cinctus (Hymenoptera: Cephidae), is an important pest of wheat and other grain crops in the northern Great Plains. The insect is found across much of western North America though damage to wheat occurs primarily in Montana, the Dakotas, western Nebraska, eastern Wyoming, and the Canadian Prairie Provinces. Sawfly larvae feed inside the stem, reducing the number and weight of the kernels. The sawfly larva moves to the base as the plant senesces and cuts the stem to construct a pupation chamber. The weakened stem breaks and the grain lodges, adding to yield losses and making harvesting difficult. Field infestation levels of greater than 80% have been reported with yield losses of as much as 20% in some years and locations. Damage caused to wheat in Montana alone has been estimated at $25 million annually.

Current management practices for the wheat stem sawfly, resistant wheat cultivars and various cultural practices, have not been effective in minimizing losses. An alternative strategy, biological control using exotic parasitoids, is the focus of research at NPARL. Biological control of the wheat stem sawfly using parasitoids from England and France was attempted unsuccessfully in Canada and the US in the 1930s, and again in the 1950s. In contrast to these failures, these parasitoids were successfully established at about the same time on the European wheat stem sawfly (Cephus pygmaeus) in eastern North America. Why didn't it work in western North America? There may be several reasons including host incompatibility, lack of synchronization, and environmental unsuitability. European parasitoids may be well suited to  climatic conditions in eastern North America but poorly adapted to the colder, drier weather of the northern Great Plains.

Therefore, the current wheat stem sawfly biological control effort is focusing on finding, identifying and evaluating wheat stem sawfly parasitoids from Asia. Collyria n.sp. (Hymenoptera: Ichneumonidae) was first collected in Gansu Province in China in 1999. We are currently evaluating this species in the insect quarantine laboratory at Montana State University-Bozeman.