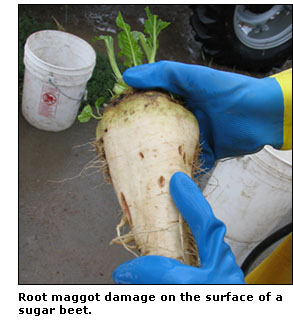 Sugarbeet root maggot (Tetanops myopaeformis) is the most significant pest of sugar beets, primarily in Minnesota, North Dakota, and Idaho, and secondarily in Nebraska, Colorado, Montana, and Wyoming. The insect affects 49% of a total of approx. 567,000 sugarbeet hectares in the U.S. Without control tools, yield losses in the Red River Valley would commonly reach 40%. The organophosphates terbufos, phorate, and chlorpyrifos, and the carbamate aldicarb are the mainstay control tools. In 1998 and 1999 an average of 390,000 sugarbeet hectares (65% of all acreage) were treated with chemical insecticides, mostly terbufos. Cultural controls and host plant resistance are in early stages of development. Biological control has been pursued by USDA since the early 1990s, but without success for any stand-alone organisms. Thus, there is a critical need for a biologically based, IPM system that will reduce farmer's reliance with restricted use of pesticides.

We are focusing on the development of a fungus, Metarhizium anisopliae, into a commercially feasible mycoinsecticide to manage the sugarbeet root maggot, as well as wireworms and the sugarbeet root aphid -- important secondary pests of this crop. Metarhizium has been known for over 100 years as an insect pathogen and has been commercialized in a number of countries for use against a variety of insects. Spores of this fungus, similar to spores of a bread mold, will germinate when they land (or are placed by human application) on the surface of an insect. Using a cocktail of enzymes and mechanical pressure the fungi penetrates through the cuticle of an insect within 24 hours and start to grow through the body. There is not much defense that an insect can offer. Infection is almost always fatal. These fungi are specific to insects, because they don't infect amphibians, fish, birds, or mammals.

Metarhizium can be, and is being, mass produced on a ton scale. Our main candidate strain of this fungus - "F52" - has been registered by a company with the U.S. Environmental Protection Agency (EPA) for use against other insects, thus overcoming the expensive obstacle of generating safety data for a registration before it can be used by farmers.

We have been evaluating different methods of applying the fungus to sugar beets: (1) as granules applied at planting into the furrow along with seed, granules that support the subsequent growth and sporulation of the fungus to create an "infectious minefield" through which larvae have to crawl to reach the root; (2) as a spray of fungal spores applied to the bases of plants just before the adult flies lay their eggs so that newly hatched maggots have to crawl through that infectious minefield of spores and thus become infected; and (3) as a seed coat of spores that germinate after planting and allow the fungus to potentially colonize the developing root and thus intercept the young maggots as they begin to feed.

Our field trials since 2001 have demonstrated that Metarhizium can be a successful control of the maggot, equal to terbufos, when insect pressures are light, such as in Montana and Wyoming. But when sugarbeet root maggots are very numerous, such as in the northern Red River Valley, the fungus cannot be used by itself. Other tools are needed, such as integration with an oat or rye cover crop, or with reduced rates of chemical insecticides. Such integrated pest management approaches are being evaluated for effectiveness and practicality in a collaborative program with North Dakota State University.

In parallel with field trials of the fungus, we have been examining the many and varied biotic and abiotic soil factors that can affect both the persistence of the fungus and its efficacy against the maggot. These factors include soil texture (silt:sand:clay ratio), pH, organic content, moisture, temperature, and the microorganisms inhabiting the sugarbeet root surface and adjacent soil ("rhizosphere").

Colonization of a sugarbeet root system by Metarhizium, or its "cousin " species, Beauveria bassiana, has not yet been conclusively demonstrated. We have transformed several strains of each fungus with the gene for producing a green fluorescent (gfp) protein, which glows when illuminated by UV light. This gfp-transformation allows us to directly observe the fungus on the root system of a plant.  Root colonization by these fungi does occur, at least in a microorganism-free system. We are using this tool to examine all the factors, especially the many bacteria and fungi associated with sugar beet roots in nature, that may affect root colonization by Metarhizium and Beauveria. We are also examining the competitive interactions between several strains of these fungi, the sugarbeet rhizosphere organisms, and plant pathogenic fungi.