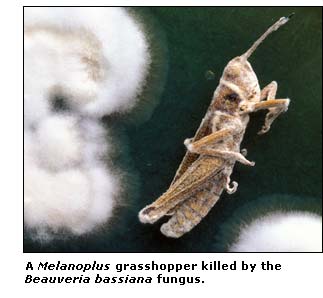 Suppression, the third tier in grasshopper management, has traditionally relied on broad spectrum insecticides which often have negative impacts on nontarget organisms. Biologically based, environmentally friendly suppressive tools are lacking. Neither of the two U.S.-registered agents,  Nosema locustae and Beauveria bassiana, are very efficacious or cost effective on rangeland. The efficacy of these existence agents must be enhanced or new agents are needed to make biologically based suppression feasible.

Two approaches to increase efficacy are to enhance dose transfer to target insects via an "attracticide" formulation, and to prolong persistence thus expanding opportunity of contact with the agent. To do this, we have been concentrating on carriers that attract grasshoppers. One such is raw canola oil, which contains certain fatty acids that have been shown to mimic the odor of a dead grasshopper and stimulate necrophagy among these insects. Another is a confectionary industry by-product.

The second major weak link in obtaining a commercially viable mycoinsecticide for outdoor use is poor persistence in the field. Solar radiation, primarily the UVA and UVB spectra, is a major factor compromising the consistent, persistent performance of fungal entomopathogens. On rangeland, efficacy from a single spray of commercial Beauveria is lost within 4 days. We are evaluating several novel formulation technologies for their applicability for grasshopper control.

The fungus Metarhizium anisopliae var. acridum  has been developed in Africa and Australia for the control of locusts, and is under development in Brazil, Mexico, and China. This fungus, which is specific to grasshoppers and locusts, could provide an effective, and economic, tool to control locust outbreaks in the U.S.  It is far more infectious for Orthoptera than the currently registered Beauveria. We are working to bring either or both of the existing isolates into the U.S. for large scale field trials in cooperation with USDA APHIS.