Research on the Coccinellidae 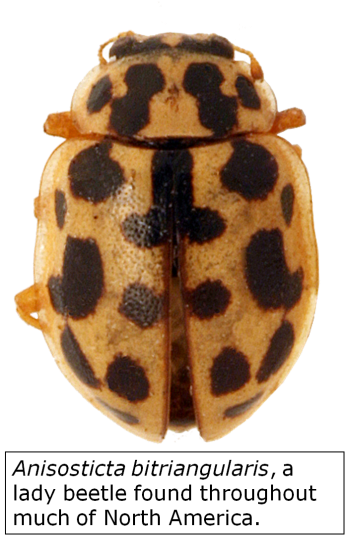 The Coccinellidae, or lady beetles, are mainly considered beneficial, with about 90% of the species feeding on primarily aphids, scale insects, whiteflies, mealy bugs, and mites (Giorgi et al. 2009). Thus, they are important biological control agents of such arthropod pests (Obrycki and Kring 1998). Other species of lady beetles feed on fungi or plants. Some of the species that feed on plants are considered pests.

Some species of coccinellids seem to be less abundant than they were previously in North America, including Coccinella novemnotata (ninespotted lady beetle), Coccinella transversoguttata richardsoni (transverse lady beetle), and Adalia bipunctata (twospotted lady beetle). If you find one of these 3 species in South Dakota or neighboring states, please let me know (WANTED POSTER - PDF). Populations of Hippodamia convergens (convergent lady beetle) have also declined in the northeastern United States. Sometimes, these species in decline are referred to as "Lost Lady Beetles" or "Lost Ladybugs."

The Lost Ladybug Project* was developed to search for declining species, and it relies heavily on citizen scientists to spot lady beetles throughout North America. Funding for the LLP has come from the National Science Foundation