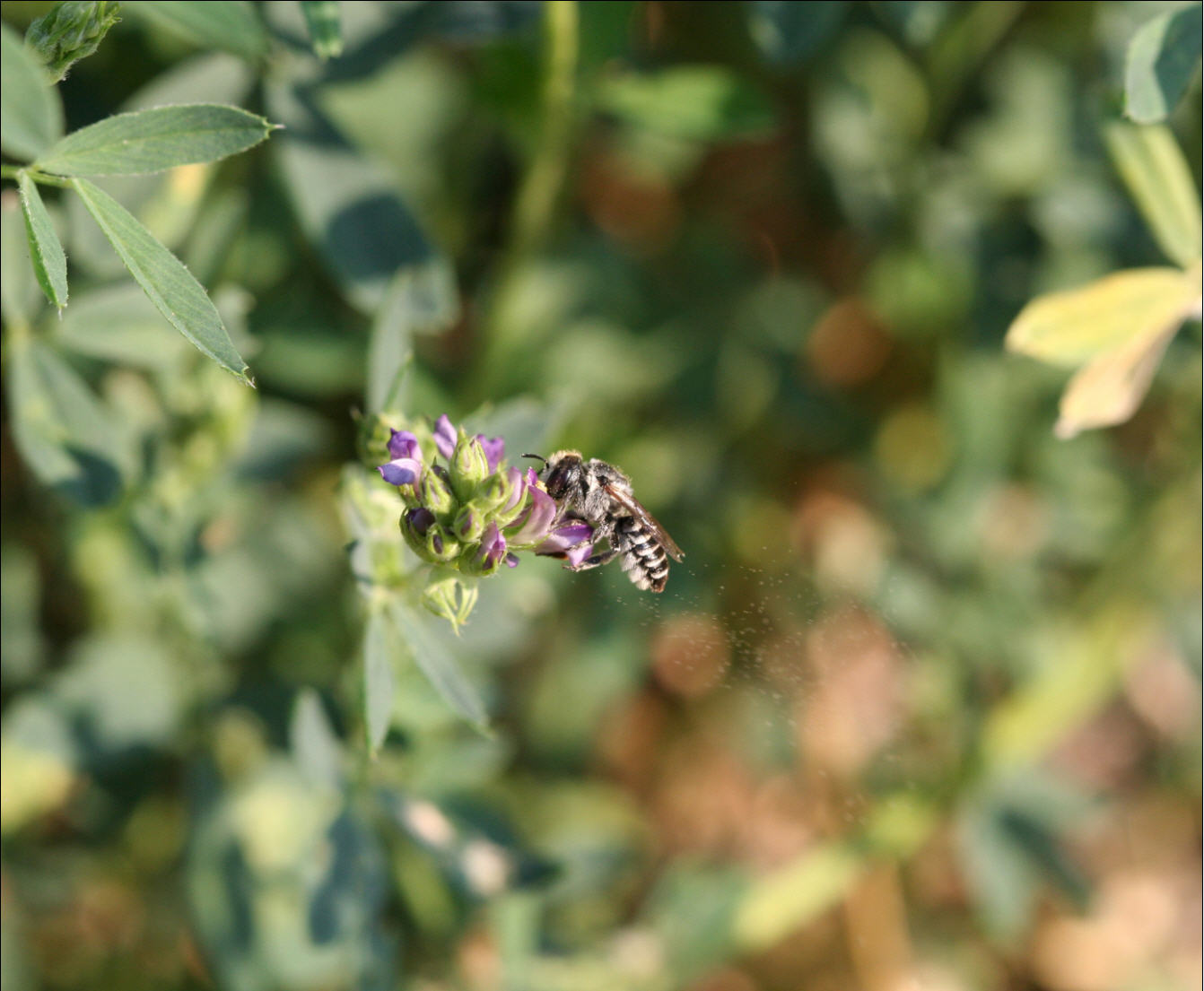 The alfalfa leafcutting bee, Megachile rotundata, is a very important pollinator of alfalfa for alfalfa seed production.  This bee species was introduced to the United States from Eurasia in the late 1930s.  Wherever the bee is managed efficiently and effectively, alfalfa seed yields increase dramatically compared to pollination with honey bees or no bee.  The alfalfa leafcutting bee is solitary and lives only several weeks in the summer.  After mating with short-lived males, female bees construct their own nests, gather nectar and pollen for provisions in individual nest cells, and lay eggs on the provisions.  At the end of the summer, females die without ever seeing their offspring that spend the winter as prepupae (large larvae) in leaf-lined cocoons. 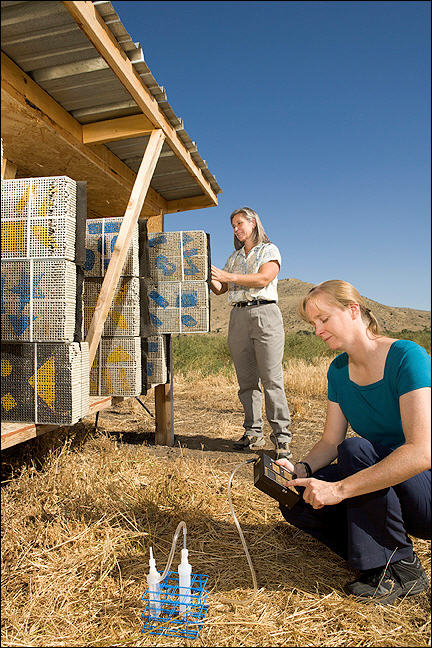 Rosalind James and Theresa Pitts-Singer examine bees at a domicile
of nesting boards in an alfalfa seed field.

Large numbers of leafcutting bees (40,000 to 60,000 per acre) are used to pollinate an alfalfa seed crop.  Bee emergence is synchronized with the beginning of the alfalfa flower bloom, and this requires expertise in both bee management and alfalfa management.  In order to mass-produce and release the leafcutting bee for commercial pollination, bee boards containing a few thousand artificial nest cavities are placed in domiciles in alfalfa seed fields.  The gregarious females use these cavities for their nests, each being able to find her nest among thousands of others.  In late summer or fall, the boards containing bee nests are removed from fields.  During the late fall or early winter, managers then remove nest cells from the bee boards using special equipment made for this purpose, and then tumble the cells to filter out those that are empty or diseased.  These "loose" cells are then placed into cold storage (41?F, 5?C) for several months.  In the early summer, the bee cells are placed into screen-topped trays and subjected to warm temperatures (86?F, 30?C) inside incubators, where each bee completes development from the diapausing prepupa to pupa to adult.  Once adult emergence begins, the bees are taken to the blooming alfalfa fields and are placed in domiciles with empty bee boards.  Here the bees continue to emerge and mate so that the life cycle begins anew.

Alfalfa leafcutting bees have natural enemies, as do all bees. Parasites include chalcid wasps, cuckoo bees, clerid beetles, blister beetles, and predators include insects that feed on stored products (e.g., carpet beetles and dried fruit moths) also may infest boards and destroy developing bees.  These natural enemies are similar to those found in the blue orchard bee.  Control of these pest insects is achieved through precise construction of nesting boards, use of controlled incubation and light traps, installation of insecticide vapor strips in the incubator, dipping of cells in insecticides, and removal and subsequent tumbling cells from the nesting boards. 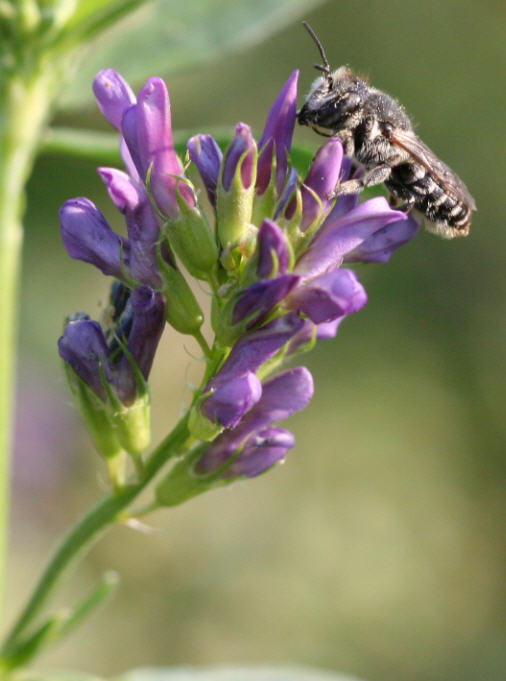 Bee managers are able to use dissection with visual inspection or x-ray examination to accurately estimate numbers of live immature bees that will spend the winter in cold storage and be available to pollinate the next season's alfalfa flowers.  Some growers will manage their own bees, or will buy or supplement their bee stock from alfalfa leafcutting bee suppliers, who are usually in Canada.  Bees raised in Canada are mostly free of chalkbrood disease and pollen balls and, thus, are very important for sustaining healthy populations of leafcutting bees for alfalfa seed production in the United States.  Alfalfa leafcutting bees are also be used to pollinate canola, carrots, and melons.
Female ALCB