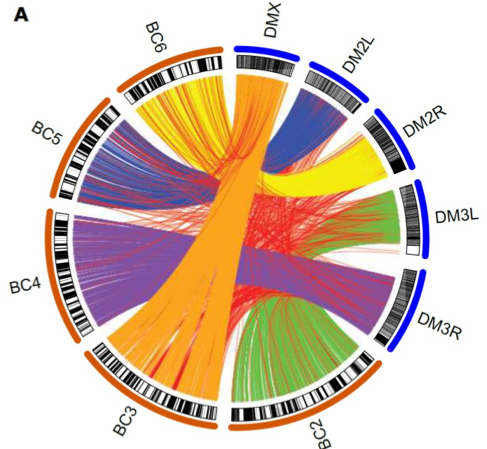 Tephritid fruit flies are a family of insects that represent a threat to global food security due to their ability to attack and infest a broad range of fruits and vegetables worldwide. Their establishment and presence in rich agricultural regions can jeopardize the industry locally and globally. To learn more about the biology of these invasive pests, my collaborators and I build genomic resources for tephritids and other insects that are repeatedly detected at American boarders but are not currently established in the contiguous United States. The figure on the left is a synteny plot comparing one of our study systems, Zeugodacus cucurbitaeto the model system Drosophila melanogaster. Through the integration of modern genomic tools and classical genetic techniques, we sequenced and assemble non-model pests to a similar quality of model systems.

To support efforts for developing novel agents of genetic control of tephritids, we developed methods for inducing heritable mutations mediated by CRISPR-Cas9. In future projects, these methods will be used to create knockout mutations to validate the function of genes and subsequently create phenotypes that are favorable for methods that can be used to suppress and eradicate tephritid fruit fly populations. In the figure above are wildtype and white-eye mutants we created in the species A. Anastrepha ludens, B. Bactrocera dorsalis, and C. Ceratitis capitataand represent the first demonstration of CRISPR in the genus Anastrepha. 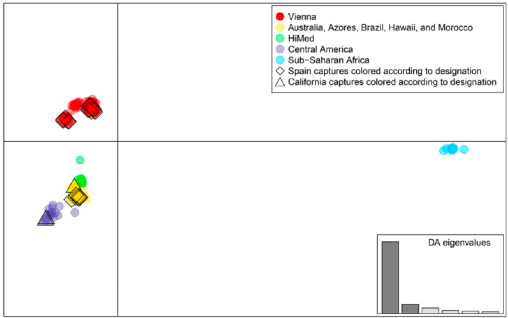 Population genetics allow us to investigate the movement and distribution of tephritids and insects in the context of invasive species biology. The figure on the right represents the population genetic structure of the Mediterranean fruit fly, C. capitata, and the likely origin of flies captured in traps in California and Spain. Notably, a subset of the flies caught in Spain were previously identified as wild incursions when they were identified as intentionally released flies for the sterile insect technique. This is important as an expensive quarantine regime was implemented in response to this inaccurate designation. To prevent the initiation of unnecessary and costly quarantines in the future, we developed a diagnostic assay that can accurately distinguish between wild and SIT flies. 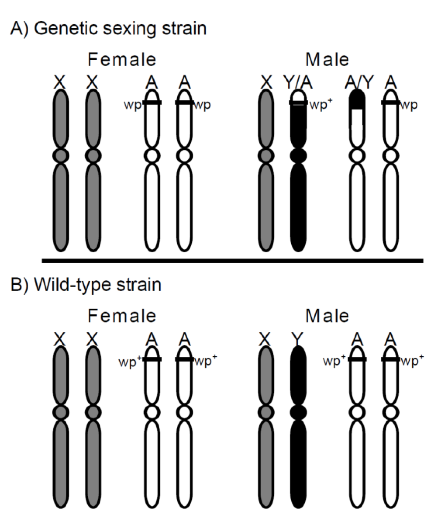 The sterile insect technique (SIT) is species specific method of control that is used to eradicate or suppress the population of fruit flies. The efficacy of SIT programs can be improved by the availability of a genetic sexing strain (GSS) which facilitates male-only releases that are more effective in controlling incipient populations than the release of both sterile males and females. The figure on the left represents what was previously known about the genetic basis of GSS traits, but the genes governing these traits are largely unknown. Through the use of genomic techniques, we identified putative genes and mutations that result in favorable GSS phenotypes. Recreating these genotypes in new pest species will result in the creation of GSSs de novo. 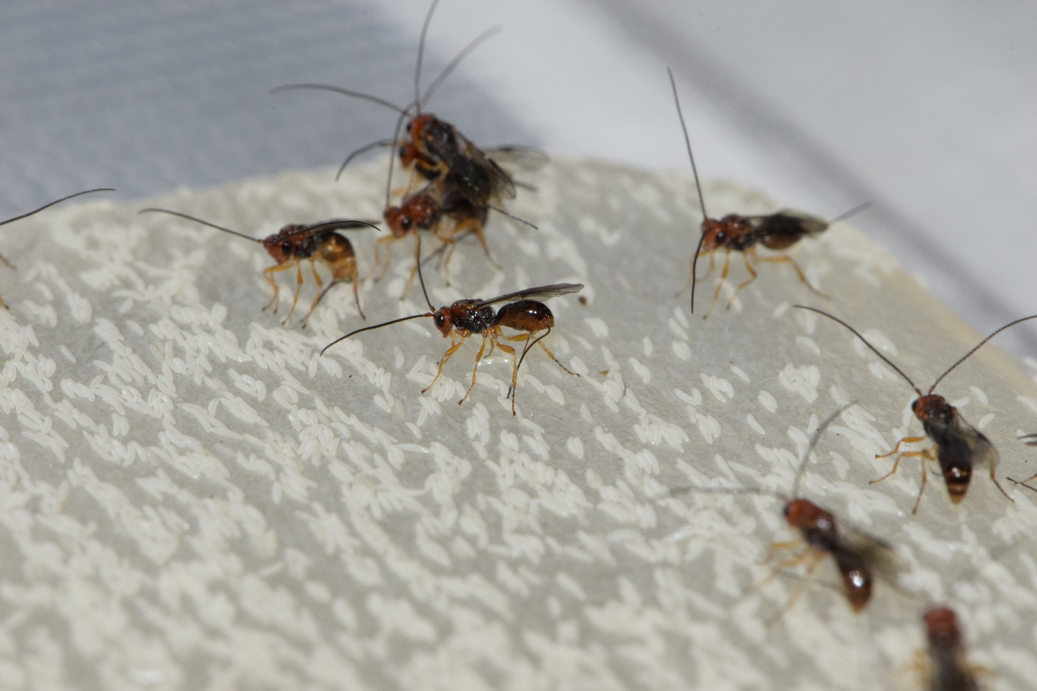 Rearing insects in mass is a large component in SIT, but also in rearing parasitoid wasps that attack tephritids for biocontrol. In the image above, Fopius arisanusfemales are offered fruit fly eggs in which they will oviposit their own eggs. These wasps, are reared in large volumes so that they can be released in fruit fly infested areas for population suppression. As with tephritids released for SIT, mass-rearing traits are selected for, but for parasitoid wasps, it is also important that they maintain their ability to find and attack hosts in the wild. Similarly, it is necessary for mass-reared flies to be able to find and mate with wild females. To determine this, we integrate behavioral assays with genome-wide association studies to develop marker-assisted mass-rearing techniques that will result in the most effective agents for genetic and biological control of tephritid fruit fly pests.