Welcome Drs. Serrano and Buffington to Under the Microscope.

UM – Dr. Serrano, the Asian Giant Hornet has received a lot of attention since a specimen was first spotted in North America in 2019. What are the concerns with this species invading our lands?

JS – Like other invasive species, the presence of the Asian Giant Hornet in the U.S. poses a threat to agriculture and native species. The main reason for concern is the fact that the hornets are predators of other insects, including social Hymenoptera such as honeybees. The hornets are capable of destroying an entire beehive within a few hours after initiating a mass attack on the hive, usually in the late summer or early fall.

UM – You specialize in creating unique attractants which can draw in specific insects into traps. Please briefly explain how you have developed attractants and lures and adapted them for use on the Asian Giant Hornet.

JS – My predecessor, Dr. Peter Landolt (former Research Leader and Research Entomologist) helped develop numerous chemical attractants and trapping systems for numerous species of social wasps, such as yellowjackets, hornets, and paper wasps. Many of these wasp attractants were discovered while testing their ability to attract other insect systems, such as moths and flies.

I am creating various formulations based on Dr. Landolt's research and known wasp attractants to see if any of them will be attractive to the Asian Giant Hornet. I am hopeful that at least one of the formulations will be attractive, because it has been used to capture the other invasive hornet, Vespa crabro (aka the European Hornet). 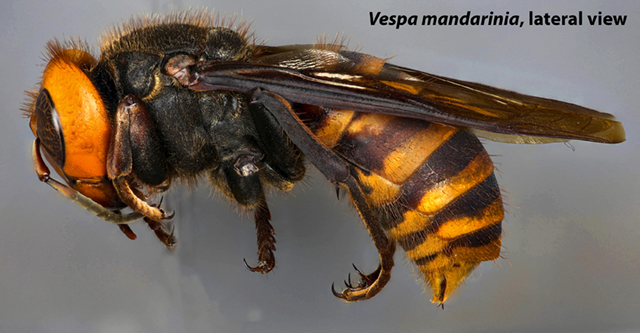 A side view of the Asian Giant Hornet . It is roughly two inches in length, making it the largest hornet in the world.

UM – Are there challenges to instituting these traps in North America?

JS – In theory, no. The traps are fairly easy to assemble, set up, and monitor. In practice, yes. In Whatcom County (WA) where the hornets have been detected, there are many areas where the hornets can nest. This includes large forested areas and places with overgrown vegetation, which are often hard to reach in order to set up traps and will make it difficult to watch out for Asian Giant Hornet ground nests. In addition, the number of traps that can be set up and monitored will largely depend on the labor available to do the work.

UM – What are the procedures for reporting possible sightings or trappings of the Asian Giant Hornet?

JS – Right now, residents of Washington state are encouraged to contact the Washington State Department of Agriculture (WSDA) and submit information about a potential sighting using the "Hornet Watch Report Form," which is an online form where residents can provide photos and relevant information to WSDA. For residents who are participating in the Washington State trapping program, they are supposed to report trap catches to WSDA either by emailing a photo or submitting trap contents. Outside of Washington, residents of other states can call their state apiary inspector to report a sighting of the Asian Giant Hornet after consulting a lookalike guide. 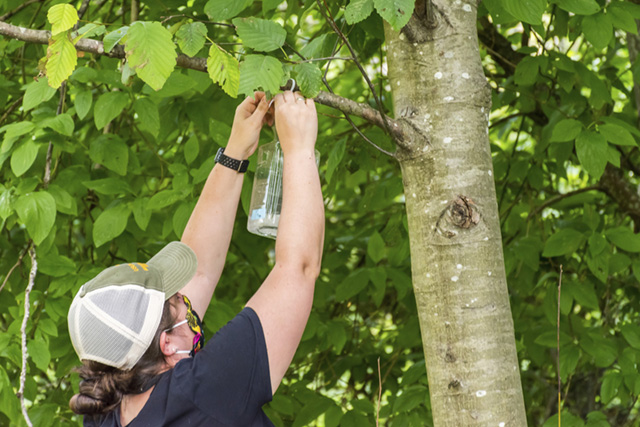 UM – Do you recommend beekeepers make their own lures and traps to protect their bees from the AGH?

JS – I think there are a few things that beekeepers can do, one being with orange juice and rice wine. I do not recommend that beekeepers make their own lures or traps, mainly due to the uncertainty of how effective they will be for the Asian Giant Hornet.

UM – After you successfully capture suspected specimens, what are the next steps?

JS – Well, that depends on whether the specimens are captured dead or alive. If they are dead, then they are sent to experts for identification. If specimens are alive, they can be used to locate an existing nest or to study pheromones and venom gland contents, which could help us develop a more potent lure for use in traps. Live specimens can also be used for the population genetics work that USDA's Animal Plant Health Inspection Service (APHIS) and ARS are jointly working on. 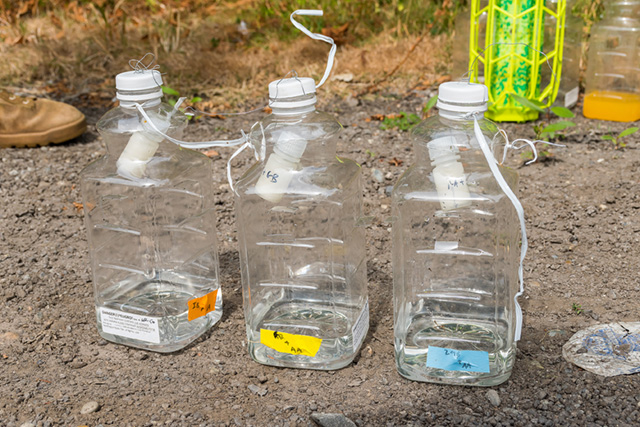 Bottle traps that contain three different lures that may attract Asian Giant Hornet. An effective lure will help with efforts to detect and monitor AGH and can potentially help prevent them from spreading. The lures were previously developed and tested by Peter Landolt (former Research Entomologist and Research Leader) to trap other wasps and hornets. (Photo courtesy of Washington State Department of Agriculture, D4500-2)

UM – Dr. Buffington, you collect suspected specimens like the ones captured by Dr. Serrano's traps and identify them. How do you and your team prepare against invasive species like the Asian Giant Hornet?

MB – Most critically, we have developed a network of people to respond to interceptions. This is at the state and federal level. By having everyone work together, the process becomes very smooth and efficient. The U.S. National Insect Collection at the National Museum of Natural History (Smithsonian Institution) has a nearly complete collection of world Vespa, so I can make a determination very quickly and accurately. Having a resource like the National Insect Collection, which is federally funded and thus always available for use, is critical to U.S. security.

UM – The Asian Giant Hornet has received a lot of press coverage, sometimes with alarming headlines. Are they dangerous or harmful to people?

MB – They can sting, that's for sure. Like bees and other hornets, a sting from an Asian Giant Hornet can cause anaphylactic shock in someone with allergies. Their sting may penetrate a typical bee suit, so experts will wear special suits for these hornets while working to remove a nest. 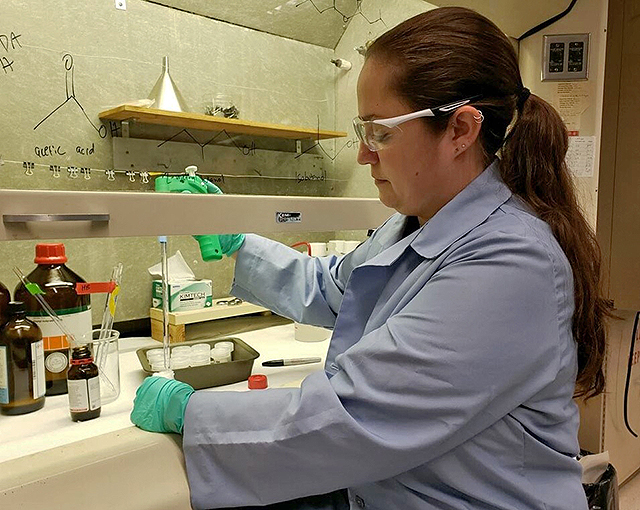 UM – These hornets are relatively common in Asia. What defenses have been established there against the hornets?

MB – There are certainly some cultural responses, including the use of netting and screens. I have even heard of standing guard with a tennis racket, though that sounds woefully inefficient and potentially dangerous.

The best defense in Asia is actually on the bees' side, where members of an Asian honey bee (Apis cerana) hive identify a hornet scout, and before the scout can leave and bring back her troops, the bees swarm the scout hornet and suffocate her….and cook her at the same time!  The bees use muscle activity in their thoraces to raise their body temperature, and by huddling on the scout hornet, they cook her with their own body heat. Quite amazing, really.

UM – What is their impact on our agriculture?

MB – This is the $64,000 question. When these hornets locate a European honeybee hive, the result is disastrous for the bees. And this clearly eliminates honey production from that hive, as well as pollination services provided by that same hive.

For agriculture to be seriously affected, there'd have to be many, many more V. mandarinia nests around such that the numbers of hornets would really impact the number of bees.  In my review of the literature, which comes from Asia, the impact of these hornets typically focuses on humans….as the Asian bees are able to fight the hornets, so the impact is less.

UM – How can this hornet be differentiated from similar large hornets?

MB – The only other hornet in the United States like V. mandarinia is Vespa crabro, the European hornet. These do not have the bright yellow or orange head. APHIS and ARS are working to provide a basic differential diagnosis of V. mandarinia and other large wasps, including cicada killers. We are worried that if all large wasps become targets of homeowners, our native species will be killed unnecessarily. The APHIS website on AGH contains a helpful guide for the layperson that compares this hornet with common lookalike species.

UM – Should people be worried about this hornet becoming established here in the United States?

MB – USDA is working closely with the Washington State Department of Agriculture to ensure that the Asian Giant Hornet doesn't spread to other areas or become established in the United States.

That said, people should always be concerned about the establishment of non-native species wherever they live, be it plants or animals. Non-natives disrupt ecosystem services and agricultural production.  I have seen people get really upset at border crossings and airport customs offices about how their fruits and vegetables are being confiscated.  Well, the consequences of non-native introductions are thoroughgoing and very, very expensive to deal with. Personally, I take this seriously and work to keep species where they originated in their native homes.