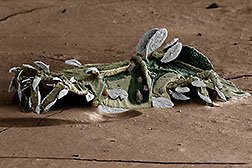 Tenuipalpus spinosaurus Castro, Feres & Ochoa, 2016, (Family Tenuipalpidae). This species was described from the "Cerrado" (Savannah) areas, which are the second largest Brazilian biome. These areas are considered "hotspots" due the great concentration of endemic species. Collecting surveys of the mite fauna present in this type of forest have revealed a great number of new species. These particular mites are associated with the tree Terminalia argentea (Combretaceae) which is an important lumber tree and has medicinal uses. This mite was named "spinosaurus" because the presence of a prominent dorsal crest on its opisthosoma (back dorsal area) which reminds us of the extraordinary crest of the dinosaur, Spinosaurus aegyptiacus Stromer (Spinosauridae). (d3676-1) 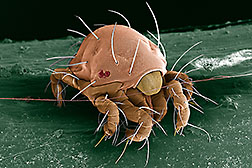 Oligonychus coniferarum (McGregor), 1950, (Family Tetranychidae). This red spider mite is an important pest on conifer trees. The mite lives in colonies, a very thin, loose spider mite web can be produced by the mites, often to protect the small red eggs. The feeding causes a bronzing color of the needle-like leaves. Females are round, reddish, 2 pairs of eyes, few setae (hairs), the immatures and adults have 4 pairs of legs like all mites, however, the larva will have only 3 pairs of legs. (d3682-1) 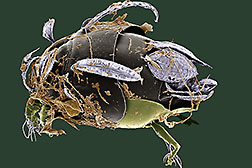 Excelsotarsonemus tupi Rezende, Lofego & Ochoa, 2015, (Family Tarsonemidae). This beautiful mite genus lives in the canopies of the tropical rainforest of Central and South America. This species was named "tupi" is in honor of the Brazilian native indigenous tribe. Using the Low Temperature-scanning electron microscope (LT-SEM) was observed that the gnathosoma (term for head in a mite) has the ability to protract and retract inside the body like a turtle. These mites feed on bacteria and fungi which they often carry on their bodies. The Excelsotarsonemus, have some gorgeous dorsal setae (hairs) which are very broad and with intricate folding patterns. Each seta has strong veins that probably help the mite to raise it, keeping it perpendicular to the body. These sail-like setae might allow the mites to become airborne, gliding within the canopies and colonizing new trees. (d3679-1) 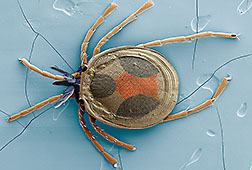 Torrenticola trimaculata Fisher, 2015, (Parasitengona: Family Torrenticolidae). This is a very colorful three-spotted water mite species from eastern North America with a wide-range, and two distinct morphotypes that do not coexist. These mites outer bodies are hardened, and flat to the ground. When they swim they retract the claws like a cat. These mites are important predators and bioindicators of the health of the water in rivers, ponds, and lakes. There still many water mite species in the USA needing ecological and biological studies. (d3683-1) 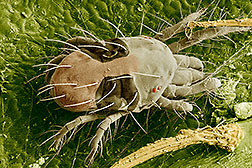 Tetranychus urticae (Koch) the two spotted spider mite, (Family Tetranychidae). Tetranychus urticae is one of the most common species of agriculture importance. The family Tetranychidae includes more than 900 species. All have recognizable mouth parts with the presence of stylets that are modified chelicerae (pinchers). These mites are located on all continents, with many kinds of shapes, colors and forms. All are plant feeding mites and many of them have large numbers of species of plants as a host. If you see fine spider webs on your house plants they are probably a spider mite. (d3685-1)

Buckeye Dragon mite. Osperalycus tenerphagus Bolton & Klompen, 2014, (Family Nematalycidae). This newly discovered species of mites are tiny worm-like mites, which remind us of the Chinese dragon but are about one quarter of a millimeter in length. They have a highly ornamentated integument (skin) and unique mouthparts which consists of a tiny pouch in front of its mouth, chelicerae that burst bacteria or yeast, and then suck in the fluid contents. The Buckeye Dragon Mite was discovered on the campus of Ohio State University, Columbus, Ohio in loam soil. (d3684-1) 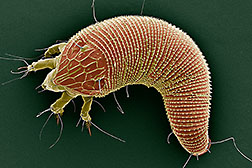 Rose bud mite, Phyllocoptes fructiphilus Keifer. An extremely small worm-like mite, which carries the rose rosette virus. During the growing season the feeding sites of the rose bud mite is at the base of the sepals of the flowers and sometimes at the base of stipules of the leaves. The mites overwinter inside leaf bud scales. These mites are microscopic in size, 90-140 microns in length, and are easily overlooked. It was discovered that these mites carry the rose rosette virus which kills rose bushes within one season. Recently the mites and the virus have been found to be affecting large areas of commercial roses and thus, threatening the US Garden Rose Industry. (d3677-1) 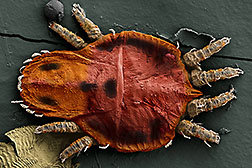 Brazilian rubber tree mite, Tenuipalpus hevae Baker. This mite is consider a major economic pest in Brazil. These flat mites reach high populations on the upper side of the leaves from February to April in the northwestern region of the State of São Paulo, Brazil. High infestations cause leaf rusting followed by plant defoliation and potentially death of small trees. (d3678-1)