Zooming in on Sharpshooters and Spittlebugs

In California's San Joaquin Valley, scientists from the Agricultural Research Service (ARS) have a sharpshooter, and the pathogen it spreads, in their crosshairs.

The sharpshooters and their accomplices, spittlebugs, are carriers – or vectors – of a bacterium called Xylella fastidiosa that causes several incurable plant diseases. In addition to having links to olive quick decline in Italy and citrus variegated chlorosis in South America, X. fastidiosa is known to cause Pierce's disease of grapevine in California.

ARS researchers from the Crop Diseases, Pests, and Genetics Research Unit (CDPG) in Parlier, CA, are aiming to slow the disease by slowing the invasive vector that carries it.

According to Mark Sisterson, research entomologist, sharpshooters and spittlebugs spread the bacterium when they insert a straw-like mouth part into the target plant to feed on its sap. 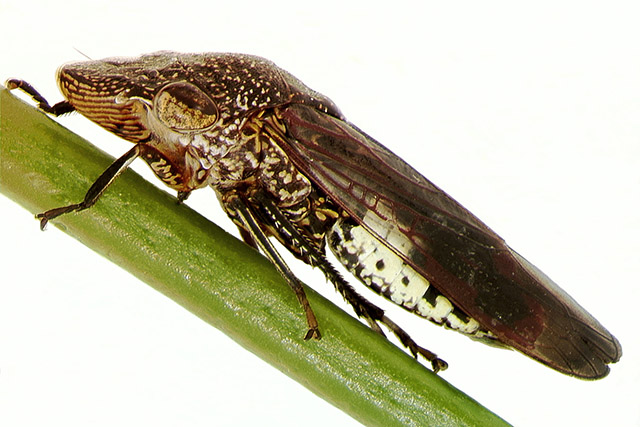 According to Sisterson, there are many different species of sharpshooters and spittlebugs that can transmit X. fastidiosa, with the most important vector depending on geographic region. Management approaches should be tailored to the specific crop and vector in the local area.

Though they have a pretty clear timeline, thwarting a sharpshooter invasion is more complicated than simply spraying fields with a time-tested chemical insecticide; late summer is when harvest occurs, and many insecticides cannot be applied. Further, overreliance on chemical insecticides has led to the evolution of insecticide resistance to some commonly applied products. It is imperative, he said, to develop alternative means to suppress glassy-winged sharpshooter populations, and several ARS scientists at CDPG are working to do just that.

"Craig Ledbetter, a research geneticist, is leading efforts on breeding Pierce's disease resistant table and raisin grapes," Sisterson said. "Deploying resistant or tolerant varieties is one of the most effective approaches to managing plant diseases."

Another research entomologist, Rodrigo Krugner, is working to disrupt mating between sharpshooters by creating "music" that gets them out of the mood. According to Sisterson, developing mating disruption technology for the glassy-winged sharpshooter is an integrated pest management tool that will provide an important alternative to insecticides.

In addition, research plant pathologist, Lindsey Burbank is improving diagnostic methods for accurate identification of vines that are infected with X. fastidiosa. "Rapidly identifying and removing infected vines before they can become a source of inoculum for further spread of the disease is an important component of management," Sisterson said.

"These discoveries are all important for containing the glassy-winged sharpshooter and limiting the spread of X. fastidiosa," Sisterson said. "Development of integrated disease management strategies provides the opportunity to limit the economic impact of diseases and reduce reliance on insecticide applications." – By Scott Elliott, ARS Office of Communications.