Looking Skyward to Take on Major Pest of the Nut Industry

An Agricultural Research Service (ARS) scientist in California is developing a new use for a tool that farmers have had in their kit for over 100 years — aircraft.

Heavier-than-air flying machines have aided agriculture since USDA first teamed with the U.S. Army Signal Corps on Aug. 3, 1921, to spray for catalpa sphinx caterpillars near Troy, OH. Since then, "crop dusters" have helped farmers lay seed, fight pests, spread fertilizer, fight fires, and more. Even drones have gotten into the act.

Charles Burks, a research entomologist with ARS's San Joaquin Valley Agricultural Sciences Center in Parlier, CA, collaborated with researchers from USDA's Animal and Plant Health Inspection Service (APHIS) and University of California Riverside to merge those legacy systems to take on the navel orangeworm, a critical insect pest of California's nut industry. Almonds, pistachios, and walnuts are grown on about 2 million acres in California and contribute over $23 billion to the state's annual economy. 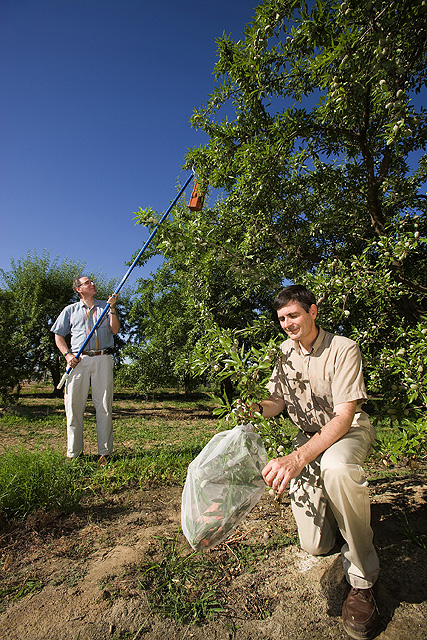 Finding an effective defense against navel orangeworm has been elusive, evolving many times over the years, Burks said, beginning with removing unharvested "mummy" nuts where the navel orangeworm overwinters. Other mitigation and control strategies included monitoring well-timed application of pesticides and using pheromone mating disruption techniques to reduce population growth. Now, researchers are bringing in aircraft to deliver something that has been successful against other insect pests.

According to Burks, sterile insect technique (SIT), the release of mass-reared sterile insects into the field to prevent reproduction of invasive pest species, has been used successfully to eradicate the pink bollworm from the United States. SIT, which sterilizes insects with gamma or x-ray irradiation, is one of the most environmentally friendly insect pest control methods. The major challenge lies in how to introduce the sterile insects to potential mates.

"The project adapts the technology infrastructure built for the pink bollworm to navel orangeworm," he said. "We collaborated with APHIS to rear 20 million sterile navel orangeworm per day and release them over California fields." 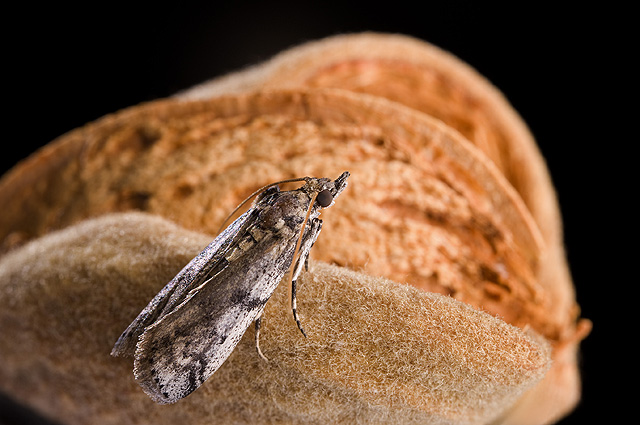 Adult navel orangeworm moths lay eggs on almonds and other nut crops. Larvae that hatch from the eggs feed on the nutmeat. (Photo by Peggy Greb, D1719-2)

Although delivery has been successful, initial laboratory and field examinations revealed that male navel orangeworm were susceptible to injury.

Drones and Unmanned Aerial Systems (UAS) have been used secondarily in this project, Burks said, but release with UAS is likely to become more common in the future.

"Response to invasive pests has been a common use for SIT," he said. "This and other projects demonstrate that it is important to have a capacity for an agile response to such threats, using modular systems, and quickly adapting to key differences in the biology of different insect pest species." — By Scott Elliott, ARS Office of Communications