Food producers are working hard to ramp up production to meet the needs of a world population expected to reach 9.7 billion by 2050. American aquaculture — specifically catfish farming — will help meet these needs with innovations developed by scientists in USDA's Agricultural Research Service (ARS).

Mediha Aksoy, a microbiologist with the Aquatic Animal Health Research Laboratory (AAHR) in Auburn, AL, has increased the weight of farm-raised channel catfish by adding frass from black soldier fly larvae (BSFL) to their diet.

"Insects have gained traction as a potential protein source, and farmers are scaling up insect production to meet increasing demand for protein due to the increasing global population," Aksoy said. Raising edible insects is a growing sector of American business.

In general, farmers raise insect larvae to a certain age and then process them into protein meal and oil for biofuel, which are the primary end products of insect farming. But, as with other animal farming, there's the issue of what to do with the waste. It turns out that frass, which contains larvae waste, exoskeleton sheds, and residual feed ingredients, has excellent potential as a value-added product for insect farmers. 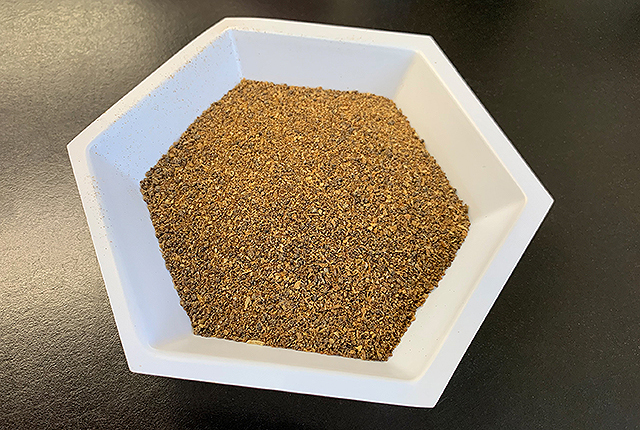 Scientists at the Aquatic Animal Health Research Laboratory in Auburn, AL, have increased the weight of catfish by adding frass, shown above, from black soldier fly larvae to their diet. Frass, a byproduct of the larval meal industry, contains larvae waste, exoskeleton sheds, and residual feed ingredients. (Mediha Aksoy, D4337-1)

Why Frass, and Why Black Soldier Fly?

Black soldier flies can be mass produced and larvae can be raised on traceable organic waste products. They are also viewed as "farmed insects" that are non-pathogenic and do not pose a risk for human, animal, or plant health.

Once dried, BSFL frass resembles a crumbly soil and is loaded with nutrients, Aksoy said. "It contains about 18-21 percent protein, about 5-7 percent lipid, and its amino acid profile is better than that of corn meal and wheat short, making it an attractive candidate as a feedstuff."

Aksoy and AAHR scientists Benjamin Beck and Rashida Eljack added various amounts of BSFL frass to channel catfish feed and compared the results against fish that were fed a control diet without frass. Fish fed a mixture of 10 percent frass weighed significantly more, while fish fed 20 percent frass had the highest weight gain.

"Frass had a specific growth-promoting effect on channel catfish by increasing feed intake," Aksoy said. "It appears that frass is more palatable to fish than the control diet, which featured mainly plant-based ingredients."

Aksoy added that another potential benefit of a frass-rich diet was improved fish health and survivability.

"We were curious whether frass in fish diets would improve innate immune components and the resistance of fish against pathogens," she said. "Indeed, preliminary data suggest that frass can improve the survival of catfish and tilapia from bacterial diseases." 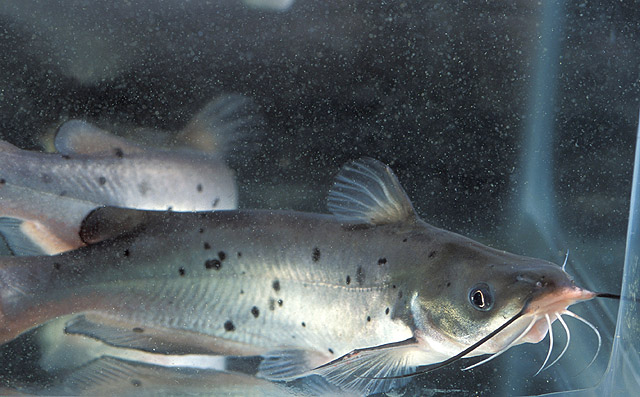 Preliminary data suggests that adding frass, a byproduct of the larval meal industry, to the diet of catfish improves their innate immune components and resistance to pathogens. (Peggy Greb, K10338-1)

As the larvae grow into adults, they molt, which leaves chitin-containing exoskeletons behind. "Chitin doesn't act as an antibacterial; its presence prepares animals to better withstand pathogens by triggering their immune system," Aksoy said.

"Further, chitin may function as a prebiotic by selecting for 'good' bacteria that may prevent growth and colonization of pathogenic bacteria in the digestive tract," she added. "And other insect components and the microbes from the guts of insects might have health benefits for fish."

Why This is Good for Fish Farmers

Aksoy's research shows that replacing some of the plant-based ingredients in the diet with frass makes the diet more palatable to fish, thus increasing voluntary feed intake and growth. Fish food made with black soldier fly frass is currently available commercially.

"We also found that various blood parameters — hemoglobin, hematocrit, and red blood cell counts — were improved with inclusion of frass in the diet," Aksoy said. "This can help the fish cope with the daily and seasonal environmental changes that occur in farm ponds."

Aksoy and her team recently completed trials showing that frass was also effective in improving the growth of other species, such as tilapia and shrimp.

This research was published in Aquaculture Nutrition. — By Scott Elliott, ARS Office of Communications.