It may be winter, but farmers don't stop growing crops or preparing their soil for future planting – and scientists with the Agricultural Research Service (ARS) are there - with the farmers - to help.

"Climate changes pose significant challenges for many cropping systems," said Tom Sauer, supervisory soil scientist at the ARS National Laboratory for Agriculture and the Environment (NLAE) in Ames, IA. "Changes in management practices need to be carefully evaluated to build or enhance the resilience of different agroecosystems."

Researchers at NLAE are midway through a 5-year project, Managing Energy and Carbon Fluxes to Optimize Agroecosystem Productivity and Resilience, to investigate aspects of cover cropping and tillage on farm production efficiencies. The project also looks at agroforestry – tree windbreaks and silvopasture (mixing forestry, forage production, and grazing).

"We have been tracking a variety of metrics for soil organic matter under cover cropping and reduced tillage," said Peter O'Brien, research agronomist at NLAE. "We see some positive trends indicating that these practices may maintain soil carbon levels, in contrast to conventional systems that have declining levels of soil carbon." 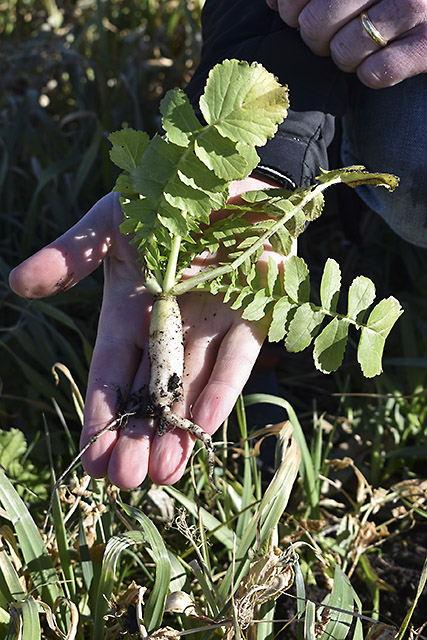 Experiments at the USDA-ARS National Laboratory for Agriculture and the Environment in Ames Iowa are showing how cover crops like this radish can help protect the soil surface and improve soil health following the harvest of primary crops. (Photo by Katherine Kral-O'Brien, D4545-1)

Cover cropping can help keep soil carbon in the ground and out of the atmosphere, thus significantly benefiting the environment, including water quality. Cover cropping encompasses a wide variety of practices. At the most basic level, O'Brien said, it is the practice of growing crops during the part of the year that the primary crops are not in the field, typically in the late fall and early spring.

For example, in the corn-soybean rotations across the Midwest, O'Brien said the amount of time suitable for cover crop growth after primary crop harvest may be limited in comparison to other parts of the country. Consequently, some farmers may sow cover crops, especially cereal rye, into standing corn a week or two prior to harvest to lengthen the cover crop growing window. 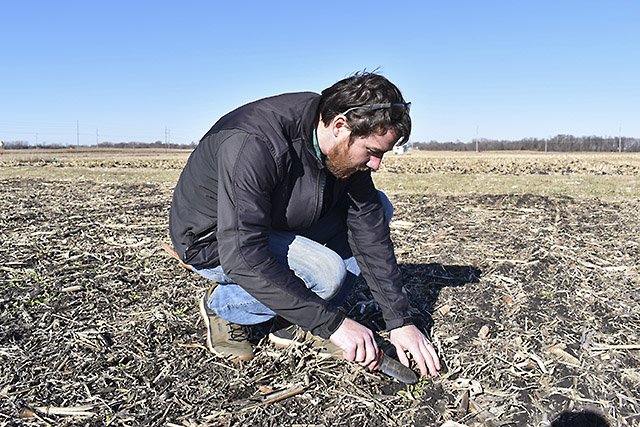 ARS scientist Peter O'Brien, from the National Laboratory for Agriculture and the Environment assesses the establishment of a winter camelina cover crop following corn harvest near Ames, Iowa. (Photo by Katherine Kral-O'Brien, D4547-1)

"Cover cropping can improve soil health in several ways, and healthy soils not only have the potential to increase crop yields, but they may also be more resilient to changing weather patterns," O'Brien said. "Cover crops protect the soil surface from raindrop impact and excessive exposure to sunlight, both of which can break down soil aggregates and lead to erosion."

The ARS scientists are also showing that the non-cover cropping aspects of the project are just as essential to soil health. 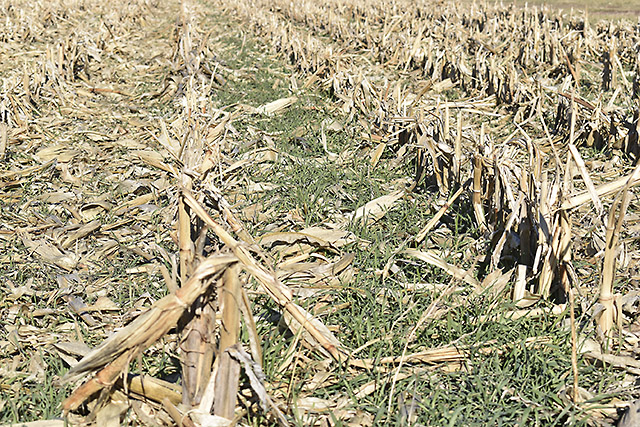 Cereal rye cover crop growing in fall after corn harvest. Scientists from USDA-ARS National Laboratory for Agriculture and the Environment in Ames Iowa are investigating how rye can protect the soil surface and reduce nitrogen losses through tile drainage systems. (Photo by Peter O'Brien, D4542-1)

Farmers can manage these agroforestry practices to reduce losses to their commercial crops from extreme events, particularly heat and water stress association with drought conditions. "Each of these practices can be managed for local conditions or climate trends to enhance their effectiveness in building agroecosystems that are more resistant to negative effects of climate extremes," Sauer said.

"This project contextualizes our goals of enhancing productivity and reducing environmental degradation," O'Brien said. "All aspects of the research are geared towards understanding how our agroecosystems are responding to — and also contributing to — climate change, and it highlights the importance of finding management practices that promote resilience in changing conditions." – by Scott Elliott, ARS Office of Communications.