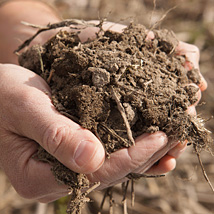 Methyl bromide was used for decades as an all-purpose fumigant to rid the soils of crop-killing nematodes, fungi, and other agricultural pests. But when researchers discovered that it depletes the ozone layer, the United States and other countries began restricting its use to limited types of agriculture. That created problems for a wide range of growers. Nursery operators alone would experience 100 percent crop loss without the fumigants, incurring annual losses of $14.7 million for fruit and nut tree nurseries and $9.8 million for rose nurseries. ARS scientists have shown that anaerobic soil disinfestation (ASD), an organic treatment that temporarily removes oxygen from the soil, is inexpensive and easy to apply, and could become a reliable and cost-effective alternative. But to use ASD, farmers also need a readily available and inexpensive source of carbon to add to the soil. The source also needs to be effective on a broad range of pathogens and pests. Field trials by ARS scientists in Wenatchee, WA, showed that orchard grass is a highly effective and inexpensive source of carbon for use in ASD treatments designed to control apple replant disease. The treatment also had a positive side effect: there were significantly fewer weeds in the orchard. These scientists also found that Brassica seed meal is an effective carbon source and it increases the plant's own resistance to replant disease. With carbon sources such as orchard grass or Brassica seed meal, ASD is a promising alternative to methyl bromide fumigation.


You Want Fries With That? 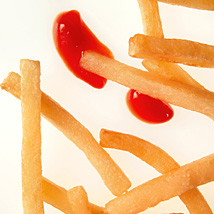 Next time you go to McDonald's, there's a good chance you'll be eating an ARS-developed French fry. ARS scientists released two new varieties of potatoes—'Clearwater Russet' and 'Blazer Russet'—that will be used by McDonald's for French fries. The company has a high bar for its potatoes, having accepted only seven varieties to use in its fries over the years. With an annual farm value of $4 billion, potatoes are a success story in the United States. The vast majority of potatoes are produced in northern States and are processed mostly into fries and chips. But potatoes are highly perishable, and the crop must be consumed, processed, or stored cold immediately after harvest. The problem, however, is that cold storage can lead to an unacceptably dark coloring after processing that makes the potatoes unmarketable. The alternative is to increase production in warm areas of the southern United States. But internal heat necrosis, an internal tuber defect that leads to brown spots, is a major problem in those areas. ARS scientists released the new potato varieties resistant to problems that develop during storage and to heat necrosis. The new releases include the 'Elkton', a new chipping cultivar with high resistance to internal heat necrosis that's proving to be extremely popular among growers in the South. 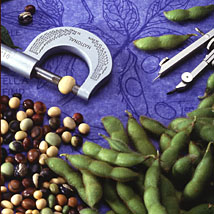 ARS research has led to the discovery of new sources of disease resistance to manage the major diseases that significantly affect the dry bean industry, including the discovery of a bean with resistance to more than 60 different types of damaging rust pathogens. The discovery opens the door to breeding beans with better resistance to those pathogens. ARS researchers also are leading an international collaboration established to release new bean varieties with traits suited to production challenges in different parts of the world where beans are a staple crop. Compared with other foods, beans take a long time to cook, which is a major barrier to getting people to consume more of these affordable, nutritious powerhouses. In an effort to reduce cooking time, ARS scientists discovered that genetic differences exist among beans that determine how long it takes the bean to cook. The scientists pinpointed the genes and transferred them into high-yielding bean plants that are now being used to develop new fast-cooking bean varieties.

Additionally, if pinto beans are harvested late, they can darken prematurely and thereby ruin the crop's market value, resulting in annual losses of more than $30 million. ARS researchers collaborated with researchers at North Dakota State University to develop and release 'Scout', a new pinto bean cultivar that has a slow-darkening seed trait. The new cultivar also has better canning quality than the industry pinto bean standard. These efforts improve the production and quality of the global bean crop, with benefits for growers, consumers, and the bean industry. 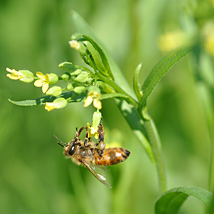 There is a shortage of habitat for honey bees and other pollinators in many Midwestern States. ARS scientists have shown farmers how they can fit two oilseed crops that are good for pollinators—pennycress and camelina—into profitable rotations with corn and soybeans, which are so common in the Midwest. Pennycress and camelina can produce enough nectar on 1 hectare (2.47 acres) to support up to 300,000 bees (two colonies) per year, and growers are beginning to use these crops. They also found that the two crops save water, improve water quality, and keep more nitrogen in the soil-added bonuses for producers. 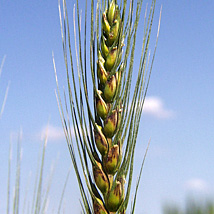 Wheat is one of the world's most important food crops, providing 20 percent of all protein and calories in the human diet. But wheat scab remains a major threat to profitable production and a reliable supply, both in the United States and overseas. Scab reduces yields and grain quality and produces a toxin that can make people and animals sick. Work by the U.S. Wheat and Barley Scab Initiative, an ARS-led coalition, has reduced scab losses eightfold since 2004. ARS researchers are also using disease-resistant varieties of wheat to help farmers combat wheat scab. They have developed a Web-based tool and text-alert early-warning system that lets farmers know when conditions for scab have reached critical levels, so they can take steps to combat the threat by applying fungicides in their fields. 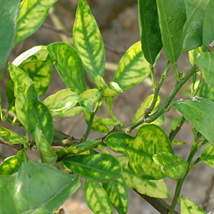 Citrus greening has devastated Florida's $9 billion citrus industry. Since its discovery in Florida in 2005, citrus greening has caused more than $4 billion in economic damage and wiped out about 8,000 jobs. The disease has also been found in California and Texas. There is widespread fear that the entire U.S. citrus industry will suffer from a serious epidemic.

Developing controls for citrus greening has been particularly challenging. It requires an in-depth understanding of the biology and physiology of citrus trees, the insect pest that transmits the disease (the Asian citrus psyllid), the disease-causing bacterial pathogen Candidatus Liberibacter (CLas), and their three-way interaction. Additionally, scientists are yet to be able to culture CLas—a critical step in learning how to control the bacterium.

ARS scientists in Fort Pierce, FL, have made significant progress in helping the State's citrus growers, providing management approaches that should prove effective also in other States. Working with a commercial partner, they are studying the effectiveness of two new antibacterial spray treatments (oxytetracycline HCI and streptomycin sulfate) that show promise for improving tree health and yield. Study results from ARS researchers and two independent industry researchers show that treatment with the two antibacterial compounds resulted in 15 to 17 percent higher yields in treated groves after just 1 year of treatment. ARS researchers and collaborators are continuing these studies to see if yield and tree health continue to improve with subsequent year treatments. Scientists also provided research data so Florida growers could secure State and U.S. Environmental Protection Agency (EPA) approval to begin using the treatments as emergency measures. These antibacterial compounds are already approved for use in a variety of commercial tree fruit orchards, including apple, peach, and pear. ARS researchers are monitoring the citrus groves where these compounds are now being tested to evaluate their effects on soil, leaves, and trees overall. To complement the antibacterial treatment approach, ARS scientists have released four new varieties of rootstock—the lower part of a tree—that show improved tolerance to citrus greening. In addition, they have identified new sources of disease resistance in citrus relatives from the ARS Citrus Germplasm Collection that show promise for breeding delicious new citrus greening-resistant citrus varieties.