July is National Watermelon Month, but most people don't know that watermelons have been brought to you by USDA's Agricultural Research Service research.

In 1954, Charles Fredric Andrus, with ARS's U.S. Vegetable Laboratory in Charleston, SC, developed the Charleston Grey, considered the classic watermelon variety. Today, the Charleston Grey—which has great flavor, an oblong shape, a hard rind that makes it easy to stack and ship, and, even more importantly, extensive disease resistance—remains a variety of choice for home and commercial growers. It is in the pedigree of 95 percent of the watermelons grown in the world today. 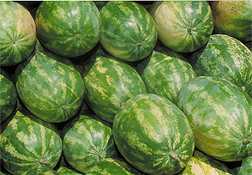 Farmers in 44 States grow more than $500 million worth of watermelon commercially every year, with Georgia, Florida, Texas, California, and Arizona as the leading watermelon producers.

Watermelons originated in Africa somewhere around the Kalahari Desert. By the 10th century, watermelons were being cultivated in China, which is now the world's single largest watermelon producer. The Moors introduced the fruit to Europe in the 13th century.

Watermelons were being grown in Massachusetts in 1629, and Native Americans were known to be growing them in 1664. Some food historians believe that African slaves helped introduce the watermelon into the United States.

So, the watermelon has been grown in the United States for more than 300 years. But when ARS geneticist Amnon Levi, who today leads the watermelon program at the U.S. Vegetable Laboratory, did a DNA analysis of heirloom and current varieties, he found that all of our watermelons are just about genetically identical, making the fruit vulnerable to devastation by a single disease or pest. 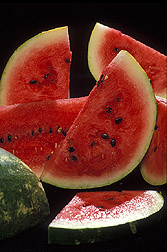 ARS also has more than 1,600 watermelon lines from different parts of the world in a germplasm collection housed in Griffin, GA, which may provide genes for important new traits.

Other research that ARS has underway includes developing better ways to produce watermelon with less pesticide spraying and with alternatives to the now-banned methyl bromide, which is a soil fumigant and nematode treatment. One idea that ARS is considering is to graft watermelon vines onto rootstocks that are more resistant to diseases and pests. ARS is also working on ways to speed production so that farmers can go from flowering to market-ready fruit in only 5 weeks. 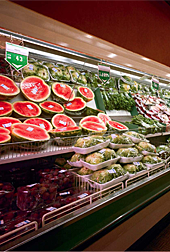 Thumping for ripeness is an old wives' tale that claims the deeper and heavier the thump, the riper the watermelon. But that thud can also indicate an overripe, mushy-centered melon.

Rinds of Charleston Greys are glossier before they are ripe and become more satin or matte when they are ready to eat. Also, on the bottom where the watermelon rests on the soil, there is usually a light green to white "bald spot." When this bald spot changes to pale yellow or cream, the watermelon is ripe. Uncut watermelon stores best for up to 2 weeks in a cool, dry environment at around 45 to 50 degrees F. You can cover cut watermelon with plastic wrap and refrigerate it for up to 3 days without hurting flavor or texture.

Watermelons are about 6 percent sugar and 91 percent water. They are usually a good source of vitamin A, vitamin C, and lycopene.

Refrigerate for 1 hour or more. Serve with chips or as a garnish for chicken and fish.

Recipe courtesy of the National Watermelon Promotion Board.