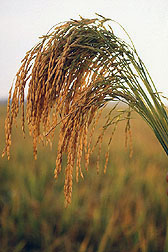 Rice is a food staple for more than half the world's population. U.S. demand for rice is growing, with Americans consuming more than 26 pounds of rice per person annually, and with 20 billion pounds of rice being produced each year. USDA-ARS researchers in Texas and Arkansas have developed eight rice varieties that have resulted in new and improved rice products, and expansion of the organic rice industry.

Carolina Gold Select— being grown for specialty markets—"historically authentic" foods. Is grown organically and is marketed to about 3,000 chefs across the country by Anson Mills, Columbia, SC. Carolina Gold is credited with establishing the U.S. rice industry.

Neches— a waxy rice variety grown under organic production for use by the ingredients industry. Most waxy rice is imported from Thailand. This is the first waxy variety developed for southern U.S. production; it will give domestic growers an opportunity to capture a market that has been traditionally filled by imports. 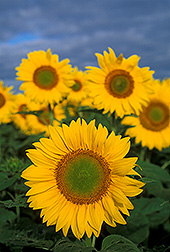 Sierra— aromatic long-grain rice developed to compete with basmati-style rice, which is imported from India and Pakistan. Sierra is being grown under both conventional and organic management systems. It is being marketed by Doguet's Rice Mill, Beaumont, TX, as both milled and brown rice to companies like Whole Foods Market.

Dixiebelle— long-grain rice that is well suited for use by the parboiling and canning industries. It is currently being used by a major canned soup company, and is under contract production for this use.

Sabine— long-grain variety that is well suited for use by the parboiling and canning industries. It is currently being used by a major parboiling company for producing quickcooking rice.

Hidalgo— developed as part of a cooperative research agreement with a major food supplier. It is a long-grain variety that, when processed, produces a brown rice that can be cooked in just 10 minutes. This gives consumers the higher nutritional value of brown rice with more convenient cooking times.

Presidio— long-grain rice variety with exceptional milling qualities and grain appearance. It produces a superior packaged product and commands a premium in the market for growers because of its high quality. It also has excellent disease resistance, reducing the need for fungicides. It also produces high yields per acre for farmers. It is being grown on significant acreage in Texas under both conventional and organic systems.

Rondo— long-grain variety that originated from a Chinese accession identified in the USDA world rice collection. It is a shorter plant and matures earlier, making it more suited for U.S. production. It has outstanding disease resistance, high yield potential, and has the ability to outcompete weeds. It is being grown under conventional and organic production systems, and is being used for the rice flour and rice milk markets.